When and Where to Focus Your Listing in February 2021

Despite the impacts of Circuit Breaker still fresh in our minds and COVID-19 still a pertinent issue in our foreseeable future, the property market in Singapore has defied the odds.

Property sales remained steady despite rising prices and new form of demand has risen with our ‘new normal’ – people are increasingly realising the importance of home.

As seen in our recent PropertyGuru Consumer Sentiment Survey H1 2021, 49% need more personal/family space. This was an expected outcome of the nation undergoing Circuit Breaker.

Suddenly the same amount of space where you called home, is now expected to be much more – office, school, tuition centre, cafeteria etc. Suddenly the same space that we looked forward to returning to after a day outside in our urban jungle, has become its own sort of jungle.

Which explains why more and more people are looking for more space – this means, your clients are on the move and you need to be there to help!

When to Focus Your Listings

Similar to trends during Circuit Breaker, it seems that the day of the week with the highest traffic in January 2021 was actually Tuesday. This could be due to the fact that most office workers have had to clear leave in December, even though we’re unable to travel out of our island city. So, their lifestyle might’ve mimicked what it was like during Circuit Breaker. 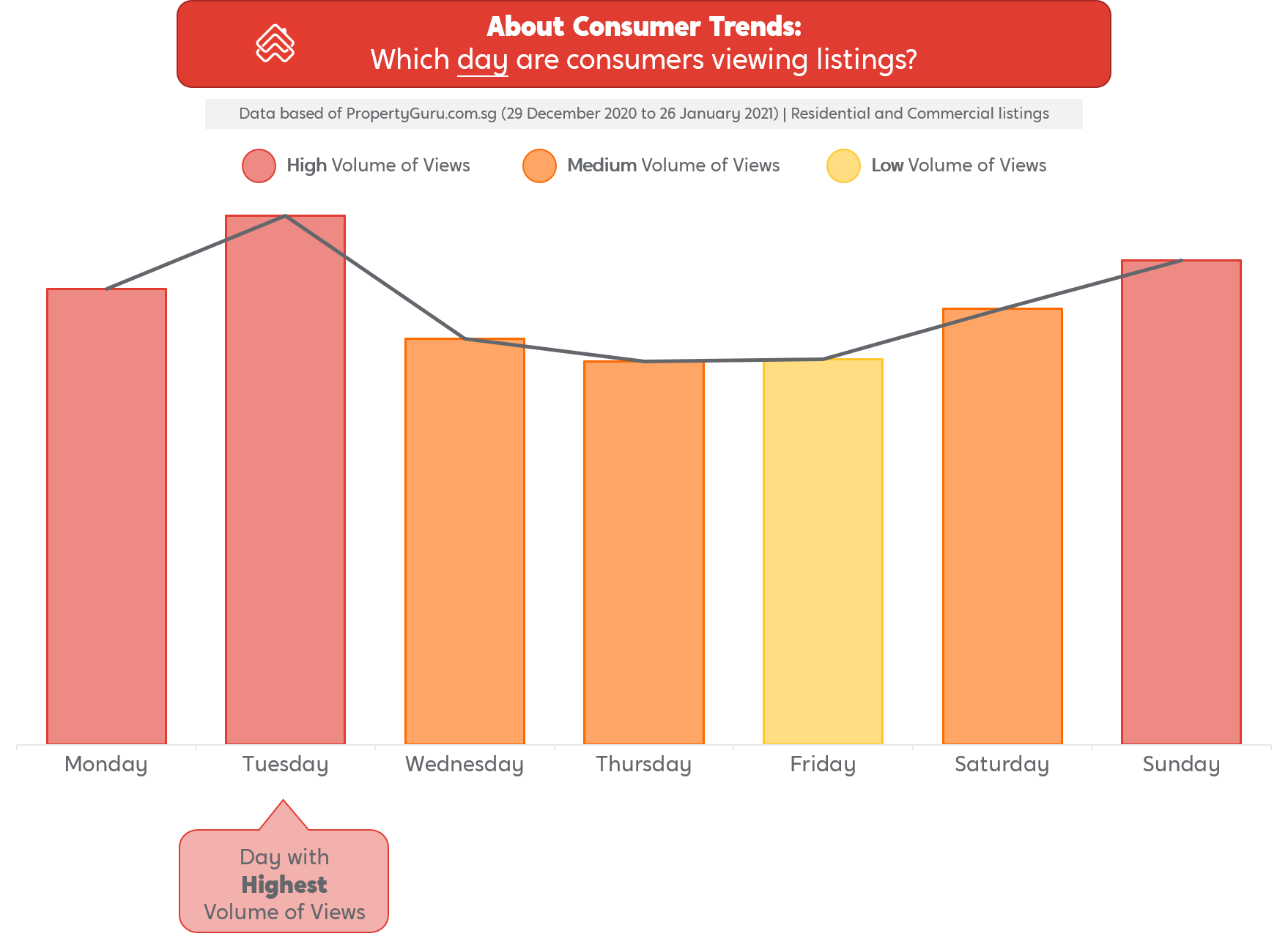 However, don’t discount Sunday and Monday! Traffic still continues to hold strong during those days.

The day with the least amount of traffic continues to be Friday – where we envision them to be relaxing or probably out at viewings with you!

Even though the day of the week with the highest traffic is the same as Circuit Breaker period, the time of the day didn’t follow the same trend. 12PM to 3PM continues to be the timeframe with the most traffic through the day – but what is interesting to note is that the traffic during 12AM to 3AM increased significantly from last month. It still pales massively in comparison to the more ‘regular’ hours of the day, of course. But let’s just keep a lookout for this in the upcoming months!

Where to Focus Your Listings

When it comes to the districts with the highest listing views, Serangoon/Thomson (Districts 19 to 20) continue being the most popular – which is pretty much the same as previous months.

However, what’s really interesting this month is the market gap! Whilst the district with the largest market gap (too much demand, too little supply) remains to be Changi/Pasir Ris (Districts 17 to 18), it is worthwhile to call out that property seekers’ demand is exceeding listing supply in all districts.

If you look at the gaps in our January 2021 edition, districts like Newton/Bukit Timah (D11, 21) and Serangoon/Thomson (D19, 20) had small market gaps – as there were already enough listings to meet demand.

However, in our most recent findings, it seems that property seekers are looking all over Singapore for properties to view and there simply aren’t enough listings to go around! 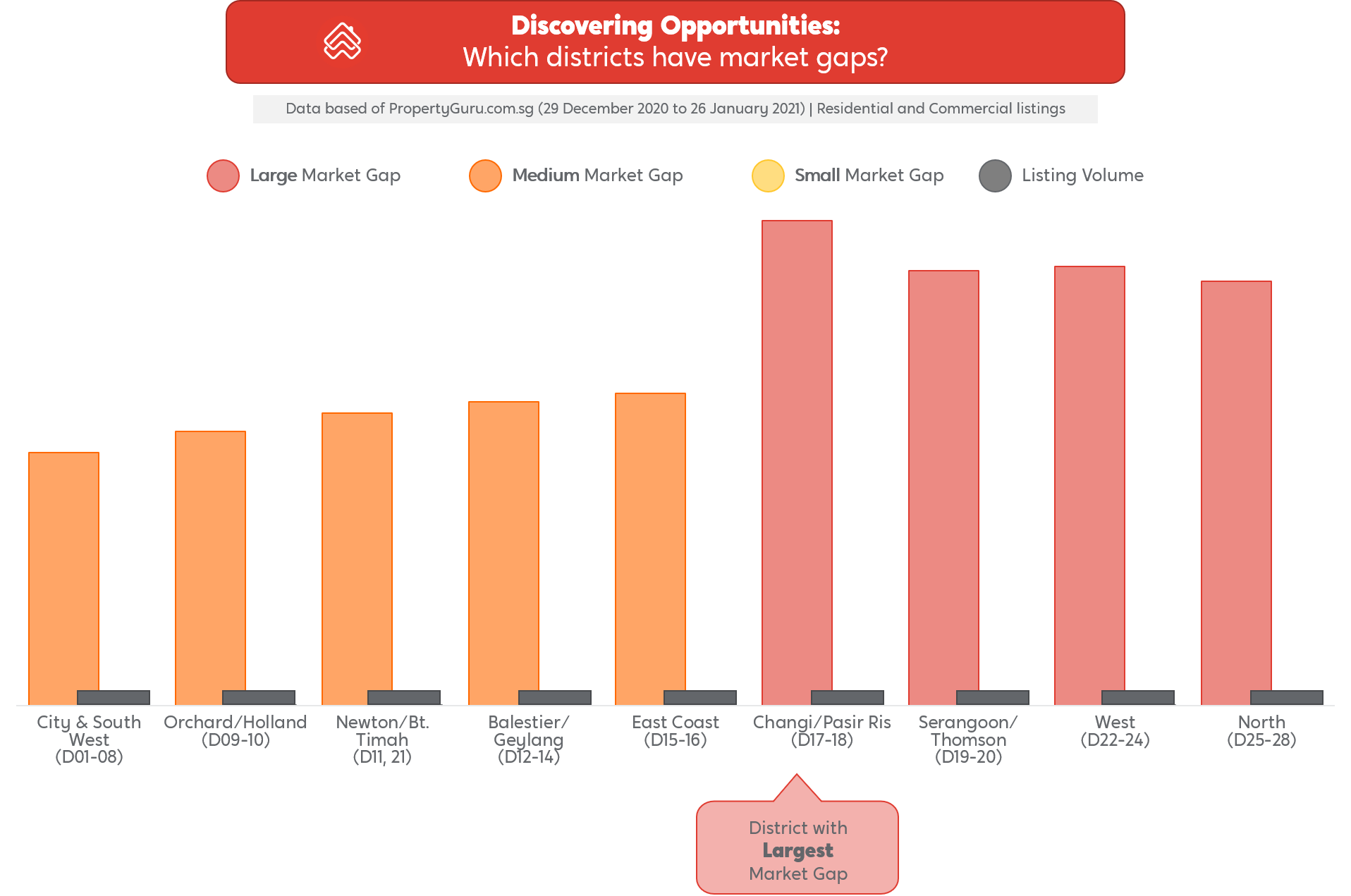 So, time to head over to your trusty AgentNet and get those amazing listings up!

In the meantime, here’s a Happy Lunar New Year in advance!

Being a better partner for you,
PropertyGuru Team