Come August 2021, the Jurong East BTO launch is set to be one of the most anticipated HDB projects. After all, it’s been 10 years since the last BTO launch in the non-mature estate. The previous launch was all the way back in September 2011.

Located close to the Jurong Lake District that’s set to be Singapore’s second CBD, residents can look forward to exciting developments in the years ahead.

The launch will see only 560 units of 2-room Flexi, 3-room, and 4-room flats being offered in Jurong East, so you can count yourself really lucky if you manage to secure a unit here! 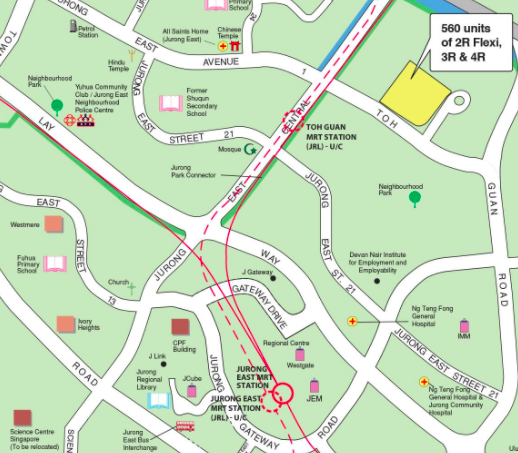 Want to get your HDB home in Jurong East much earlier? Browse the latest listings for Jurong East resale flats on PropertyGuru.

The Jurong East BTO project will be located close to the heart of Jurong East estate, providing residents with convenient access to public transport, malls, and healthcare facilities.

The upcoming Toh Guan MRT will be within walking distance from the flats. Alternatively, residents can take a bus to Jurong East MRT or the bus interchange to travel to other parts of Singapore.

With JEM, Westgate, JCube, and IMM all within a bus ride away, residents will not need to travel further to satisfy their retail needs and dining cravings.

In addition, the flats will be located just a few streets away from Ng Teng Fong General Hospital.

As the government plans to have a second CBD in the form of Jurong Lake District, residents can expect more job opportunities closer to home.

Prices for the August 2021 Jurong East BTO will only be released during the launch itself.

Nonetheless, prospective balloters can look at the prices for the September 2011 and factor in some inflation for a rough gauge.

Despite being located in a non-mature estate, flats near the upcoming BTO project have commanded a decent resale value. 3-room and 4-room flats were sold for as high as $339,000 and $540,000 over the past year.

This means some existing owners of the September 2011 BTO flats could stand to profit by at least double the purchase price of their BTO unit!

Despite the western location, residents will still enjoy great connectivity and accessibility to the rest of the island.

The Jurong East BTOs will be one of the projects in the August 2021 launch that’s situated within walking distance to an MRT. Set to open in 2027, the upcoming Toh Guan MRT on the Jurong Region Line (JRL) will be only four minutes away by foot.

When the JRL is fully operational in 2028, residents can reach other parts of Jurong such as NTU more quickly.

Jurong East MRT will also be one stop away on the JRL. This means that residents can easily switch to the North South Line or East West Line to travel directly to places like Ang Mo Kio and the CBD.

The area will also be served by the future Cross Island Line, although no dates have been announced yet. Connecting the eastern and western regions of Singapore, the new MRT line will cut down travelling time to areas such as Changi.

The area around Jurong East MRT and bus interchange is also home to a number of malls. From JEM to Westgate and JCube, residents will be spoiled for choice.

Bargain hunters can also look forward to snagging deals and discounts of their favourite brands at IMM, which can also be reached by bus in 10 minutes.

Jurong Lake District in the vicinity

Set to be the second CBD in Singapore, Jurong Lake District will comprise new commercial spaces, residential areas, and greenery. Job opportunities set to be available include engineering and sustainability-related services.

Apart from having job opportunities closer to home, residents can look forward to more lifestyle attractions. A new integrated tourism development will be available from 2026 onwards, featuring attractions, restaurants, retail shops, and a hotel.

The general hospital is also integrated with Jurong Community Hospital, which focuses on post-acute and rehabilitative care.

Other notable amenities in the vicinity include Chinese Garden and Japanese Garden, both of which will be a 30-minute bus journey from the flats.

Both parks are currently undergoing rejuvenation, and will be re-opened from 2021 onwards as part of Jurong Lake Gardens.

Conclusion: Is This Jurong East BTO Worth Balloting for?

The August 2021 Jurong East BTO project will be suitable for those who wish to live within walking distance of the MRT, yet not mind living further away from the city centre.

Located in western of Singapore, the Jurong East BTO flats will be ideal for those who won’t mind a longer travelling time to other parts of Singapore.

While there are two schools within 10 minutes walking distance from the flats, very few schools are available in the area.

However, the project will be surrounded by various amenities such as malls, parks, and healthcare facilities. Office spaces such as JTC Summit and International Business Park are also in the vicinity. Coupled with the development of a second CBD in the form of Jurong Lake District, residents may not need to travel out of the estate as much.

The Jurong East BTO project may also be among the cheaper developments in the August 2021 launch due to its location in a non-mature estate.

At the same time, given that it’s been a decade since the last BTO launch in the district, it’s set to be one of the most contested projects. So expect a tough fight if you’re balloting for the project!

How long is the wait for BTO?

The wait is generally around three to four years. However, the pandemic has led to delays in construction. As such, you can expect a BTO to be completed in as long as five years.

How much is the downpayment for a BTO?

This depends on the selling price of the flat and the type of home loan you’re taking. Typically, the minimum downpayment is 10% for HDB loans and 25% for bank loans.

Can I apply for two BTOs?

Yes, you can do so through the Multi-Generation Priority Scheme if your parents are also applying for the same BTO project. Do note that the BTO project chosen must consist of either 2-room Flexi or 3-room flats.

While you’re here, you might to learn more about the other estates in the August 2021 BTO launch:

Virtual vs Face-to-Face Viewings: Which is Better?