Hungry Ghost Festival: Are Singaporeans Superstitious about Buying and Moving House During the Seventh Month? (2021)

During the Hungry Ghost Festival, we know not to commit booboos like stepping on or over food offerings. Also, depending on how much of a scaredy-cat you are, you might make sure to return home before sunset too. But have you heard of people observing property superstitions during the seventh lunar month?

More ‘pantang’ folks tend to avoid making property deals during this ‘inauspicious’ period. With much of the Singaporean population being ethnically Chinese, this usually has a significant effect on the property market.

However, property buying trends for the same period in 2020 and 2021 seemed to have bucked this trend. So, are Singaporeans casting aside tradition and superstition to buy property even during the Hungry Ghost Festival?

Before we look at the data surrounding property buying, let’s talk about the property taboos surrounding Hungry Ghost Festivals.

When the gates of Heaven and Hell spring open, spirits are given a pass to roam the realm of the living. Offerings of food and incense are made to appease these ghosts and to prevent them from causing mischief.

Chinese people believe that if you embark on a major life change during the seventh month, you’re bringing bad luck to you and your home. You would want to pay attention to these actions:

Now we understand the why behind these ‘no-no’s, let’s take a look at transaction volume trends from 2018 to 2021.

In the years 2018 to 2021, we’ll be looking at data in July through September as the Hungry Ghost Festival fell on these dates:

We headed over to URA to get data on both new and resale figures for landed and non-landed transactions (including executive condominiums or ECs).* And this is what we noticed.

Browse all condo units for sale on PropertyGuru.

Browse all HDB resale flats for sale on PropertyGuru.

Based on the above, here are our key findings:

1. Q3 2018 and 2019 Transaction Volumes Were Affected by Hungry Ghost Festival and Cooling Measures

2018 stayed true to the trend, and we saw a big dip from July to August. We know new private home sales dropped 64% in August 2018. We also know this sharp decline was aided by a round of cooling measures introduced in July that year. The Additional Buyer’s Stamp Duty has since remained unchanged.

Over at the HDB resale market, the number of transactions also tanked, with a modest recovery from August to September. The tighter Loan-to-Value (LTV) limits probably limited the amount buyers could borrow from banks, thus affecting property sales.

Again in 2019, we saw a dip in the HDB resale and private property market transactions, though not quite as dramatic as the previous year. Effects of the property curbs lingered as HDB upgraders were yet again more cautious. The number of condo purchases dipped during this period.

But in 2020, we actually saw month-on-month growth from July through September in both markets. Property prices and demand rose despite Singapore going through its worst recession since 1965 and the mass exodus of foreign talent.

Think back to when we were only half a year into dealing with the pandemic. We were new to dealing with home-based learning and work from home arrangements. It’s now clear COVID-19 isn’t going anywhere, and we’re beginning to realise how little space we have at home.

Using cardboard boxes as a makeshift home office table is no longer funny, and we’re looking up articles like “How to Turn Your Apartment Into the Perfect Work-From-Home Office for Maximum Productivity”. The result is a movement towards buying larger homes.

BTO construction delays have begun to take effect, pushing young couples into the resale HDB market too. Singaporeans, being ever-practical, see that demand and prices are only climbing. The practical thing to do? Buy when you score a good deal, superstition be damned.

Andrew Nair, Associate Division Director for ERA Realty Network confirms this. Typically, the ‘best’ time to buy a property is during Chinese New Year and the seventh month as only the most sincere or desperate sellers will allow viewings. This could improve your chances of scoring a good deal.

“We see that the resale supply is very low at this point. Sellers have sold their units and cannot find replacement homes. Buyers’ viewings now are mainly very sincere and/or desperate. Most of our transactions during this time are expedited.”

In a way, the power used to lie with buyers but now, the script has flipped.

He adds that there is “a lot of fear” among buyers, who feel prices from homes will only increase if they wait. The result? An increasing number of HDB flats sold with a high Cash Over Valuation (COV) and more buyers willing to purchase a home after only having done virtual viewings.

After what feels like a very, very, very long and difficult time, we finally made it to 2021. For private property, the transaction volume decreased month-on-month from July through September.

While the graph does follow the Hungry Ghost Festival trend, there is another explanation for this dip.

July was an exceptionally good month for sales, the second-best in 2021 so far. In the private property market, some developers wanted to close more deals prior to the seventh lunar month and buyers may have been afraid to be ‘priced out’.

We already knew it was impossible to sustain such a high volume of transactions. That’s why it makes sense that transactions dipped in August and September. But if you compare the monthly figures year-on-year (from 2018 through 2021), there is still annual growth observed.

Over at the public housing side of things, HDB resale prices rose for the 13th straight month in July. It continued climbing in August, before dipping slightly in September. These figures still buck the Hungry Ghost Festival trend and show no signs of abating.

That’s to be expected since the unhappiness for BTO construction delays reached a high point in late August and a contractor went bust. Young couples and families with urgent housing needs have since been given the option to cancel their BTO flat at no cost. 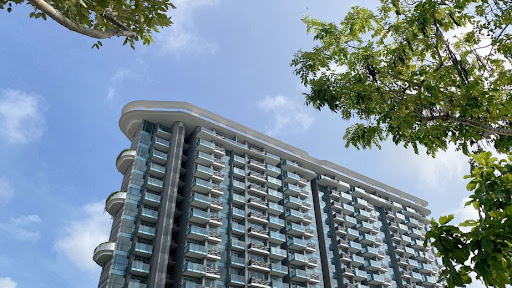 We’ve discussed the buyers’ property-buying behaviour during the Hungry Ghost Festival period. What about the developers?

Generally, developers adhere to these Chinese superstitions and put off launching new projects prior to the seventh lunar month. In 2018, developers didn’t release many new launches in August. There were only 534 new units (including ECs) available, compared to July’s 2,239 units.

It was the same tale in 2019. August 2019 saw developers selling 1,122 units, of which 70% were from previous launches. Parc Clematis was only launched two days after the ‘unlucky’ month that year.

Normally, adopting a ‘better safe than sorry’ attitude when it comes to superstition is a safe move to boost the chances of having great weekend launch sales. But you forget, these are unprecedented times.

The restrictions put in place during the pandemic made it much more difficult for potential buyers to turn up at show flats. Developers, buyers, and sellers had to adapt, leading to the rise of virtual viewings. Someone even bought a $2 million house without physically heading down!

Perhaps fearful of more COVID-19 curbs on the number of persons allowed in show flats, developers launched when measures seemed to ease. Of the 3,791 units launched in Q3 2020, August saw 1,582 new condo units put on sale. At that point in time, this figure was the highest number of units launched in a month so far.

Of the top eight most popular condos for the year, NoMa was launched on 29 August, right smack in the middle of the Hungry Ghost Festival. Other projects that made the list were Forett at Bukit Timah (launched 8 August 2020), Verdale (launched 19 September 2020), and Penrose (launched 26 September 2020), all launched slightly before or after the seventh lunar month.

In 2021, there weren’t many launches in Q3 2021. Still, it seems developers don’t mind launching during the Hungry Ghost Festival as much. The Watergardens at Canberra achieved 60% sales on its launch weekend (28 to 29 August). That same weekend, Klimt Cairnhill was launched too. The first weekend after the seventh month, Parc Greenwich sold 65% of units on its launch weekend.

Moving Forward, What Can We Expect from the Private Property and Resale HDB Market?

We already know COVID-19 and having WFH arrangements have altered the way we shop for homes. Aside from the preference for larger spaces and shift away from central locations, URA and HDB flash estimates also suggest that prices are expected to rise, albeit more slowly, in the coming months.

For those purchasing private property, it’s likely the fear of being priced out that propels them to buy now. Likewise, for their HDB-buying counterparts, the repeated and prolonged BTO construction delays drove them towards the resale market.

Ultimately, people are snapping up property, Hungry Ghost Festival or not. Practicality looks to have trump superstition as COVID-19 seems to be the biggest factor in affecting buying patterns.

Take everything with a pinch of salt, if you will. Even the superstitious have ‘workarounds’: kicking off renovation works before the seventh month, viewing property at about 1.00pm at the height of day, bringing along a ‘lucky’ friend when looking at a house, and so on.

Is It Ok to Buy a House during Ghost Month?

If you aren’t superstitious, it’s as good a time as any.

What Should You Not Do at the Hungry Ghost Festival?

How Long Does Hungry Ghost Last For?

The seventh lunar month lasts typically for one moon cycle or about 29 days.

Can We Do Renovation During 7th Month of Lunar?

It’s considered inauspicious to do so as you may disturb and incur the wrath of spirit with the noise and construction.

Home Away From Home: Why Serviced Residences?