Approximately 3,250 flats will be launched across three projects in Queenstown for the November 2022 HDB BTO launch. The new flats in the estate comprise around one-third of the total number of flats to be launched. It also includes the highly anticipated Dover Forest / Ulu Pandan BTO.

HDB hasn’t released the price range yet. So for now, you can refer to SRX’s estimations based on nearby resale transactions and launch prices from recent BTO launches.

Source: SRX. These estimations have been adjusted for differences in property age and location. If a launch is nearer to an MRT or commercial development, it’s likely to be more expensive.

Based on these pricing forecasts, we can estimate the downpayment, monthly instalments and household income needed to pay for the November 2022 Queenstown BTO flat. These estimates are based on the following assumptions:

To illustrate, we’ll use the median of the price range and won’t be taking into account any CPF grants or savings to be used. We’ll also be using a mortgage calculator to do the math.

And for public housing, you can only use up to 30% of your monthly household income to service the home loan. This is called the Mortgage Servicing Ratio (MSR), which you can calculate using our MSR calculator. By taking this into account, we can then find the estimated household monthly income needed to afford the flat.

What we noticed about the November 2022 Queenstown HDB BTO

Three BTO projects will be launched in different areas of Queenstown. This includes the Dover Forest / Ulu Pandan BTO. The site drew some controversy when plans for public housing was announced in December 2020.

Nevertheless, we think this is probably the most anticipated project in the November 2022 BTO launch. After all, here’s where you can get unblocked views of the landed housing estate at Holland just across the Ulu Pandan canal. It’s also probably a Prime Location Public Housing (PLH) project, given its proximity to the MRT and prime area.

It’s the same case for the Ghim Moh Close BTO, which is near Buona Vista MRT and close to the Holland area. In fact, it’s next to Ghim Moh Ascent BTO, which is a PLH project launched in the May 2022 BTO.

All three Queenstown BTO projects are generally within walking distance of the MRT. The Dover Forest BTO and Ghim Moh Close BTO are within a five-minute walk to their respective nearest MRT, which are Dover MRT and Buona Vista MRT.

Both Dover Forest BTO and Ghim Moh Close BTO are located close to each other. So they share the same range of food and retail options, from affordable to more atas options.

The nearest supermarkets of the Dover Forest BTO include NTUC Fairprice and Sheng Shiong Supermarket, at around a six-minute walk away.

The Star Vista and Ghim Moh Market and Food Centre are also around a 10-minute walk away from the BTO. A little further is Holland Village, at around a 20-minute walking distance.

Likewise, the Queensway BTO has a good range of food and retail options in the vicinity. For starters, Mei Ling Market and Food Centre is around an eight-minute walk.

More importantly for meatball lovers, IKEA is around a 12-minute walking distance. You can also find Anchorpoint, Queensway Shopping Centre and Alexandra Village Food Centre in the area.

The Dover Forest BTO and Ghim Moh Close BTO are especially ideal for small families with school-going kids. There are lots of schools located in the area, including:

On the other hand, there’s a lack of primary schools within 1km radius of the BTOs, with Dover Forest BTO only having Henry Park Primary within the radius.

The Queensway BTO is right across the street from Alexandra Hospital, which can be both a boon and a bane. The good thing is that those who require more medical attention will have an option to have easier access to healthcare facilities.

(And for those looking to earn some rental income, the flats here can serve the foreign healthcare workers working nearby.)

The bad thing is that residents here will have to contend with heavier traffic and higher noise levels.

In comparison, for the Dover Forest BTO and Ghim Moh Close BTO, hospitals are a little further, around an eight-minute drive to Alexandra Hospital and NUH.

At the same time, we note there’s a proposed health and medical centre next to the Dover Forest BTO, although there’s currently not much details on it.

Green spaces are aplenty in the vicinity, with the western part of the Dover Forest to be set aside for a nature park. This was after calls by the public and nature groups to have the area preserved, instead of having it deforested for housing.

We also notice the Rail Corridor stretches along the site of the Queensway BTO, where its nearest entrance is at Queen’s Close.

A little further (around a 20-minute stroll or an eight-minute bus ride from the Queensway BTO) is the Southern Ridges, where you can enter from Alexandra Arch. You can either head west to HortPark and Kent Ridge Park, or east to Telok Blangah Hill Park and Mount Faber.

Unlike the Dover Forest BTO and Ghim Moh Close BTO, the Queensway BTO is located closer to Bukit Merah. There are not many school options in the vicinity.

As with past launches in centrally located mature estates in the past few years, there are no 5-room flats available.

What’s more, since two of the Queenstown BTO are most likely PLH projects, the flats are likely to be smaller. For instance, a typical 4-room BTO flat is 93 sqm. On the other hand, 4-room PLH flats launched so far measure 89 sqm.

It’s also not ideal if you’re looking to expand the family, since you’ll have to wait 10 years before moving out to upgrade to a bigger home.

Given the central location and lack of BTO projects, Queenstown has always been one of the most popular areas in the resale market. 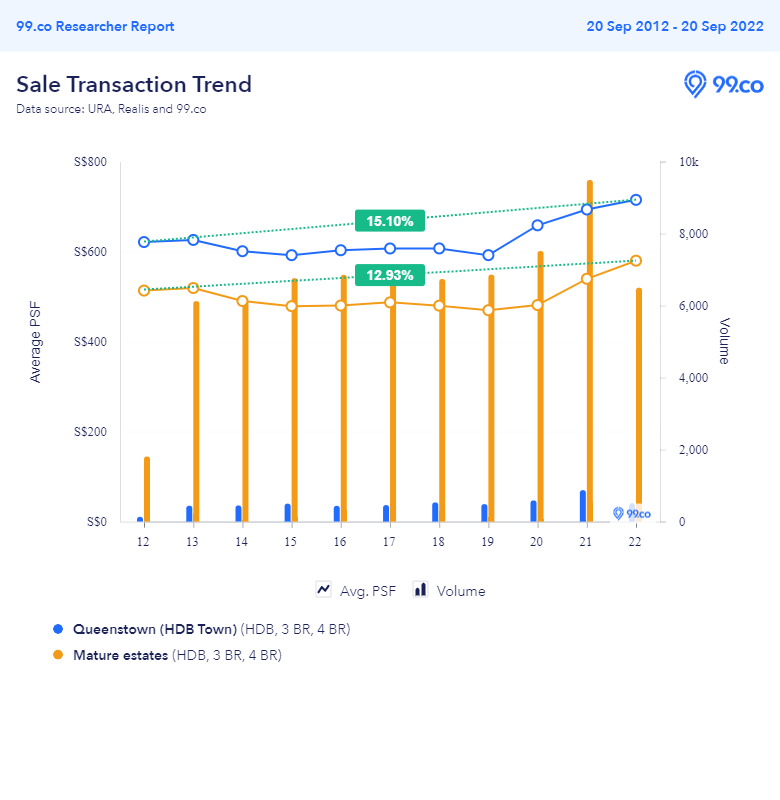 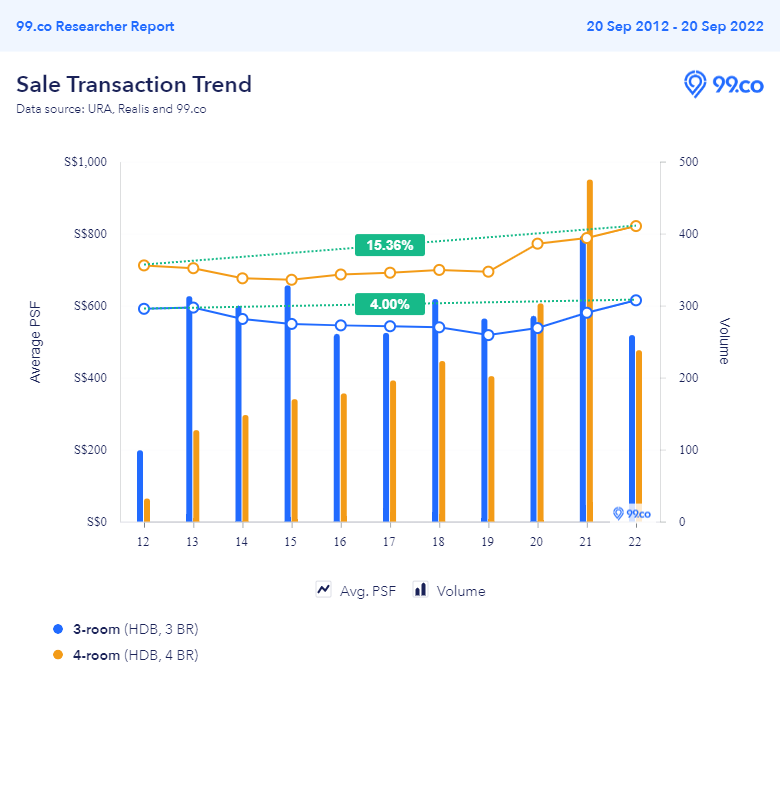 Here are the average prices and price psf of 3-room and 4-room resale flats in Queenstown, as of writing (20 September).

All three Queenstown BTO are good options if you want to live in a central location, with the CBD within eight stops.

If unblocked views are a must-have, go for the Dover Forest BTO. Given that Singapore is already densely built, there’s not a lot of places where you can get unblocked views, especially for public housing.

If you want convenient access to the hospital, consider going for the Queensway BTO.

But take note that the Dover Forest BTO and Ghim Moh Close BTO will most probably be PLH projects, which come with a 10-year Minimum Occupation Period (MOP).

Will you apply for the November 2022 Queenstown HDB BTO? Let us know in the comments section below.

If you found this article helpful, check out our overview of the November 2022 BTO projects and in-depth reviews: