Much has been said about Copen Grand – the first executive condominium in Tengah Town.

Less than a week after its sales gallery opened on October 7, the 639-unit project saw around 20,700 visitors throng its showroom, 2,300 e-applications from prospective buyers and by the end of its first day of launch on 22 October, about 465 units bought (a 73% sell-through).

All this comes despite prospective buyers facing tightened stress-test interest rates (EC buyers can only apply for bank housing loans) from the September 30 cooling measures.

In our showflat review, we shared the unit mix, where 56 of the 639 units are for its 5-bedroom Premium apartments – four of which are Penthouses.

We also shared that the indicative per-square-foot price range for the project was around S$1,189 to S$1,338, where the price of a 5-bedroom Premium apartment can start from S$1.88m and up.

The unit includes a strata void area of 15 square metres (161 sqft) above the living and dining area with a 4.5-metre floor-to-ceiling height. 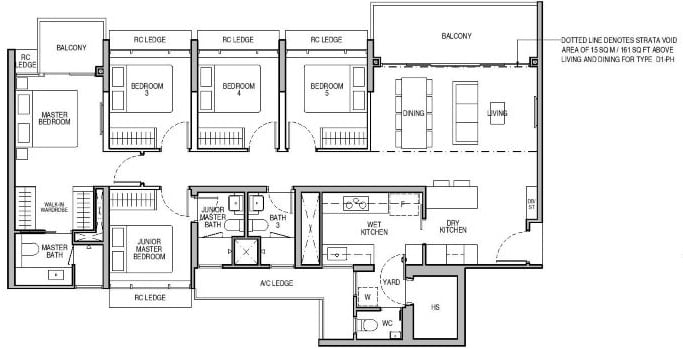 While that’s within the indicative psf price range, we should note that it is a record price for a new launch EC to date (for uncompleted projects). Since it is also within District 24, which is in the Tengah, Kranji and Lim Chu Kang area, it may be the current record-holder for the neighbourhood and District.

To get a sense of the range, here’s a chart to reflect where some of the top new launch EC sales for uncompleted projects are so far:

Note that with the exception of Bishan Loft, the only EC launched in the Rest of the Central Region (RCR), the rest, including New Launch ECs, are in the Outside of Central Region (OCR).

Here’s the chart for top resale ECs which have completed their 5-year MOPs and sold in the resale market.

Despite the eligibility restrictions, it shouldn’t surprise anyone that ECs remain popular among first-time homebuyers and HDB upgraders.

In a related article, we reported that 99.9% of all EC units sold in the resale market between 2007 and end-August had yielded an average gross profit of S$295,904 each. Most of these units were sold less than a decade after they were first bought.

As a hybrid public and private housing form, ECs can only be resold to Singaporeans and PRs after the 5-year MOP and to foreigners once they become privatised after 10 years.

The next upcoming EC will be Tenet at Tampines, which is expected to launch in November 2022. The post 1,679-sqft penthouse at Copen Grand sold for S$2.173m, a record for new launch ECs appeared first on .