We may still be in the holiday season (Merry Fa Cai everyone!), during which there’s a lull in property transactions. But that doesn’t stop us from seeing record-breaking HDB resale transactions.

(Writer’s note: these transactions may have been closed before the holiday period, but were only registered in HDB’s record recently. So it’s more likely that Christmas came early for these sellers!)

This Toh Yi Drive HDB maisonette has also taken over the previous record holder (which we reported in early December) to become the most expensive HDB executive resale flat in Singapore.

Spanning 1,615 sq ft, this HDB maisonette in Bukit Timah was sold for a price psf of around S$805.

It’s located within the 10th to 12th floor in Blk 2 Toh Yi Drive, just opposite the block where the previous record holder for the most expensive HDB executive resale flat is located.

The previous record holder is also an HDB maisonette, located at Blk 3 along the same road and was sold for S$1,290,800.

But in terms of price psf, this Blk 2 flat is not the record holder. That record still belongs to a 1,572 sq ft HDB maisonette at Blk 6 Toh Yi Drive, which was sold for S$814 psf earlier in September.

Similar to the Blk 3 maisonette, the lease of this current record holder started in 1988, which means it is 34 years old and has only around 64 years 9 months of remaining lease.

There’s also an upcoming mixed-use development The Reserve Residences at around an eight-minute walk away, where residents can expect retail spaces and a new bus interchange.

Another transaction that caught our eye is the S$1 million sale of an HDB maisonette at 287D Jurong East Street 21. This also means that it’s become the first resale flat in Jurong East to break the million-dollar mark and is now the most expensive HDB resale flat in the estate.

Located within the 7th to 9th floor, the executive HDB flat has a floor area of 1,561 sq ft. This translates to a price psf of around S$641 psf.

With its lease starting in 1998, it is around 24 years old and has around 74 years and 7 months of remaining lease.

Notably, the flat is located in one of the blocks that’s closest to the heart of Jurong East. For instance, Jurong East MRT, Westgate, JEM and IMM are all around a 10-minute walk away.

Jurong East is also set to be Singapore’s second CBD with the development of Jurong Lake District.

In general, the average prices of HDB executive flats in Bukit Timah and Jurong East have stayed above the national average over the past 15 years. 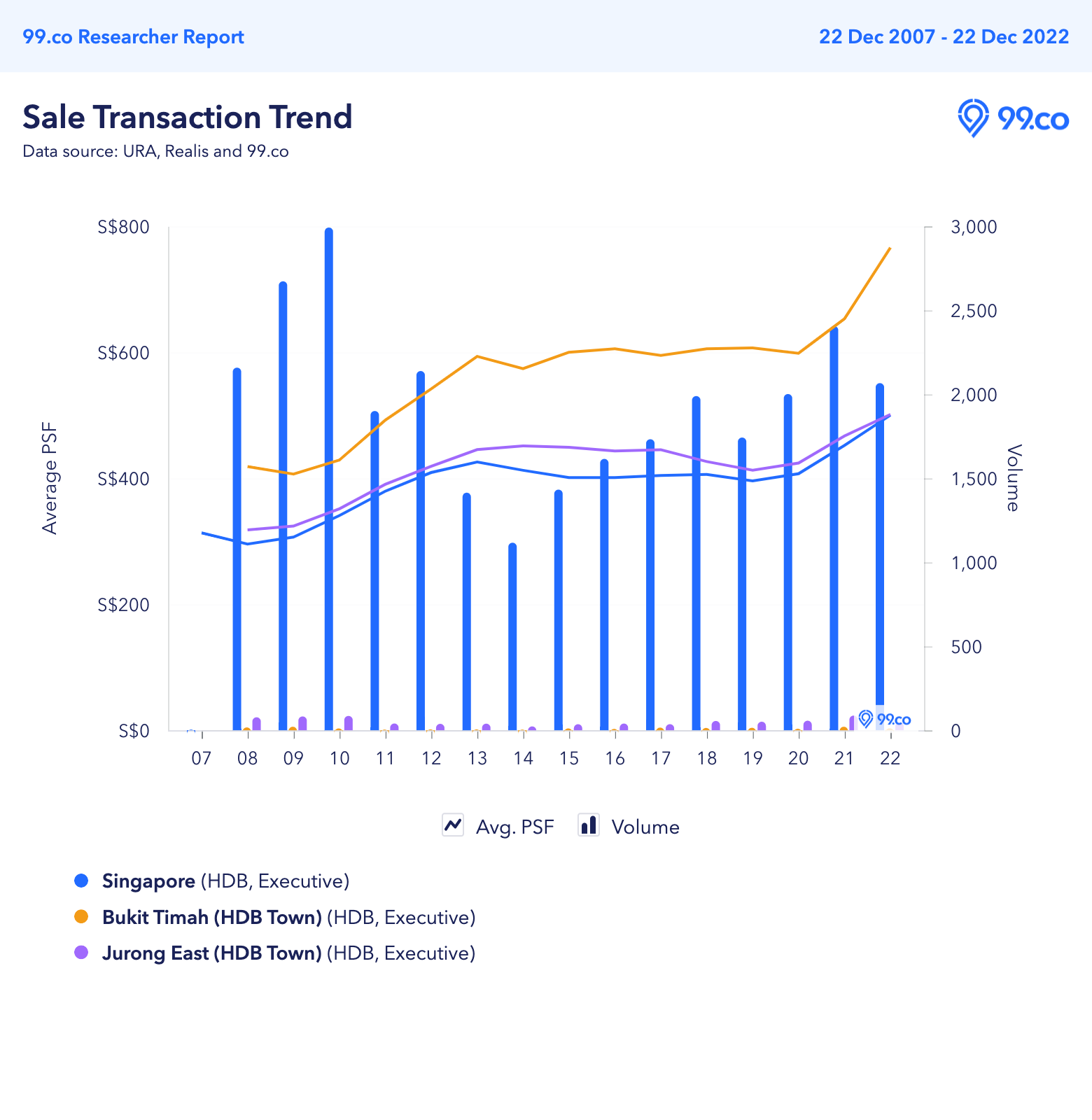 Of the 365 million-dollar HDB resale flats sold this year (as of 27 December), 75 are HDB maisonettes. While many of them come from centrally-located estates such as Bishan, Bukit Timah and Serangoon, a small number (nine, to be exact) come from the suburbs, such as Bukit Batok, Pasir Ris and Jurong East.

Unlike typical HDB flats, HDB maisonettes are double-storey flats. The common areas are usually on the first floor, while the bedrooms are on the second floor.

Given that HDB maisonettes are no longer built, they have become even more prized among potential buyers. Considering to sell your flat? Let us connect you with a property consultant.

8 Beautiful HDB Corridor Gardens in Singapore: How to Green Your Home