Is Smoking Allowed Inside And Outside Of HDB Flats?

New to Singapore and not sure where you can legally light up? This article covers everything you need to know
Read More

What is CCR, RCR and OCR? Where do these regions fit in the Singapore district map?

Singaporeans sure love acronyms, and the same goes for the real estate sector. Broadly, the Urban Redevelopment Authority (URA) has divided Singapore into three main regions, which the URA calls "market segments".

The boundaries of these regions are anything but clear cut, so here's a map that could help: 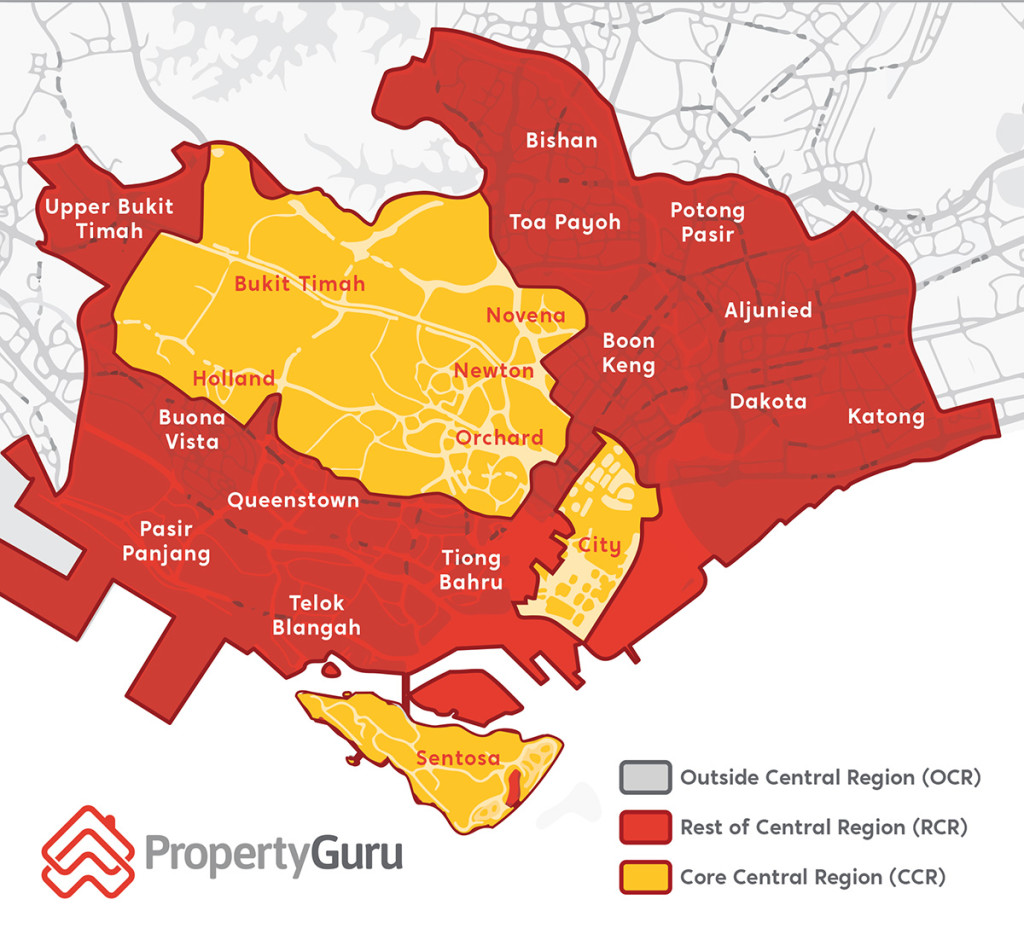 Want to know more? Here's the rundown of all three Singapore regions.

The Core Central Region, also known as the CCR, includes the traditional prime areas of Singapore (i.e. postal districts 9, 10 and 11), the Downtown Core (including parts of Bugis south of Ophir Road), as well as Sentosa.

This is where most high-end, luxury properties in Singapore can be found. Many of the private residential properties in the CCR are also freehold in tenure.

What's not part of the CCR: Outram, Clarke Quay, Chinatown, Bencoolen and anything north of Ophir Road

Our take on the CCR: Even though the CCR might be made up mostly of high-end properties, there can still be a few value finds.

Check out these properties available for sale in prime districts 9, 10 and 11 and you'll know what we're talking about!

Rest of Central Region (RCR): Central Areas That Are Not Part of CCR

The RCR is regarded as the intermediate, or mid-tier, region in terms of pricing, between the mass market condos in the OCR region and the high-value properties in the CCR. However, as our Property Market Outlook 2020 shows, the gap is closing between RCR and CCR properties, particularly in districts where urban development, renewal and infrastructure growth has taken place.

Our take on the RCR: The RCR benefits from the confluence of demand from various buyer groups, from investors to owner-occupiers, and from young families to empty nesters.

Outside Central Region (OCR): Everywhere Else in Singapore

The Outside Central Region (RCR) is about three-quarters the size of Singapore, and basically refers to areas where mass-market condos at the lower range of price points are located, including executive condominiums (ECs). You could say that these places are "suburbs", but this would give a false impression of remoteness.

Here's the thing: with excellent MRT connectivity around the island, the OCR is a very viable and affordable housing option even for those who work in the city, with resale condo prices as low as $800 per square foot (psf).

The government also has plans to bring high-value jobs to the OCR, in the form of Jurong Second CBD, Punggol Digital District and Woodlands Regional Centre.

Private residential projects in the OCR are also typically larger, with condos usually clocking in at 300 units or above, barring some boutique developments that are typically located among landed property enclaves.

Our take on the OCR: Given the stiff competition between projects across various OCR locations, developers are pulling out all the stops to lure buyers.

Attractive pricing is only one thing; given the larger size and higher unit counts of OCR projects, developers can afford to include show-stopping facilities, making the projects particularly appealing to young couples and millennial families.

According to recent transaction data from URA, the most popular OCR districts are 5, 17 and 19, thanks to a succession of newly launched condominiums in these areas.

More FAQs Around the Regions of Singapore

What is CCR, RCR and OCR?

What is CCR Property?

CCR property refers to properties in the Core Central Regions of 9, 10 and 11, the Downtown Core and Sentosa.

What Is Considered Central Singapore?

Does Singapore Have Districts?

Yes, there are 28 Singapore districts. You can search for properties on PropertyGuru with our District Search filter.