Singapore’s fifth MRT line, the Downtown Line (DTL), opened in December 2013, linking the eastern part of Singapore to the central and northwest regions.

To date, there are 34 Downtown Line (DTL) MRT stations stretching from Bukit Panjang in the northwest, to Expo in the east. In the coming years, however, there will be at least 4 more DTL MRT stops as there are several Downtown Line extensions in the works.

Read on to learn more about the four new DTL MRT stations that will be added to the roster.

Have a specific DTL MRT station you want to live near to? Search for properties nearby on PropertyGuru.

First operational in 2013, the Downtown Line links many estates in the East and North to the Central Business District (CBD) and central region. Places such as Tampines and Beauty World have a direct train line to CBD-friendly MRT stations such as Downtown and Newton. Citizens also can enjoy improved access to hotspots such as Chinatown, Little India, Rochor, and Bugis.

The conceptualisation for the three phases of the Downtown Line was first announced in 2001, and construction took place in 2008. The final envisioned plan was for the Downtown Line to have 36 MRT stations across 44km. Currently, only 34 stations are operational.

With the exception of Gali Batu Depot, all the train stations run underground. When the Downtown Line (DTL) is completed, it will become the longest, driverless MRT line in Singapore. However, those concerned about the safety of a driverless train need not worry. Driverless trains have already been in operation for years.

The table below displays the MRT stations that currently operate along the Downtown Line, as well as the year they went into operation.

DTL phase one began in 2013, and started with the launch of the main stations, well, downtown, like Bugis, Bayfront and Promenade. In phase two (2015), the northwest stations Hillview, Stevens and Rochor were rolled out. Finally in phase three (2017), the rest of the east and central stations MacPherson, Tampines West and Bendemeer were completed.

As mentioned, there will be four new DTL MRT stations to look forward to. Here’s a summary of the Downtown Line extensions and when we can expect them:

Turns out that Phase 3 of the DTL MRT construction was not exactly complete. An extension to Downtown Line Phase 3, known as Downtown Line 3e, will extend the present eastern arm of the Downtown Line from its current terminus at Expo MRT station.

There will be two new MRT stations in this eastern Downtown Line extension: DT36 Xilin and DT37 Sungei Bedok.

This phase of the Downtown Line extension is slated to be completed by 2024.

You may have noticed that there is no MRT station between DT3 Hillview and DT5 Beauty World. That’s because DT4, which will be named Hume Station, is actually a shell station with only structural provisions.

The station had remained ‘dormant’ because “developments in the area and ridership growth did not yet warrant the station opening,” according to this Straits Times article.

Fortunately for the 20,000 residents in this area, Hume Station will be refitted and be operational around 2025.

While not exactly a Downtown Line extension, the upcoming Hume MRT station is a noteworthy DTL MRT station as there are several prominent condominiums here, such as Hume Park I and Hume Park II, Parc Palais, The Hillside, and Hillview 128.

Currently, the DTL terminates at Bukit Panjang as its northwesternmost point. But this will change soon as there are plans to extend the Downtown Line to include Sungei Kadut, expected to be ready by the mid-2030s.

Although we do not know what station number Sungei Kadut will be – since Bukit Panjang is DT 1 – there is much reason to cheer for the upcoming Downtown Line extension to Sungei Kadut.

The upcoming Sungei Kadut DTL MRT station will be built between Kranji and Yew Tee MRT stations on the North-South Line (NSL), and thus connect the DTL to the NSL.

This means residents and workers in northeast Singapore can transfer more easily to the Downtown Line, which will take them to the city centre more quickly. Commuters can potentially save up to 30 minutes in travel time.

This Downtown Line extension is an important part of the LTA’s Land Transport Master Plan 2040, where the goal is to ensure most peak hour public transport journeys take 45 minutes or less.

A new MRT station isn’t all that’s in store for the industrial area of Sungei Kadut. The area is slated for a revamp in the next few decades and will be modernised as an environmental and agri-tech hub in the north.

The Downtown Line (DTL) has granted quick access to the CBD area, which has helped to reduce the burden on the existing North-South and East-West lines (NSL, EWL). This means that MRT stations will not be as crowded during peak hours. 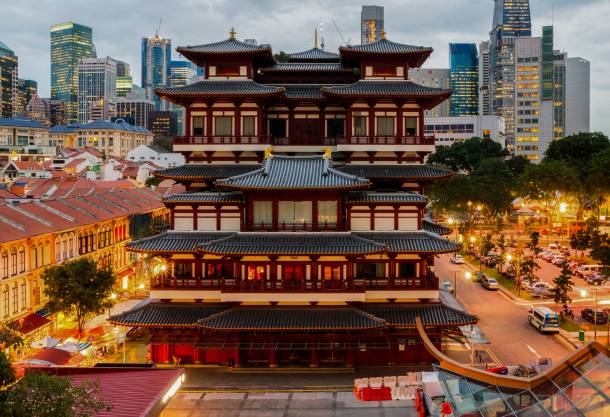 Chinatown has long been a common haunt for tourists and locals alike.

It is also easier for tourists and locals to access popular locations such as Little India, Chinatown, and Bugis. Prior to the existence of the Downtown Line, those who wanted to access these places had to stop elsewhere and take a bus.

With phase three of the Downtown Line, those living in the East also have alternate train routes apart from the East-West line.

Want to Live Along the Downtown Line in Singapore?

A study carried out along properties on the Circle Line found that properties located close to an MRT station see an uptick of up to 1.6% in value. This might be even more true for those located next to MRT stations along the Downtown Line, since it links to the CBD area.

Related article: HDB Flats near MRT Stations in Singapore: Exactly How Much More do they Cost? (2021)

There are a whopping 34 operational stations on the DTL, so it’s impossible to list all the properties within walking distance to a DTL MRT station. Thankfully, you can narrow down your search with PropertyGuru’s MRT filter. Here, have a look:

For extreme convenience, you may be looking to live right downtown, in the heart of the CBD. There are many new launch condos around the Newton MRT station to consider, like Kopar at Newton, Pullman Residences, The Hyde, and 10 Evelyn. 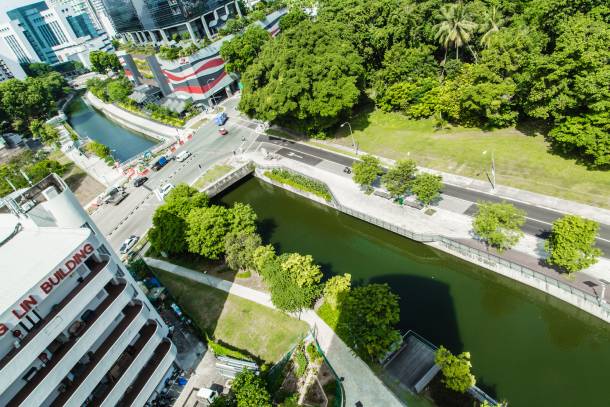 The calm Rochor river provides a sense of tranquillity to the neighbourhood.

Another central location along the Downtown Line is Rochor MRT station, located close to the bustling Bugis and Jalan Besar districts and a stone’s throw from Plaza Singapura. If you like the idea of living near the city, consider nearby properties like Haus on Handy, The M, and Midtown Modern. Or, try your luck with the upcoming Rochor BTO in the November 2021 HDB BTO launch (it’s a literal stone’s throw from a Jalan Besar MRT station exit).

If you find this area too expensive yet want a direct line to the CBD, you can consider looking around the ‘ends’ of the line, either in the northwest or eastern regions.

In the Bukit Panjang and Upper Bukit Timah, there are many condos like the newly launched Dairy Farm Residences, Phoenix Residences, and Midwood. And on the eastern arm of Downtown Line, popular new condos include Treasure at Tampines, The Navian, and Urban Treasures.

How Many MRT Stations Are There on the Downtown Line (DTL)?

Is the Downtown Line (DTL) Completed?

What Are the Upcoming Downtown Line (DTL) MRT Stations?

Should I Live Near the Downtown Line (DTL)?

Are you looking for a new home? Head to PropertyGuru to browse the top properties for sale in Singapore.

Cairnhill 16 to open for preview on Saturday