This comes about a year after he settled a dispute with her husband, Mr Ong Tze Boon, who is his 53-year-old younger brother, over shareholdings in the company that controls the architecture business founded by their parents.

For this particular case, the two-storey bungalow used to be the private residence of the late Mr Ong Teng Cheong. The former president passed away in 2002 at the age of 66, while his late wife, Madam Ling Siew May, passed away in 1999.

The property now lists Mr Ong Tze Guan and Madam Wang as tenants in common with equal shares each.

According to The Straits Times, the court order is to get Wang to buy over Ong’s share of the bungalow based on the current market valuation, or to sell the property in the open market and have the sales proceeds divided equally between them.

If the property is sold in the open market, the proceeds are to be applied to fees, stamp duties and related expenses to the sale. There is no indication for whom Wang is holding the share of the property in trust.

The bungalow was originally designed by Frank Wilmin Brewer (1886-1971), a British architect who was the first university-trained architect to practice in Singapore. After his arrival in Singapore in 1920, he introduced a late Arts and Craft Movement style to the Singapore house.

It was during this period when he built the Dalvey Estate house in 1927. Brewer was also behind the Art Deco styles in the Singapore Swimming Club’s clubhouse (1936) and the original Cathay Cinema (1939).

The Dalvey Estate bungalow is one of 14 conserved buildings in the Nassim Road and White House Park Conservation Area. In the mid-1990s, it was restored and extended by ex-President Ong’s architectural practice.

Not only that, the bungalow was also one of the winners of the URA’s 2001 Architectural Heritage Awards, together with a 2-storey Victorian-styled bungalow at Nassim Road and a 3-storey terrace house at Emerald Hill.

A check of landed property transactions in the Nassim neighbourhood shows that average psf prices have risen 68.93% over the past decade to S$2,715. 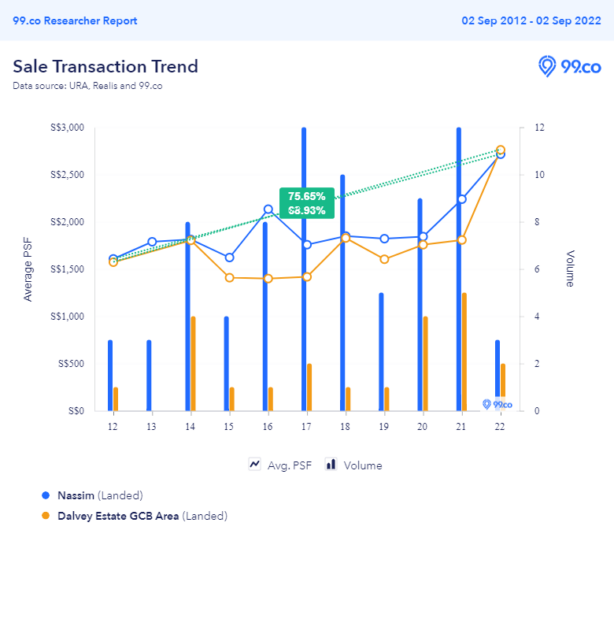 Last year alone, two Dalvey Estate land parcels near the former president’s home were sold. The most recent one – a 20,048-sqft property just several land plots away – was sold for S$50m or S$2,494 psf in May 2021.

Properties for sale in the Nassim neighbourhood Have you ever visited any homes in the Dalvey Estate GCB Area? Let us know in the comments section below.