What impact do the units for sale at Sim Lim Square have on nightlife in Singapore?

Mention Sim Lim Square, and for some, it’ll conjure up images of shady salespeople trying to rip off unsuspecting customers (who are less tech-savvy) trying to purchase electronic goods.

The notorious mall made international headlines in 2016 for scamming customers by making them pay through the nose for warranties that cost more than double what they paid for the actual products.

All right, not all shops there are shady, but you get the point.

What’s interesting, though, is that not many people are aware that the complex also houses nightlife entertainment in the form of KTV bars. These bars also made the news this year in February, when ten women were arrested for flouting safe management measures during the height of the pandemic.

Now just seven months later, seven units at the electronics and IT mall have been put up for sale for S$17 million via private treaty.

The units make up an estimated strata floor area of 5,156 sqft. They come with Class 1 entertainment licenses, which allow operating hours up to 3 am. There’s a balance master tenancy of more than five years, with an estimated rental yield is around 4%.

As the units are zoned for commercial use under the Urban Redevelopment Authority (URA) Master Plan, there’s no seller’s stamp duty (SSD) or additional buyer’s stamp duty (ABSD) payable. Potential buyers (including foreign buyers) can choose to acquire all seven units or individual units.

According to Huttons Asia, operators keen on running a nightlife business will be pleased to know that the units have their public entertainment licenses in place, as well as various enhancements such as private 24-hour air conditioning, ventilation and exhaust systems and high power infrastructure.

Completed in 1987, Sim Lim Square boasts six storeys and 492 units, most of which house electronics and IT retailers. 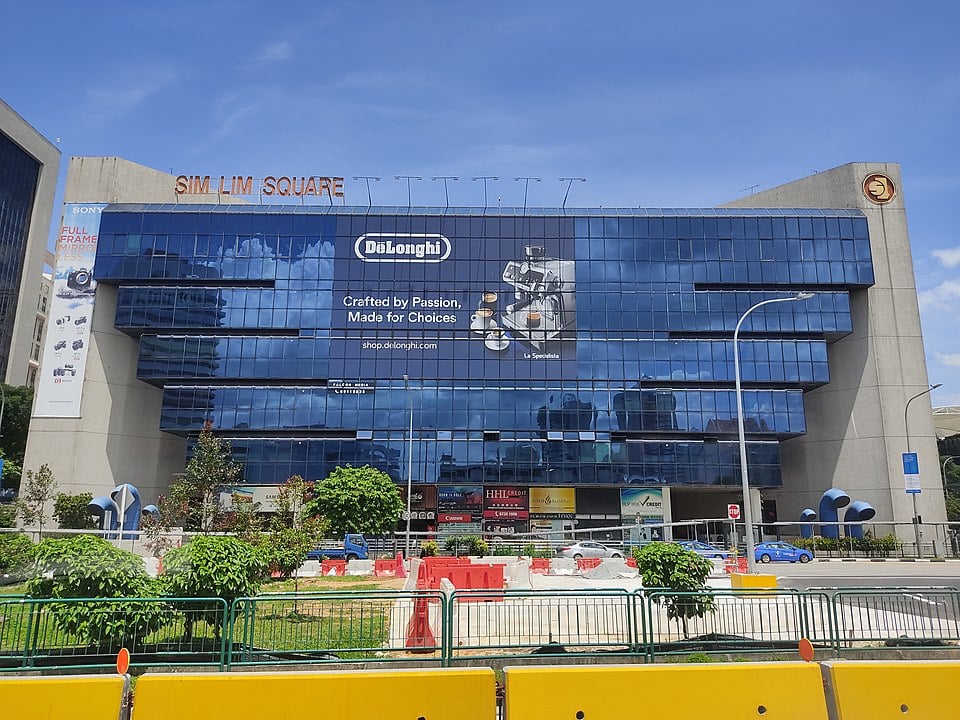 Located along Bencoolen Street and Prinsep Street, the mall is highly accessible, with Rochor MRT station being just a 2-minute walk away. Jalan Besar MRT, Little India MRT and Bugis MRT are also within a 10-minute walk.

For those who do not frequent the mall, or are afraid to get fleeced if they’re less tech-savvy, there are some tendencies to compare the complex with similar buildings such as Peace Centre, Golden Mile and Orchard Towers.

In December 2021, Peace Centre and Peace Mansion were sold to Chip Eng Sen for S$650 million.

Peace Centre has been anything but peaceful – it houses an array of Chinese KTV lounges, with many of the hostesses living next door at Peace Mansion. Many residents have made noise complaints and even moved out due to the women causing a ruckus on many a late night after work.

The KTV lounges were forced to close indefinitely after multiple safety measures breaches, resulting in a massive COVID-19 cluster case.

Golden Mile was also successfully sold for S$700 million in May 2022 after 80% consent from its owners was achieved in record time, officially marking the end of siam dius (Thai-themed nightclubs) in the establishment.

Orchard Towers also went up for collective sale in February for a whopping S$1.6 billion. The freehold building also has a similar seedy reputation, with many nightclubs, bars and sex shops disguised as beauty and massage salons occupying the commercial block.

In August, it was reported that the Public Entertainment License for its operators would not be renewed, citing law and order issues and complaints from the nearby residents and developments. The official order came as a surprise to many landlords and operators, who had freshly renewed leases in hopes of the reopening of Singapore’s nightlife scene bringing in more business.

How will this affect Sim Lim Square?

Well, this can swing either one of two ways:

Prospective buyers of the seven units might shun Sim Lim Square for two reasons: Firstly, the mall isn’t a known destination as a nightlife spot, so it probably wouldn’t be able to pull the same crowd compared to Peace Centre, Golden Mile and Orchard Towers.

Secondly, the complex already harbours notoriety as a “scam centre” of sorts, which may give pause to those wanting to take up business residence there.

On the flip side, the seven units might serve to fill the gap left behind by the en blocs of Peace Centre and Golden Mile, as well as the eventual demise of Orchard Towers’ famous (infamous?) nightlife entertainment.

After a two-year hiatus for Singapore’s nightlife, the ban was lifted in April for all nightlife establishments, including bars, pubs, karaoke joints and discotheques. The policies of a 10.30 pm cut-off sales for alcohol and the wearing of masks indoors have also been lifted, heralding a slow and steady recovery for the industry.

Do you think the nightlife units at Sim Lim Square will be snapped up by operators? Let us know in the comments section below.

If you found this article helpful, check out Why the most expensive en bloc sale may not go through and Will Golden Mile Complex be next after the Peace Centre / Peace Mansion en bloc?

The post What impact do the units for sale at Sim Lim Square have on nightlife in Singapore? appeared first on .