Around 5% of the flats to be launched in the November 2022 HDB BTO sales exercise will be located in Kallang/ Whampoa. With only around 470 units available, this is the smallest project in this launch.

HDB hasn’t released the price range yet. So for now, you can refer to SRX’s estimations based on nearby resale transactions and launch prices from recent BTO launches.

Source: SRX. These estimations have been adjusted for differences in property age and location. If a launch is nearer to an MRT or commercial development, it’s likely to be more expensive.

Based on these pricing forecasts, we can estimate the downpayment, monthly instalments and household income needed to pay for the November 2022 Kallang/ Whampoa BTO flat. These estimates are based on the following assumptions:

To illustrate, we’ll use the median of the price range and won’t be taking into account any CPF grants or savings to be used. We’ll also be using a mortgage calculator to do the math.

And for public housing, you can only use up to 30% of your monthly household income to service the home loan. This is called the Mortgage Servicing Ratio (MSR), which you can calculate using our MSR calculator. By taking this into account, we can then find the estimated household monthly income needed to afford the flat.

What we noticed about the November 2022 Kallang/ Whampoa HDB BTO

The first thing about this Kallang/ Whampoa BTO that caught our eye is that it’s right beside Kallang MRT.

And right now, Lorong 1 Geylang Bus Terminal is just across the street. On the other hand, this bus terminal may be integrated with the BTO in future. According to the BTO map, there’s a proposed bus interchange on the BTO site.

Given the proximity to the MRT station and future plans for a bus interchange to be built on its site, this Kallang/ Whampoa BTO is very likely to be a Prime Location Public Housing (PLH) project.

The BTO is also located along Kallang River, so here’s your chance to live next to the river.

As mentioned earlier, Kallang MRT is right in front of the BTO. So residents will pretty much have direct access to the MRT. It’s similar to living in an integrated development, but at a more affordable price because of the subsidies.

This Kallang/ Whampoa BTO is also ideal for those working in the CBD and Paya Lebar area. Via the East-West Line, it’s three stops to City Hall MRT and four stops to Raffles Place MRT, and two stops towards the east to Paya Lebar MRT.

There are a few MRT stations in the vicinity as well, such as Geylang Bahru MRT and Bendemeer MRT on the Downtown Line, Boon Keng MRT on the North-East Line, and Stadium MRT on the Circle Line.

On top of that, there’s Lorong 1 Geylang Bus Terminal across the street, which we think will be replaced with the proposed bus interchange located on the BTO site. (As of writing, we don’t have any details about it. But if the plan goes through, the bus interchange can be built together with the BTO, or after the BTO is completed. If it’s the latter, residents will have to contend with the construction noise.)

So this BTO is perfect for those who rely on public transport. You’ll have convenient access to various bus routes and MRT lines here.

For drivers, there’s the Kallang-Paya Lebar Expressway (KPE) and Pan Island Expressway a couple of streets away.

This Kallang/ Whampoa BTO is located along Sims Avenue and is just a street away from Geylang Road, so you won’t run out of food options here.

Aside from that, if you want cheaper hawker fares, there’s Upper Boon Keng Market and Food Centre around a five-minute walk away.

Other than that, the nearest malls will be Kallang Wave Mall and Leisure Park Kallang at Sports Hub which are around a 15-minute bus ride, or around a 20-minute walk away.

This BTO is also just two stops to Bugis, where you have more retail options at Bugis Junction and Bugis+, as well as upcoming integrated developments such as Guoco Midtown.

Another thing that stands out about this BTO is the number of public sports facilities in the vicinity. For instance, there’s Sports Hub just around a 20-minute walk. Besides the National Stadium and Singapore Indoor Stadium, you can find an indoor sports hall, a swimming complex, volleyball courts and a skate park here.

Besides Sports Hub, you can also head to Jalan Besar Stadium and Swimming Complex or Kallang Basin Swimming Complex. Both are around a 15-minute bus ride away from the BTO.

There are very few schools in the area. This includes:

We also want to point out that there are no primary schools within the 1km radius of the BTO. So you have to go further towards the 1km to 2km radius, where you can find two primary schools: Bendemeer Primary and Kong Hwa School.

Since living within the 1km radius gives you priority for the ballot in the Primary One Registration, we don’t recommend applying for a unit here if you have young kids starting primary school.

Kallang Riverside Park is around an eight-minute walk from the BTO, where you can take a stroll along both sides of the river.

But other than this park, there’s not many parks in the vicinity.

Like the November 2022 Queenstown BTO, 5-room flats won’t be offered here. It’s the same as the previous launches in central locations in the past few years.

And should this Kallang/ Whampoa BTO be a PLH project, the flats here will also be smaller. In the PLH projects launched so far, 4-room flats measure 89 sqm instead of the typical 93 sqm.

In particular, there’s a steep increase in resale prices for the past two years, at 38.75% in the estate. 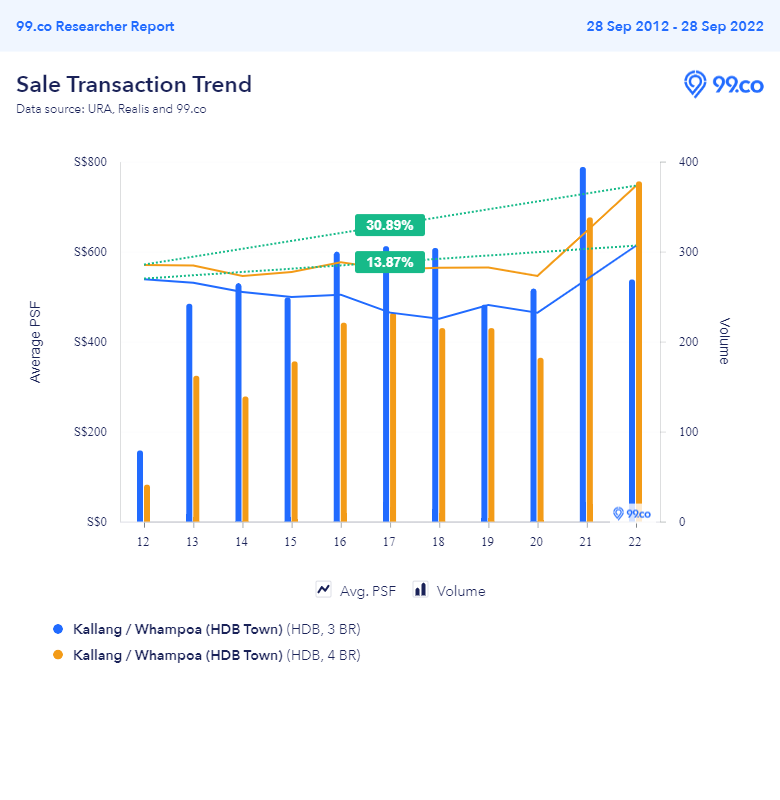 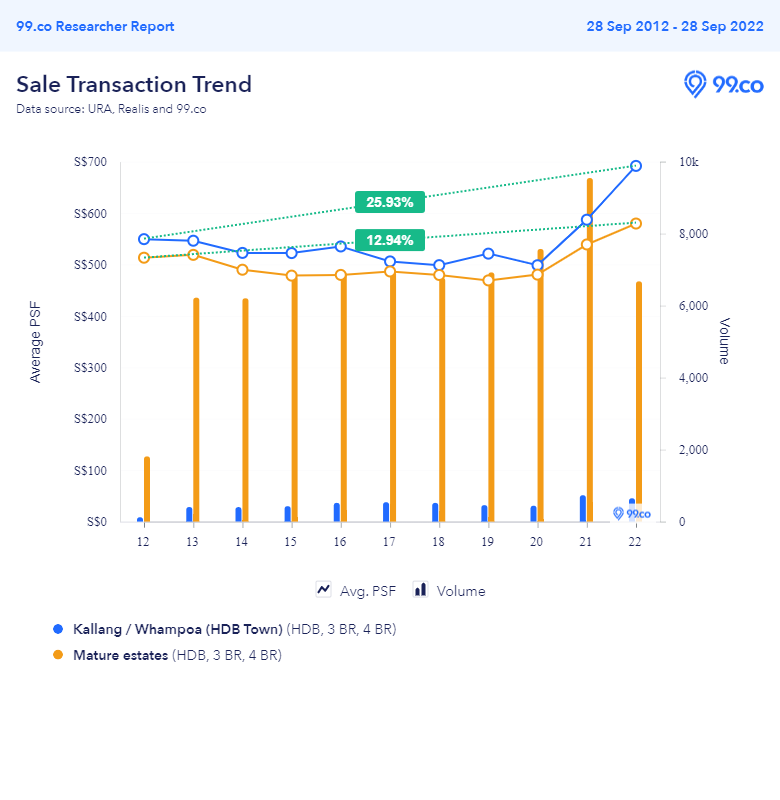 Here are the average prices and price psf of 3-room and 4-room resale flats in Kallang/ Whampoa as of writing (28 September).

You can also expect some uplift (and price increase) in the area in future.

Across the Kallang River, there’s the Kampong Bugis site that URA envisions will be a car-lite residential area with public spaces and lush greenery. This should bring some rejuvenation into the area.

You should apply for the Kallang/ Whampoa BTO if you prioritise being close to the MRT. This is, after all, one of the few BTO projects where you can have direct MRT access.

On top of that, it’s also very near to other MRT lines, which makes travelling to other parts of Singapore even more convenient.

At the same time, there’s a high chance that this BTO will be a PLH project, which comes with a 10-year Minimum Occupation Period (MOP) and a subsidy clawback. If you plan to sell it in future, there’s a limited pool of resale buyers since they need to meet the current BTO eligibility requirements, such as the S$14,000 income ceiling.

Also, keep in mind that this is the smallest BTO project in the November 2022 BTO launch, with only around 470 units up for grabs. So expect stiff competition here.

Will you apply for the November 2022 Kallang/ Whampoa HDB BTO? Let us know in the comments section below.

If you found this article helpful, check out our overview of the November 2022 BTO projects and in-depth reviews: