With two new Lentor sites launched under GLS, we review Lentor’s developments in relation to nearby primary schools

For Lentor Gardens, the tender is open until noon 4 April 2023.

Like Lentor Modern (which had a successful launch several weeks back), the upcoming Lentor Hills Residences and the two recently awarded sites at Lentor Hills Road (Parcel B) and Lentor Central, the release of the 5th and 6th additional sites is a definite signal that the estate is primed to become a coveted residential area.

Among the developments, Lentor Modern will be integrated with the Lentor MRT station on the Thomson-East Coast line network.

Here’s a summary table of the two GLS sites.

The location of these two sites relative to the other four existing Lentor sites (launched, in development) is what we’ll be analysing, particularly in relation to primary schools.

If you recall, in October 2021, when we covered the new home-school distance rules, one of the popular schools we featured was the all-girls CHIJ St. Nicholas Girls’ Primary.

At the time, we looked at developments within 1km and 2km of that primary school’s new home-school distance zones.

In summary, the closer your home is to a particular primary school (differentiated by zones), the higher the priority you get in having your child admitted if it comes down to a ballot.

Anyway, when that article was published, the Lentor Hills Road – Parcel A tender was ongoing, and Parcel B was on the Reserve List.

Parcel A was eventually awarded to Intrepid Investments, Guocoland and TID Residential, leading to the planned launch development of Lentor Hills Residences.

Some months later, Parcel B was launched for tender, and the 10,819 sqm site was awarded to TID Residential for S$276m.

Lentor Central (opposite Lentor Modern) was also launched for tender, and the 13,444.3 sqm site was awarded to Forsea Residence, Soilbuild Group and UED Alpha for S$481m.

Fast forward to today’s upcoming tender, and we have the following:

The map above is an overlay of URA’s six Lentor land parcels and OneMap’s 1km and 2km home-school distance boundary from CHIJ St. Nicholas Girls’ Primary.

Based on the overlay above, it looks like the upcoming Lentor Gardens tender site (pinned orange site) will be within 1km of the primary school.

If you intend to purchase a property in any of these developments at launch and you have plans to send your daughter to CHIJ St. Nicholas Girls’ Primary (with the prospects that you’ll need to ballot in Phase 2C), it might be beneficial to review which blocks fulfil your criteria.

Better yet, if the postal code is available and OneMap recognises it, you can verify if they fall within the 1km or 2km zone. This usually applies more to completed developments rather than those under construction.

For residents considering primary school admission of their children into Anderson Primary co-ed school, located to the east of the estate, the overlaid map below shows where the school’s 1km (red) and 2km (blue) zones are.

Based on the map, it looks like most of the land parcels within Lentor Hills Estate are within Anderson Primary’s 1km zone, with the exception of parts of Lentor Central to the north, which is currently on the Reserve List of the GLS programme. 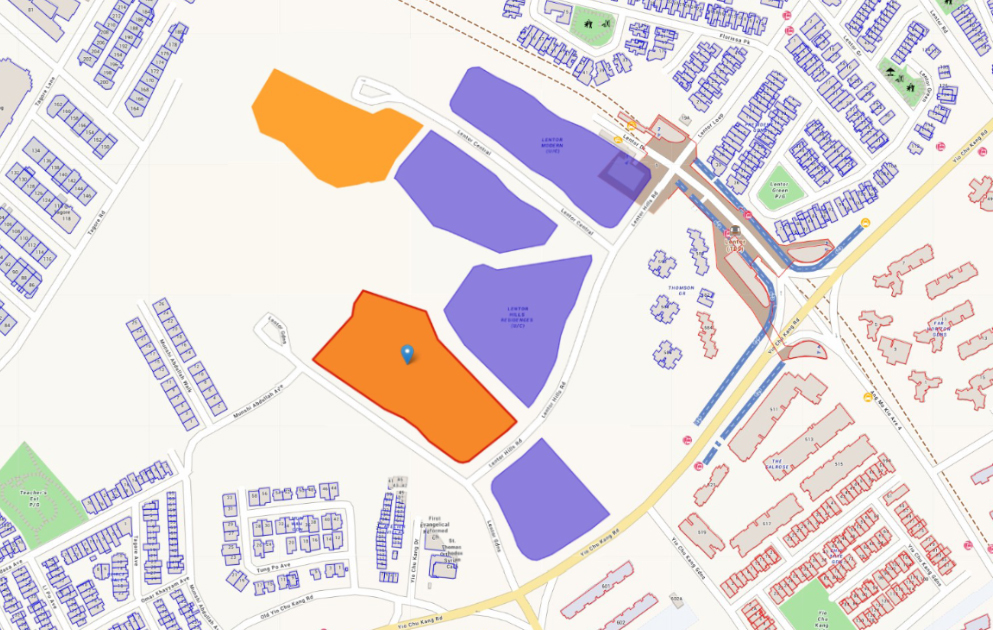 There may still be a small chance that part of Lentor Hills – Parcel B (the development awarded to TID Residential) is within the 1km zone of Mayflower Primary school.

Still, under this circumstance, it is always better to select a unit closer to the zone’s epicentre if you’re someone who can’t take any chances. The alternative is naturally to pick a different school.

The rest of Lentor Hills Estate will fall under the Mayflower Primary School’s 2km zone.

Of course, the above analysis is more for young parents planning to purchase a property in Lentor Hills Estate and eye admission into specific primary schools (and considering their ballot chances) in the neighbourhood.

As most of the developments at Lentor Hills Estate are completed by then, expect fierce competition for primary school admissions among residents in the neighbourhood.

If proximity to primary schools is not a concern for you and your family, it doesn’t really matter. Or does it?

It is always prudent to know which zone your property’s block (postal code) falls under relative to a popular school if you have plans to resell your apartment in the future. This is because your prospective buyer may be a young family with plans to send their child to a nearby school.

Also, there are many other secondary and tertiary institutions in the vicinity – such as Nanyang Polytechnic, Presbyterian High School, Yio Chu Kang Secondary and many more.

Keep a lookout for new launches in the Lentor Hills Estate, and here’s hoping you choose the right apartment in a favourable block when the time comes. Looking to buy a property in Lentor Hills Estate? Let us know in the comments section below.

If you found this article helpful, 99.co recommends 3 bids for Lentor Central, 2 for Lentor Hills Road (Parcel B) and 4 for Bukit Batok West Avenue 5 (EC) GLS sites and Home-school distance new rule: why we’ll see greater competition in some neighbourhoods.

The post With two new Lentor sites launched under GLS, we review Lentor’s developments in relation to nearby primary schools appeared first on .