The iconic Pinnacle @ Duxton has led to an uptick in million dollar flats sold per quarter.

As we see recurring headlines of sky-high resale HDB transactions, should Singaporeans worry that such prices are becoming mainstream? We take a look in this issue of the Guru View.

As we were doing the research for this article, two resale HDB flats, one in Boon Keng and the other in Clementi, sold for record prices. The Clementi unit, part of a HDB mixed-use development above Clementi Mall, sold for just over $1 million. The Boon Keng unit sold for $1.1 million, the current record for a 5-room HDB flat. These prices run counter to the argument that only rare, city centre flats like Pinnacle @ Duxton can command such prices.

These headlines make the news because the numbers are simply mind-boggling. An asset, one’s home, that is ostensibly a state-subsidised home, likely bought with grants, has made these homeowners overnight millionaires. Furthermore, Clementi is part of the suburban heartlands, eight MRT stops away from the city centre and Tanjong Pagar where the Pinnacle is located, if one wanted to be pedantic about it.

Perhaps one of the reasons why these headlines cause so much furor is that these are supposed to be affordable public housing, and most Singaporean families would be hard-pressed to muster even half of a million dollars for their home purchases. The situation begins to beg the question: “Is even public housing becoming unaffordable?”

Many commenters on PropertyGuru’s social media channels have said when such stories appear, that it is a case of “willing seller, willing buyer”. A seller decides that the property they want to put on the market is worth this price and a buyer is willing and able to meet that price.

Let’s therefore take a look at the numbers, and see how the situation bears out.

We’ll use $900,000 as the benchmark for sky-high prices, rather than $1,000,000. This is because we understand that many sellers would set prices at the “magic” price of $1,000,000, but are often negotiated down. This is especially so in a market where the government has implemented the Mortgage Servicing Ratio (MSR) of 30 percent of the borrowers’ gross monthly salary, regardless of whether the loan was taken from the HDB, or banks and financial institutions.

Figure 1 shows the number of resale flats per quarter since 2012, split by flat type. Interestingly, prior to 2015, volumes of resale flats exchanging hands for more than $900,000 were less. Most of these were executive flats (including executive maisonettes) or 5-room units, with a large bulk from the city fringe estates of Queenstown and Bishan. 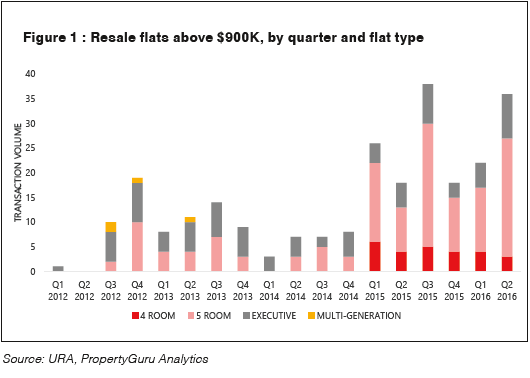 After 2015, these numbers climbed sharply, with Q1 2015 seeing a whopping 760 percent increase from the same period in Q1 2014. This was due to units at the landmark Pinnacle @ Duxton completing their Minimum Occupation Period (MOP), and homeowners with an eye to profit going to market with extremely high prices.

From 2015 onwards, we also began to see 4-room resale flats begin to transact in this price bracket, a first for this property class, due to Pinnacle units placed on the market at these prices.

Looking at the first six months of this year, some towns outside of the city centre are starting to see units being sold above the $900,000 mark. Figure 3 shows the percentage split of HDB estates with flats above $900,000 in the first two quarters of 2016. 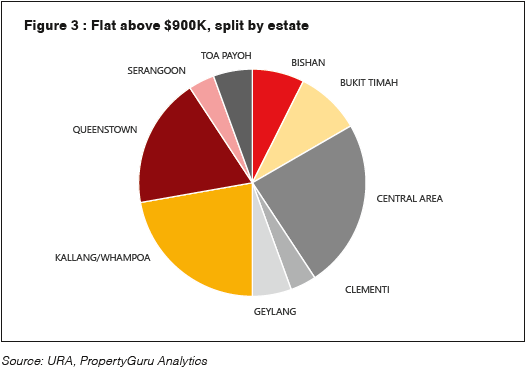 Kallang Whampoa is already seeing median prices above half a million for resale flats.  However, with the Design Build and Sell Scheme (DBSS) flats such as City View at Boon Keng completing their MOP, homeowners are putting their units on the market, asking for prices that exceed even a million dollars.

At time of writing, there were about 48 listings on PropertyGuru for this DBSS project, with asking prices starting at around $840,000 for a 4-room flat. Furthermore, with news of a 5-room flat on a high floor at the project commanding the highest price on record for a HDB flat at $1,100,000, homeowners are likely to ask for increasingly higher prices.

Market watchers have suggested that City View’s price premium might be justified by the project’s proximity to the city, coupled with the conveniences and amenities of a suburban estate as well as proximity to Boon Keng’s MRT station. Furthermore, the project also has views of the National Day fireworks and even Marina Bay Sands.

PropertyGuru also understands that several of the buyers of such expensive flats tend to be older, and moving from private property to HDBs. By cashing out of their private properties, these buyers have the wherewithal to purchase these flats at locations that they like, perhaps in order to be closer to their married offspring and grandchildren.

As an estate, Boon Keng’s prices, while surprising, might not necessarily come out of the blue. After all, the pros of the location are tangible and arguably worth the premium. In contrast, Clementi, a much further estate to the west of Singapore, has also seen resale prices above $900,000.

In June, a unit at Casa Clementi along Clementi Avenue 1 sold for $960,000. More recently in August, another unit at the same project sold for $916,000. Casa Clementi, which consists of over 2,200 units, has won awards for its unique concept, an elevated sky park above the multi-storey carpark that connects all the blocks in the estate. However, the project is further from Clementi MRT station.

While the number of flats selling at startling prices has indeed climbed, this might not be as alarming as you think. Figure 2 shows the percentage of flats that exceed $900,000 being sold in a year. While the numbers are showing a marked increase year-on-year, home buyers can take comfort from the fact that these numbers are still below one percent of all flats transacted in a single year. 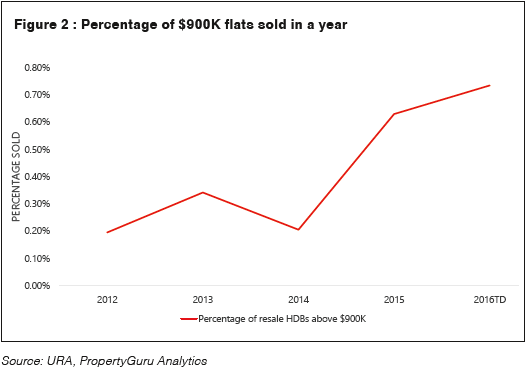 Even if these expensive resale flats are the statistical outliers in the overall scheme of things, does this warrant the government stepping in to curb the prices of these flats?

To answer this, it might be necessary to look back at why the government scrapped Cash-Over-Valuation (COV). In 2014, to prevent a series of escalating prices, the state removed COV figures from negotiations. This allowed buyers and sellers to agree upon a selling price, before going to the HDB to seek a valuation. To help buyers and sellers better determine prices, the HDB began to publish resale prices daily, so that negotiations are based on actual transacted values.

However, we can see today that this policy did not cause a shift in the behaviour of flat sellers, i.e., wanting to sell for above what the last person did. Hence, while these measures did prevent escalating COV prices, especially in a lukewarm market, this did not stop sellers from asking for prices higher than the last published transaction prices.

While a knee-jerk reaction might be to cease the publication of prices, we think that complicating or decreasing transparency cannot be the way to go. However, what is needed is more than the simple publication of transaction prices, which allows sellers to immediately focus on the outliers, the highest amounts, and use that as the starting price for negotiations.

Instead, what the system needs is for buyers and sellers to negotiate based on overall trends. Many third-party websites, including PropertyGuru, publish the price trends for property transactions based on the district and property type. By negotiating using aggregate data, buyers and sellers are better placed to come to a fair price that reflects market conditions, rather a simplistic one-upmanship over the previous high price. 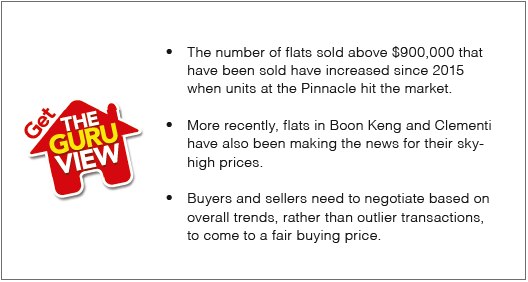