Bidadari, once known for its cemetery grounds is in the process of being transformed into a new HDB town. It is expected to be fully completed by the end of this decade around 2019 or 2020.

Since the first batch of 2,139 built-to-order (BTO) flats were launched in November 2015, the response was well received with over 259 applicants vying for 151 five-room HDB flats, and 399 applications for the 1,229 four-room flats on the first day of the sales launch in that year.

Since the launch for the first batch of HDB flats in Bidadari, the subsequent sales launch in November 2016 has also attracted many potential buyers, including those who missed out on the first launch held in the previous year.

As many would say, the value of a home depends on its location. Bidadari, by being in a central location within the larger Toa Payoh HDB town, is situated close to the city centre.

It is also close to the Potong Pasir and Woodleigh MRT stations on the North-East line (NEL).

The locational attributes, along with the government’s push toward a car-lite society will benefit many future residents of the town. According to the 2014 Urban Redevelopment Authority (URA) Masterplan, the Bidadari estate will be designed with a garden-like setting where a 10-ha Bidadari Park will be built in the estate to promote green, community spaces. There are also plans to convert part of Upper Aljunied Road (from Upper Serangoon Road to Vernon Park) into a heritage walk for pedestrians.

As for development of amenities near Bidadari, the government plans to make Bidadari estate into a cycling and pedestrian-friendly town. The estate will also be equipped with a new commercial development next to Woodleigh MRT station, a bus interchange, a neighborhood police centre and other community facilities located nearby. The estate will also have various places of worship, health, and medical facilities located within reach of each other to cater to the residents’ needs.

As of 8am on the final day of the HDB Built-to-Order (BTO) launch exercise on May 24 2017, out of the 143 three-room flats offered, there were 138 applicants with the application rate from the first-timers and second-timers standing at 0.5 times and 9.9 times respectively. Overall, the application rate for 3-room flats in the Bidadari Woodleigh Hillside development is 1.0 times.

Finally, for the 5-room, and 3 Gen flats, out of the 374 units, including 48 Three-Gen flats offered, there were 1,662 applications received. The application rate for first-timers and second timers is 3.1 times, and 31.5 times respectively. Overall, the application rate for 5-room and 3rd Generation flats in Bidadari’s Woodleigh Hillside is 4.4 times.

A table showing the application rates, and number of flat units offered at Bidadari Woodleigh Hillside HDB development is as follows:

Moving on to the pricing information shown above and the median price of resale flats calculated from Q2 2007 till Q4 2017 for the whole Toa Payoh HDB town, except for 3-room flat prices, the new BTO flats in Bidadari are competitively priced.

Moving on to the pricing information shown above and the median price of resale flats calculated from Q2 2007 till Q4 2017 for the whole Toa Payoh HDB town, except for 3-room flat prices, the new BTO flats in Bidadari are competitively priced. 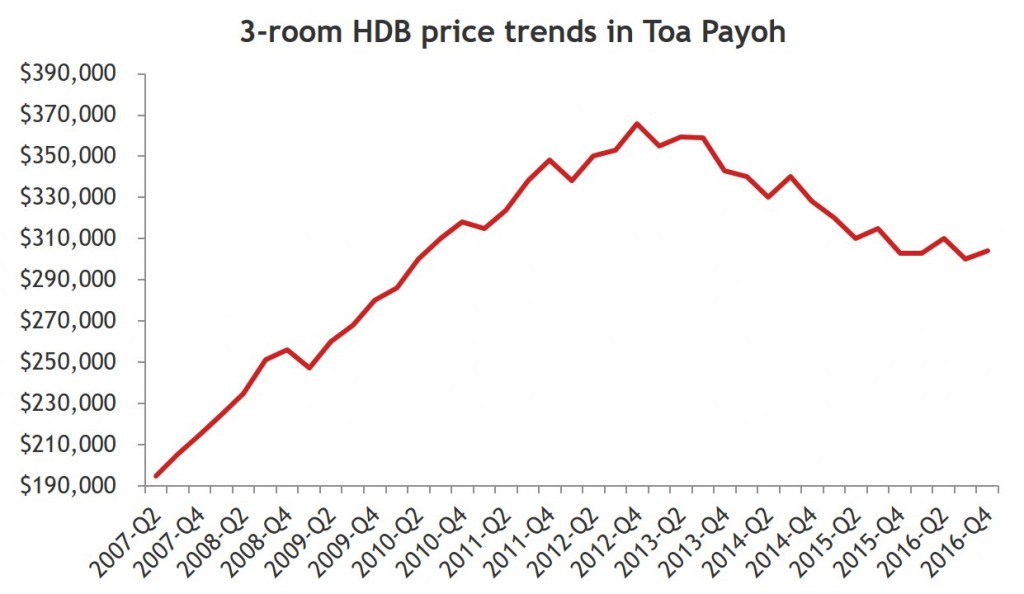 How affordable are prices for flats for homes in Bidadari Woodleigh Hillside HDB development?

Based on the two illustrations shown below, a potential home buyer going for a 3-room or 4-room HDB flat could expect to fork out between $315 to $455 in cash after deducting all the various housing grants, and additional CPF savings, among others. 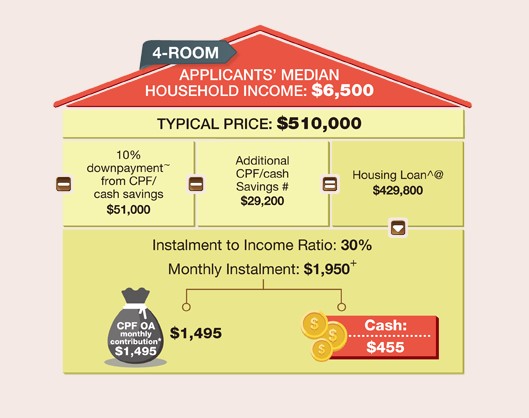 Based on the two illustrations, a potential home buyer going for a 3-room or 4-room HDB flat could expect to fork out between $315 to $455 in cash after deducting all the various housing grants, and additional CPF savings, among others.

The above illustrations assume the median monthly household income levels for a 3-room and a 4-room flat to be between $4,500 and $6,500 respectively.

For example, with a housing loan amount of $297,500 and accounting for the mortgage servicing ratio (MSR) of 30% for second-time HDB home buyers and above, a typical buyer for a 3-room flat in Bidadari could face a monthly instalment payment of $1,350 for a 30-year mortgage loan.

Out of the $1,350 in monthly instalments, and after deducting from the CPF Ordinary Account (OA) on a monthly basis, the home buyer could see himself paying $315 in cash.

Based on the table below, most of the 3-room, and 4-room flat prices at the Bidadari Woodleigh Hillside development are competitive. However, prices for the 5-room flats offered at the same development is higher on the lower end of the range at $579,000 as compared to the resale prices at the lower end of the price range for flats around the Bidadari area at $508,000.

The $120,000 price difference could be due to the comparisons made among 5-room flats located in the Bishan area where the Bidadari HDB town is located nearby. As of Q4 2016, based on data provided by PropertyGuru and HDB, the median price for a 5-room flat works out to around $778,500.

What is next for Bidadari HDB Town

With the overwhelming response shown in the last two HDB launches in the Bidadari area, along with the latest application figures obtained for the May 2017 BTO sales launch exercise, it is highly likely that the new town will continue to attract interest among many home buyers.

The convenience of being close to two MRT stations – Potong Pasir and Woodleigh – along with the amenities nearby, is rare at most times.

Moreover, the town is expected to be one of the few test beds to showcase the government’s efforts in transforming HDB estates into car-lite towns. This is expected to be well received by many potential home buyers looking to establish firmly themselves in the new environment.