The recently completed private condominium development Principal Garden has clearly struck a chord with buyers and industry experts alike since its completion last year. The large-scale residential development, which spans four 24-storey towers, is one of the latest luxury products to hit the market from the joint venture between UOL Group Limited and Kheng Leong Company.

Housing 663 units in total, the design of this project places uninterrupted landscaping and recreational facilities at the heart of the property — an unusual move for a project in such a prime location. Residents enjoy unobstructed panoramic views of the Singapore Botanic Gardens and surrounding green areas sparsely dotted with low-rise bungalows, and of the city, whilst maximising unbuilt open space, a rarity in the urban density of Singapore.

Situated on the cusp of Singapore’s leafy embassy district that comprises Bishopsgate, Alexandra and Chatsworth Park, the 268,716-square-foot development is close to a series of big-name malls, boutique stores, eateries and entertainment outlets in nearby Tiong Bahru, while the UNESCO World Heritage Botanic Gardens is just a five-minute drive away. One of the factors that sets Principal Garden apart is the rich array of onsite amenities that caters to various segments, from families to first-time home buyers and professional couples. Fitness facilities including a gym, tennis court, and aerobics and fitness deck are provided in addition to communal bicycle facilities and multiple swimming pools that encourage healthy living.

For those looking to add some pizzazz to their get-togethers, Principal Garden features dining rooms with attached kitchenettes, BBQ decks and an entertainment suite. There’s even a wine cellar with lounge, plus a music room, reading room, and kids’ play area to ensure residents of all ages are catered for.

What is most noticeable about the development, however, is the amount of space dedicated to nature. As part of the project’s “80-20 garden living” concept, only one-fifth of the entire site is taken up by buildings. The rest is dedicated to gardens and shared green areas which give the property its name. This feature particularly resonated with the judging panel at this year’s PropertyGuru Asia Property Awards (Singapore) 2019.

“Principal Garden by UOL Group and Kheng Leong Company comprises a well-integrated landscape of gardens, pools, and lawns with artworks, creative and generous amenities and four towers situated to capture the best views,” they noted. “It’s an impressive development within such a strongly urban setting.” 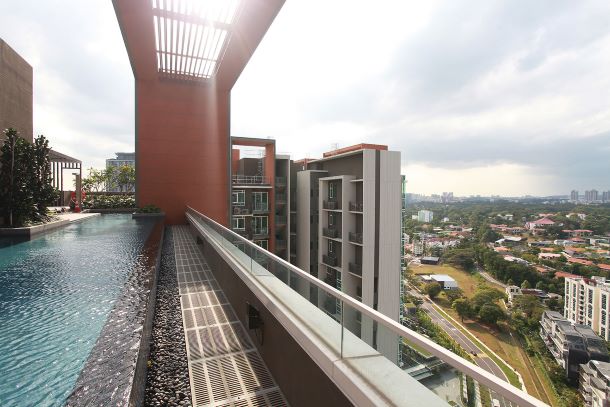 Unit types at Principal Garden range from spacious one-bedroom residences to exclusive five-bedroom properties. Moreover, each building is rotated approximately 20 degrees along the east-west axis to maximise the number of units facing north and northeast, providing impressive panoramas from most of the residences.

UOL Group Limited and Kheng Leong Company are in fact no strangers to success at the PropertyGuru Asia Property Awards. Beating competition from around the region, UOL was named Best Developer (South East Asia) back in 2011, while the landmark Nassim Park Residences jointly developed by UOL Group Limited and Kheng Leong Company picked up Best Condo Development (South East Asia) at the same event. The joint venture took home a total of six awards at this year’s event.

See all Principal Garden for sale on PropertyGuru here.

Midtown Bay: Live In The Heart Of Guoco Midtown, A Vibrant Work-Live-Play District