Tanjong Pagar: A district to live in

Those who want to live close to the Central Business District (CBD) or within the city need not look further than district two.

Among the imposing developments in Tanjong Pagar and Anson Road that dominate the skyline, there are some true gems to be found in this area.

On August 2013, Prime Minister (PM) Lee Hsien Loong outlined plans during his speech at the National Day Rally regarding the redevelopment of the Greater Southern Waterfront. This includes the present day Tanjong Pagar Container Terminal.

In a press release following the the PM’s speech, the Urban Redevelopment Authority (URA) revealed that 1,000 hectares (ha) of land is expected to be used for waterfront living purposes.

The plan to move all the city ports to Tuas has generated a lot of buzz among buyers and sellers in and around district two where the present terminals are located. Many expect a potential spike in property prices, especially since after the announcement of intent to develop a new waterfront living ecosystem that currently is seen only at places like Labrador Park and Harbourfront through developments such as Caribbean by the Bay and Reflections at Keppel Bay.

In a Straits Times article dated August 14 2017, it was reported that the PSA have begun advance preparations by moving all 500 employees from the Tanjong Pagar Terminal to the new Pasir Panjang Terminal. Already, it has dismantled some of its tower cranes to make way for the new Greater Southern Waterfront area. The redevelopment encompassed around 80 ha.

Analysts who spoke to The Straits Times expressed optimism that the government might allow for some land to be released sooner than expected. For this to happen, it is dependent on market conditions and land availability.

Others appear less sanguine. Mr. Desmond Sim of CBRE Research thinks that it might be too early to tell as it is going to be a large project, and since there will be greater price elasticity he does not expect the government to rush in and trigger plans for the waterfront area. Sim added that the state planners would stand to gain if the land is vacated before the lease runs out.

How are prices and rental yield?

In a sample of 10 developments in district two, monthly rental prices on a per dollar sq ft. basis range from SGD3.51 psf for International Plaza along Anson Road to a high of SGD7.15 psf for newer developments like Skysuites also at Anson. The following graph shows the median prices and rental yields for these sampled developments. 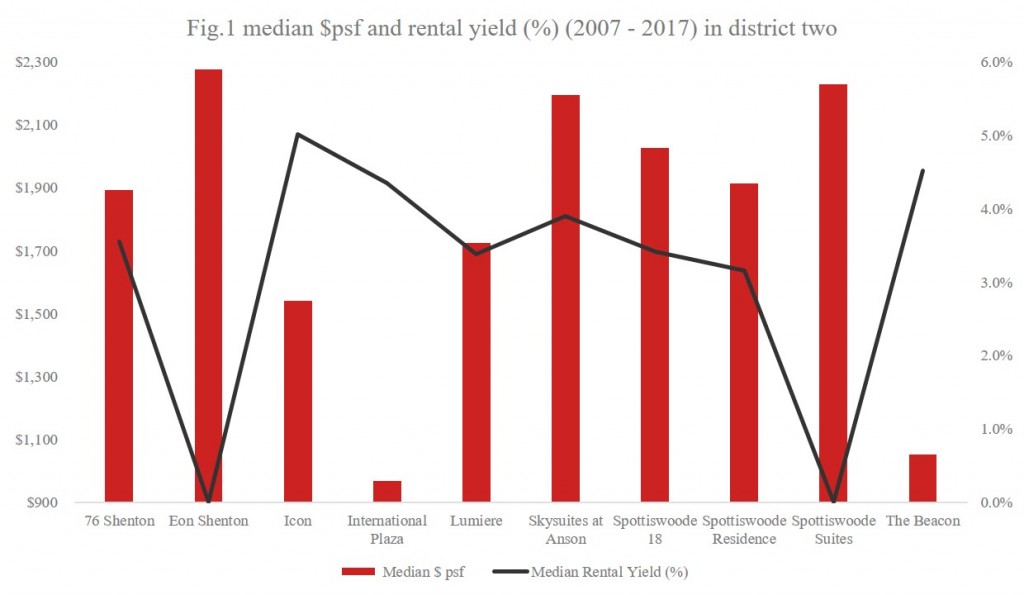 It is interesting to note that International Plaza, due to its age, and perhaps also its’ lesser known status is the most affordable in terms of median prices. Moreover, the rental yield is around 4%, which stands out and close to the 5.0% rental yield seen at Icon, a newer development completed in 2007.

Prices are fairly distributed throughout the past 10 years from as low as SGD405 psf in March 2007 – a year before the Global Financial Crisis (GFC) – to as high as SGD1,316 in November 2013 after the last round of property cooling measures introduced in 2H2013. 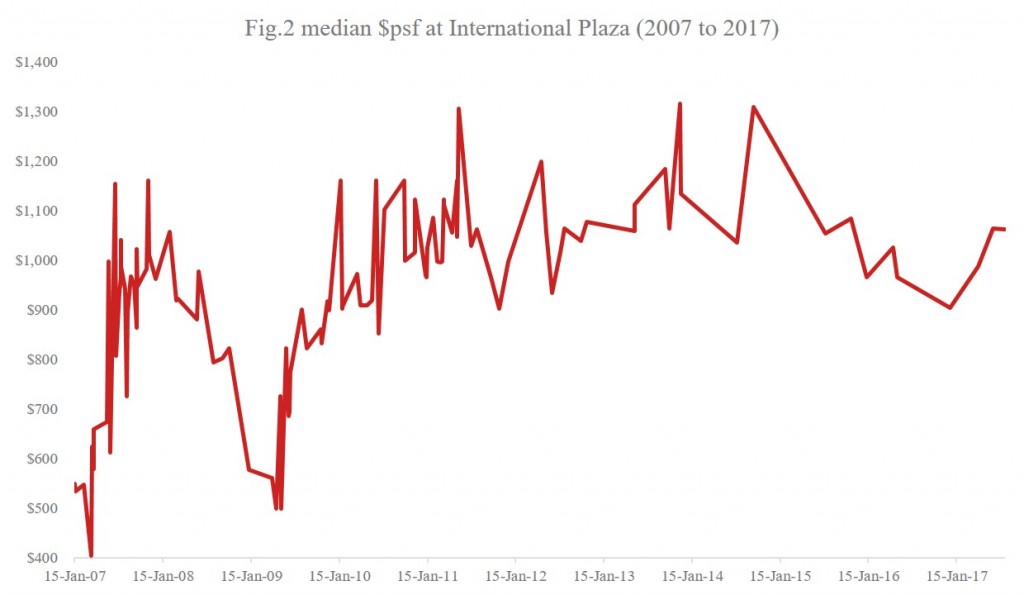 There was a total of 112 units transacted for the past 10-years since mid-January 2007. This year alone, there were three units transacted at close to SGD900 to SGD1,000 psf which is quite a bargain, but comes with a caveat that the development has a 99-year leasehold with about 58 to 60 years left in said lease. As such, there could be some difficulties in obtaining financing with less than the mandatory number of years remaining in the land tenure.

Icon, a 99-year leasehold development close to Keppel Road, Tanjong Pagar and Cantonment Road is considered the most heavily transacted development in terms of volume of units moved (812) in the past 10-years since 2007. This year alone till September 2017, there are 33 units transacted. The transacted prices ranged from SGD1,381 psf to SGD1,841 psf.

Looking at the price trends for Icon

Looking at the price trends for Icon, prices are shown to have risen initially from around SGD800 to SGD1,000 psf to the current SGD1,600 psf to SGD1,800 psf. The latest pricing has stagnated for some time since 2012. 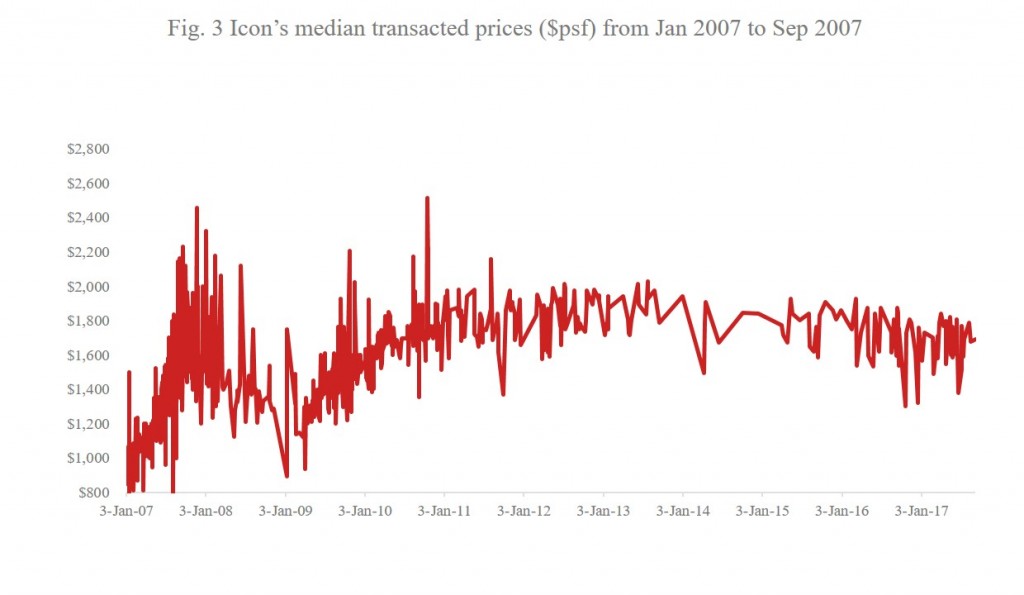 The third possibility could be price competition.

The sheer volume of transactions at above 800 plus units, along with other developments like the upcoming Wallich Residence at Tanjong Pagar Centre which has yet to officially launch. This, along with developments like Lumiere present the investors with plenty of choices. For new entrants into the property market with no outstanding loan obligations and reasonably good credit history, developments like International Plaza where most units are priced under SGD1,000 psf are potential considerations.

As for those who can afford to pay for higher quality housing, a high rental yield, and a ready tenant pool, there are some merits in choosing Icon, especially since the development is a few steps from Tanjong Pagar MRT station and therefore, the city centre.

Potential tenants, including expatriates or those who have plans to take up short-term leasing arrangements, Icon has some advantages for visitors looking for reasonably priced accommodation on a short-term basis, and still be situated within surrounding attractions like The Singapore Flyer, Orchard Road Shopping Centre, and Marina Bay.

With much of the discussion centred on 99-year leasehold developments around the Tanjong Pagar area, it is sometimes difficult to refocus on the benefits offered in the Spottiswoode estate, located near the old Tanjong Pagar Railway Terminal.

All three are freehold. All three also have high transaction turnover despite their distance from the nearest MRT station. Spottiswoode 18 has 255 sales transactions recorded since 2011, while Spottiswoode Suites has 164 transactions since 2013. This leaves the most heavily transacted development in the area – Spottiswoode Residence – which has 350 units sold, of which seven transactions were recorded as far back as September 2017.

Infrastructure developments around the Spottiswoode area

Investors and residents who prefer to be close to an MRT station while living in the Spottiswoode area need only wait a few more years as construction work to fully connect the existing Circle Line is expected to begin in 2018. According to a Straits Times article dated April 13 2017, advance preparatory works to close off the Circle Line loop have begun with tenders for civil works expected to be awarded by end 2017. Construction therefore should start in the first half of 2018. The entire construction works is expected to be completed by 2025 with three stations; Keppel, Cantonment, and Prince Edward.

Though inconveniences, construction noises, and dust are part of the inevitable short-term issues, residents and investors need to think long-term as there will be benefits to accrue in the future.

How are price trends at Spottiswoode Residence? 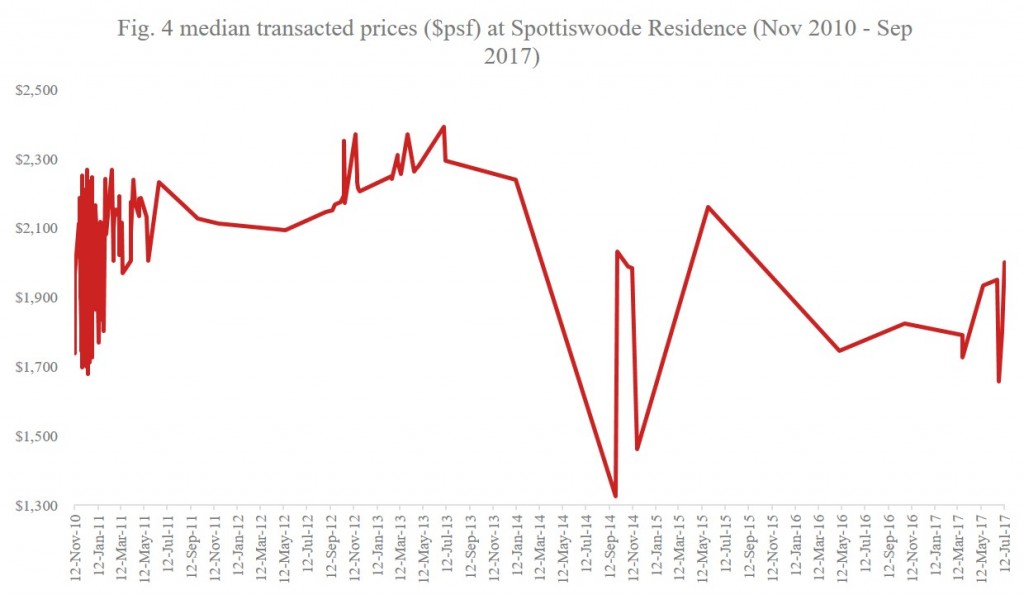 If these prices are compared to Anson/Tanjong Pagar where most of the 99-year leasehold developments are located, there could be some compelling value especially for newer developments like 76 Shenton which was completed in 2014 and fetched around a median of SGD1,892 psf.

Investors with HDB addresses are turning their sights to Spottiswoode developments

Apart from pricing, the median rental yield at Spottiswoode 18 is also slightly higher at 3.4% per annum compared to 3.2% per annum at Spottiswoode Residence. There is no rental yield data recorded for Spottiswoode Suites as it was just completed this year (2017). Although the median rental yields differ by a mere 0.2%, however over the long-term, it’s possible that it will be an edge when investors are doing their planning, especially for those with HDB addresses who prefer to keep their existing flats, and rent out their units to for rental income.

How is value creation seen in developments in district two?

With all these information, and statistics, investors might be wondering if it is still worth considering putting one’s dollars in district two.

As outlined earlier in the beginning of the article on the government’s plans for Tanjong Pagar, the terminals will be moving to Tuas in 2027 to make way for various waterfront lifestyle developments. Construction works to close off the loop connecting the existing Circle Line MRT network are expected to begin next year.

Therefore, investors and residents have some potential sights to look forward to if they choose to invest in properties around the area that could appreciate in the long-run, or to hold onto to the investment with the view that it has all the attributes found in city living, yet not too far from work places and recreation.