The rise of Bukit Batok

Situated close to the Jurong Regional Centre with the Pan Island Expressway (PIE) separating Jurong and the north region, Bukit Batok is known for many of its attractions including the former quarry hill called ‘Little Guilin’ and shopping centre, West Mall.

The Housing and Development Board (HDB) announced in May that for the upcoming August Built-To-Order (BTO) sales launch, there are about 1,410 new flats with units ranging from 2-bedroom Flexi to 5-bedrooms.

The detailed area where the flats are located are shown below: 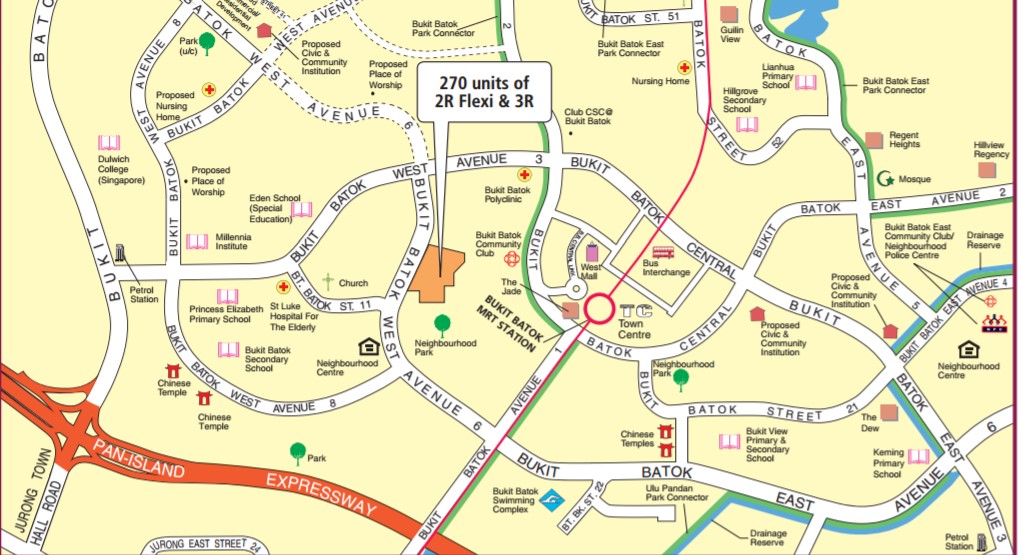 In the 2014 Urban Redevelopment Authority (URA) Masterplan, it was revealed that the government has plans to develop the estate with new and improved amenities & facilities. For example, a new community club is slated to open along Hillview Avenue.

The Hillview area is now being turned into a vibrant town with a new mixed development called The Hillier and HillV2 to serve the needs of the residents and tap into their spending power. The Hillier offers a wide range on dining, and entertainment needs.

The Masterplan also outlined plans for an aged care home set up by Rec Ci Nursing Home which has been in service since it opened in 2015.

One of the unique aspects of Bukit Batok is the town’s closeness to major industrial and commercial developments. The estate is the nearest to nearby Jurong East Central, International Business Park, and retail malls.

The government also made plans toward turning Jurong East into the next commercial hub. This plan is expected to generate additional employment opportunities for many residents living around Jurong East, including Bukit Batok.

Another major aspect of concern is catering to the needs of the small and medium-sized businesses (SMEs), particularly in the light industrial usage, manufacturing, export and import businesses. Due to the nature of some operations like in light manufacturing, the high costs of operations require facilities that conform to tight budgets and still function normally.

The government has recognised their needs and allocated certain tracts of industrial land for common industries where economies of scale can be aligned. An example would be designated industrial areas for car workshop/repairs and another for automation works.

Aside from industrial developments, URA launched a mixed-use commercial and residential site at Bukit Batok West Avenue 6 in 2016. At the end of the tender, a total of 11 property developers were vying for the 158,194 sq ft. site with a gross plot ratio of 3.0.

The site has a maximum permissible gross floor area of about 474,591 sq ft. with a potential to yield more than 400 residential units. The maximum gross floor area (GFA) set aside for commercial use is 64,583 sq ft.

According to an article by Today Online, Mr. Nicholas Mak, Executive Director and Head of Research & Consultancy at SLP International Realty opined that developers were attracted to the site as it was one of the only mixed-use commercial-cum-residential site in the Government Land Sales (GLS) programme for the first half of 2016.

Mak also added, “This is a greenfield suburban site and the developers are basically buying into the future master plan for this section of the west region.” Mak also noted that there are several HDB housing projects that are in development near the actual site. He thinks that once the mall is ready for business, the HDB flats should be completed. This could provide the added convenience of a shopping centre for future residents.

Based on these new developments, there could be more upcoming public and private housing projects planned for Bukit Batok. Moreover, with 291 ha of the 785 ha made available for residential land use, the government could be considering long term projections as it forms its drawing boards for the town’s overall development.

During the final round of the property cooling measures in 2H2013, where the mortgage servicing ratio (MSR) of 30% of total income of a borrower was introduced, prices of three-room HDB flats in Bukit Batok continued to hover around SGD350,000 to SGD400,000. 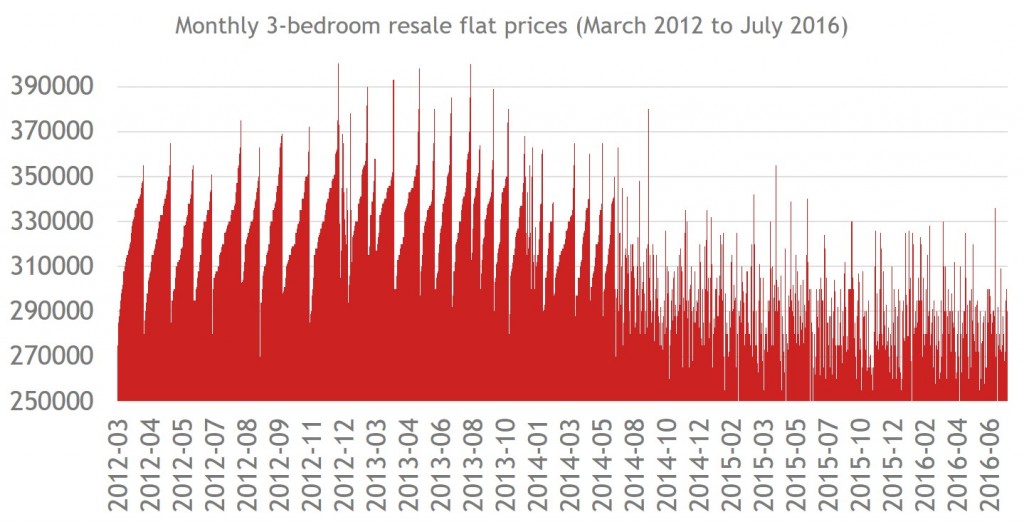 Since 2012, monthly prices have swung from SGD600,000 to the current price of around SGD450,000. The price fluctuations could be volatile due to government policies, resale transaction volume effects, individual household preferences for larger units than 4-bedroom flats, and the overall market conditions that impact flat buying behaviour. 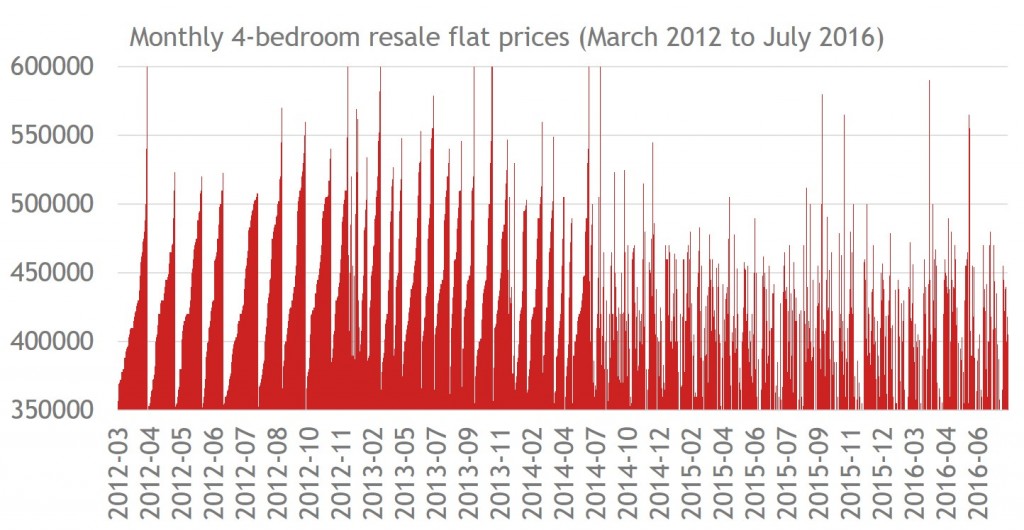 As prices alone have fallen substantially from SGD600,000 to SGD450,000, this might be enough to suggest that prices have largely adjusted to market conditions and could move up if there are expectations for new developments in the area.

Stable prices in the HDB 5-room market in Bukit Batok 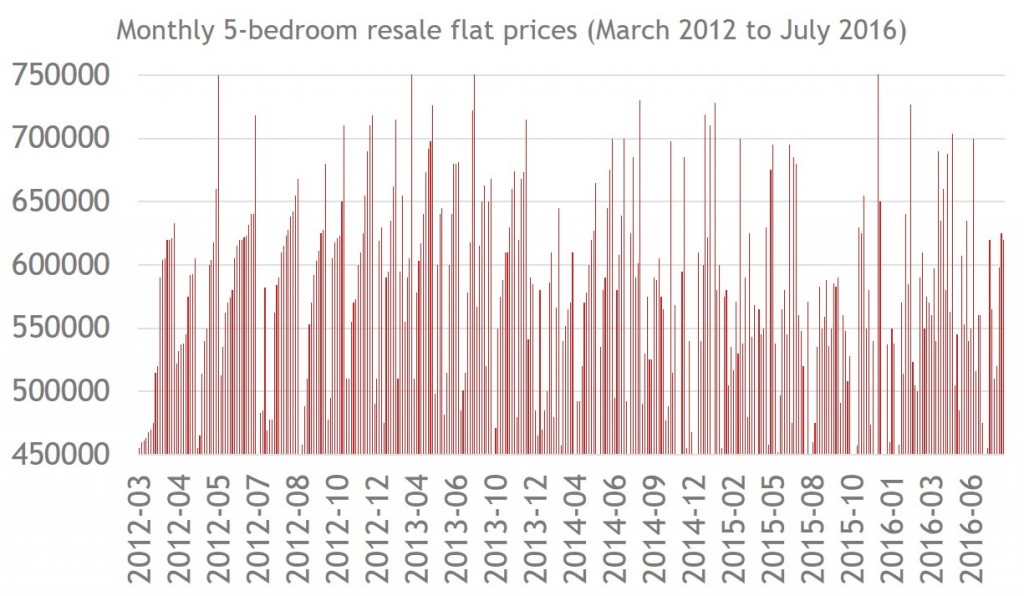 It is possible that the cohort of potential resale buyers could be HDB upgraders who might choose to eschew private or condominium developments, and instead upgrade to a bigger flat to continue reaping the benefits from the various utility rebates offered by the government.

As for possible explanations as to why prices of 5-bedroom flats remained stable in Bukit Batok, it could be that the flat owners or buyers in this category might feel comfortable with the surrounding amenities, including the proximity to nearby MRT, bus interchange, or West Mall. It could also be as simple as not wanting to move out of their childhood neighbourhood.

Looking at the historical prices of the executive maisonette flat prices in Bukit Batok, it is difficult to exactly pinpoint a certain trend due to the scarcity of resale transactions for such flat types. Again, it is entirely possible that the lack of transaction volumes might cause prices to fluctuate without being affected by any significant trends. 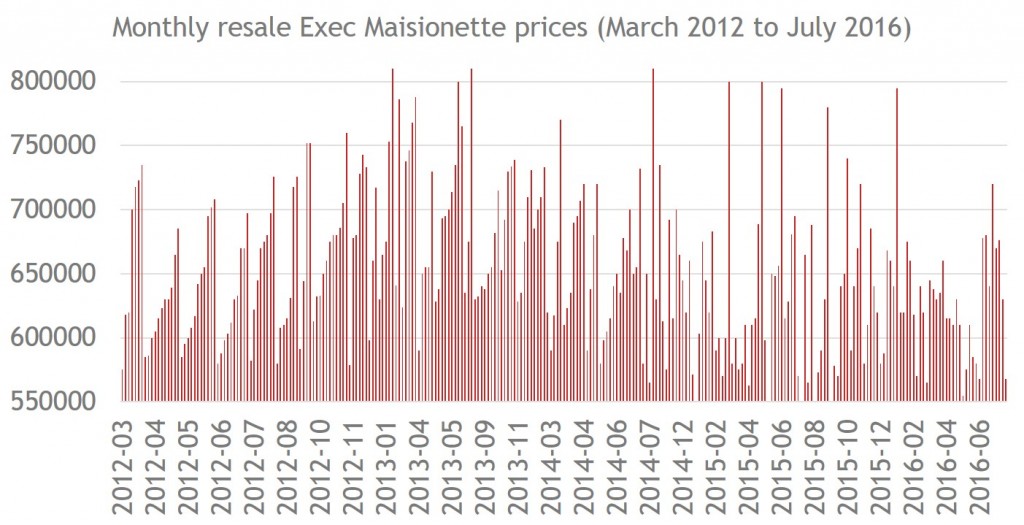 However, the short supply of executive maisonette flats in Bukit Batok, and the rest of the island, might empower these flat types (and their owners) to command some price premiums in the long run. This will also include Bukit Batok especially with many development plans, and proximity to the Jurong East Central where the centre of business activities are located.

Bukit Batok is poised to be an up and coming town

Taking stock of the many development plans and the upcoming BTO exercise in August in the town, the place is expected to attract young families who favour living close to parks like Little Guilin, while continuing to enjoy the various amenities offered with Bukit Batok or Jurong East nearby.

Flat prices are still relatively affordable if one were to look at the 3 & 4-bedroom types. It is expected to be a long-term investment for the future for families who believe in the Jurong and Bukit Batok stories.

Singapore economy to grow 2.7% this year

9 things to consider when buying property in Malaysia