Understanding Woodlands through its home prices

Once a sleepy town situated at the northern tip of the island, Woodlands has become synonymous with a laid-back lifestyle, food, and vast open spaces. The northern HDB (Housing Development Board) town has light industrial zones located nearby with many employment opportunities. The town continues to attract young families who desire to live close to their parents, while providing them with the chance to reconnect with their childhood days.

Moreover, Woodlands continued to attract one of the largest residents among the 26 HDB towns with a population of 242,600 as of end March 2016, per the latest HDB Annual Report 2015/2016.

Lately, the government has unveiled plans for Woodlands Town as part of the ‘Remaking Our Heartland’ (ROH) programme. Under this inaugural programme, HDB outlined plans for Woodlands where it will be transformed into a “star destination of the north”. The plans include six ‘star attractions’ to be rolled out completely across the 1,198 ha neighbourhood, along with a projected 98,000 HDB units to be built over the course of the next few years.

Among the six star attractions identified, these names include “Discovery Playground”, “Woodvista Gallery”, “Woodlands Regional Centre, “Social Corridor”, “Community Nexus”, and “Wellness Haven”. One of the main star attractions is the Woodlands Regional Centre, which includes Woodlands Central and Woodlands North Coast. The Woodlands Central area is the focus of the town as the bus interchange, and connectivity to the existing North-South Line (NSL) and the Thomson East-Coast Line (TEL) – scheduled to be fully completed by 2024 – are located within walking distances.

The other MRT line known as the Rapid Transit System (RTS) Link is slated to be completed soon and will connect Woodlands to nearby Johor Bahru, Malaysia. Construction for the rail system is currently underway, but the complete details are still being worked out on the mode of connection to Johor Bahru. Some of the ideas being discussed include building a bridge across where the trains will run, or an underground system.

Based on the analysis of ten years of data of HDB resale price data for registered applications in the Woodlands area, executive condominium flats have been one of the resilient ones in terms of prices since most have maintained a price range of SGD580,000 to SGD600,000 in recent years. 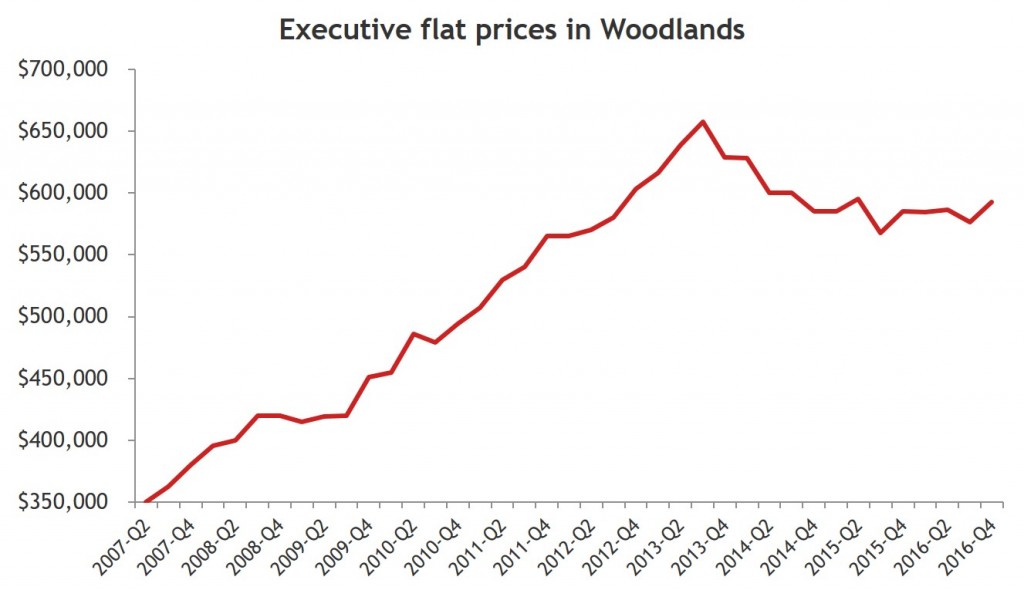 However, the price resiliency cannot be said for the rest of the flat types which showed declining trends across the board. A check with the asking prices shown on Propertyguru.com as of May 10, 2017 indicated that there were around 136 listings, with many sellers who were pricing their units from SGD235,000 with the highest being priced at $370,000 for a 3-room HDB flat in the area.

Additionally, for this particular unit, it is in the Marsiling area and near the Woodlands Checkpoint Terminal with views of the Johor Bahru town across the Straits of Singapore.

The unit is also on the high floor level, and is situated close to amenities such as a Hawker Centre located about 550m. The nearest secondary school is Si Ling Secondary School which is located around 360m away.

Price trends of other flat types in Woodlands

Looking at the median prices of other flat types including the 4-bedroom, and 5-bedroom flats, a similar falling resale price trend is shown. 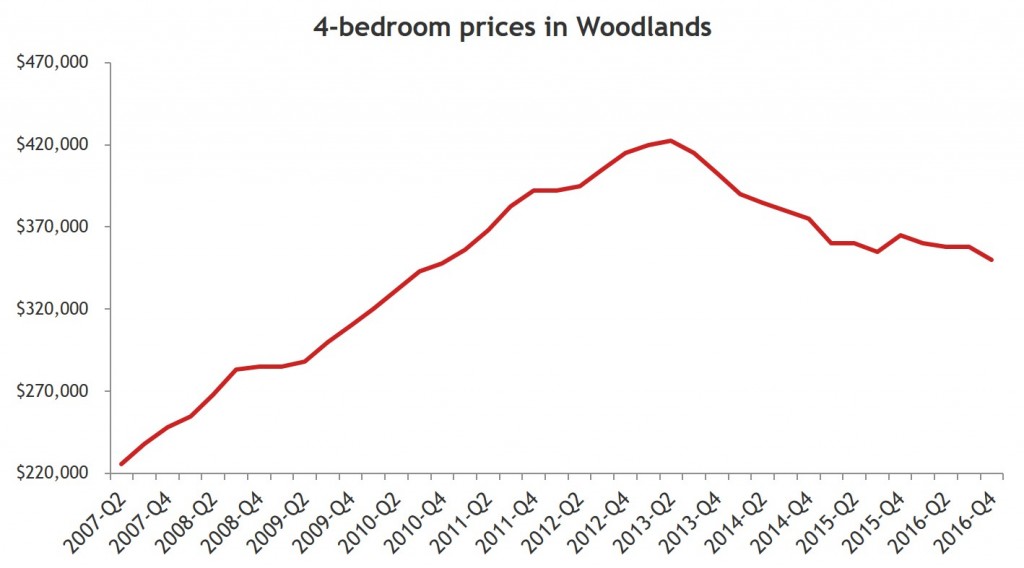 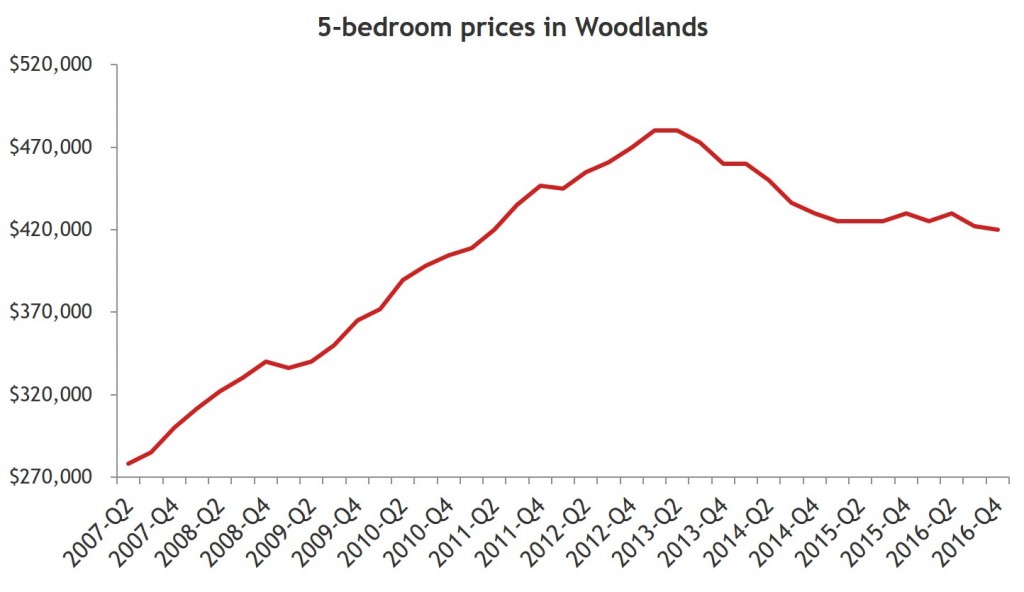 Using the published HDB data of flat prices in Woodlands, there could be some form of price resiliency among the 5-bedroom and executive flat types in Woodlands. Through Propertyguru.com’s data, prices for 5-bedroom prices did dip over the past 12 months, but when the data is extrapolated over the past 10 years, there appears to be some stability. 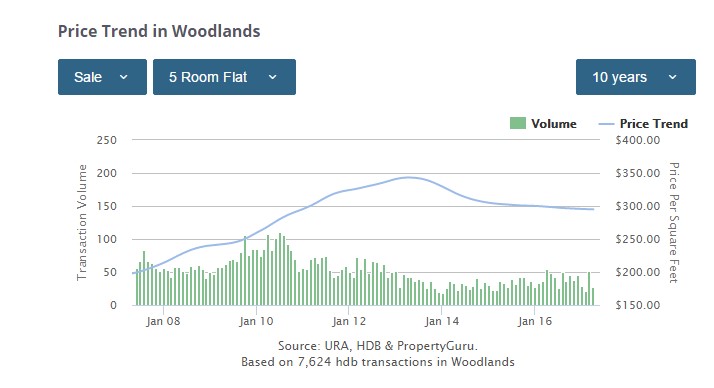 Looking at the one-year price trend for executive flat types, prices have generally rise from SGD320 psf to SGD330 psf, or about 3.1%, and there could be a chance that it might hit the SGD335 to SGD340 psf levels in the next few months given the latest HDB renewal plan has begun, and HDB home buyers and sellers are positioning themselves to take advantage of the market opportunities.

Per HDB Annual Report 2015/2016, a total of 6,191 executive flat types were transacted during the period, and this compares to the 19,639 5-bedroom flats sold during the same period. The most transacted flat unit type is the 4-bedroom units with 27,763 flats sold.

However, it’s likely that the continued pace of increase for executive flat types could also be tested given the uncertain macro-environment, and flat buyers in general would normally hold their purse strings tight, and minimise big-ticket purchases in uncertain times. 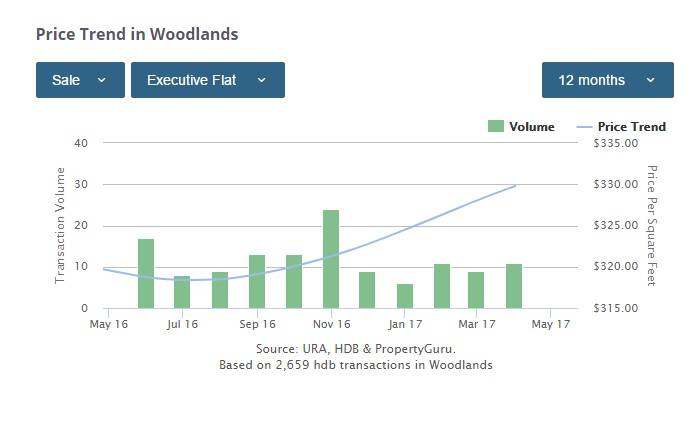 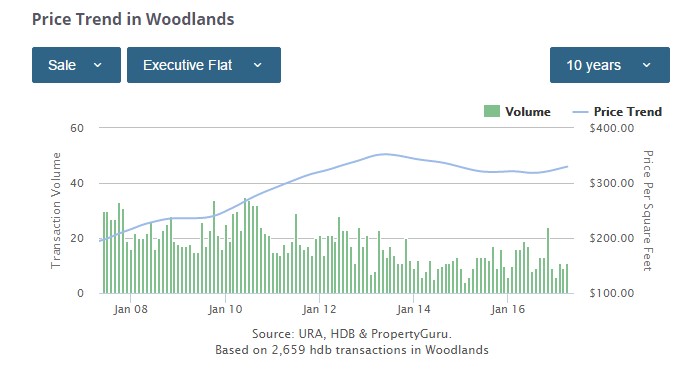 In closing, Woodlands HDB town does have some potential for further growth especially with the development of amenities, MRT lines, factories, business parks, and educational institutions, among others. The town also has plenty of opportunities to rival Jurong East to be an up and coming ‘star destination of the north’.