Understanding Yishun through its home prices

Located between Sembawang and Punggol in the north, lies Yishun, where acres of pineapple plantations used to define the entire town. The 778-ha town was owned then, by ‘Pineapple King’, Lim Nee Soon, who had a road named after him.

Fast forward to present time, the entire Yishun HDB town currently has about 57,538 public flats, with plans to house another 20,000 more which would bump that number up to around 84,000 HDB flats in total, per the latest HDB Annual Report 2015/2016.

Yishun is home to an estimated 187,800 HDB flat dwellers as of March 31, 2016. Under the Master Plan 2014, the government has designated the new town for additional developments under the “Remaking Our Heartland” (ROH) exercise where one of the development plans includes the Northpoint City.

Northpoint City is a multi-functional mall developed by Frasers Centrepoint Limited (FCL) and is expected to serve the transportation, and other functional needs of the entire town. The present mall, Northpoint, including the Yishun 10 retail podium is currently undergoing a comprehensive 18-month Asset Enhancement Initiative (AEI) which aims to integrate next-door Northpoint City to provide additional amenities.

The entire development is expected to be fully completed by December 2018. A peek at the plan is as follows: 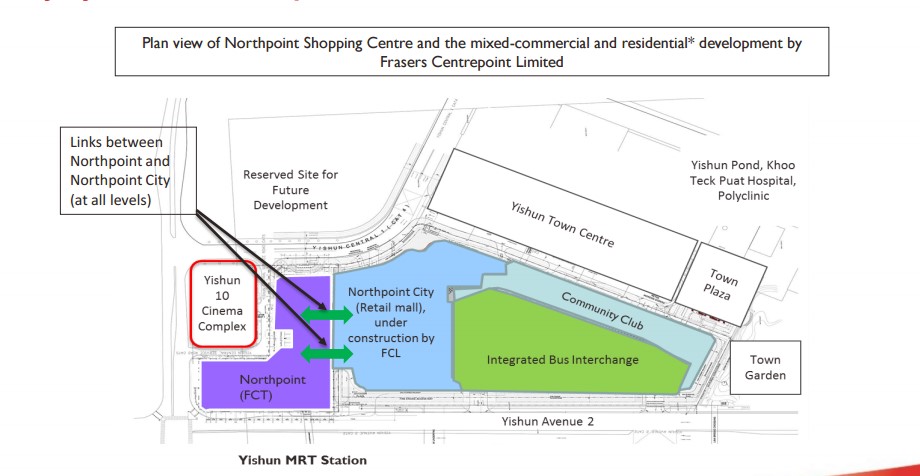 Apart from serving the needs of Yishun’s residents through the integrated mall like Northpoint and Northpoint City, the government has also embarked several initiatives under the Master Plan 2014 to create a community focused environment. This is done through the upgrading of the pedestrian mall in Yishun town centre which now includes a plaza and green gateways.

The Yishun Pond located close to Northpoint will also see a new addition of a landmark called The Spiral @ Yishun. This new landmark comprises of a three-storey lookout tower that offers residents with a panoramic view and easy access to Yishun Park via an overhead pedestrian bridge.

Moreover, the government is also planning to expand the existing Khoo Teck Puat Hospital (KTPH) which currently serves the needs of residents living in the north region. The plans include a new hospital called Yishun Community Hospital that would be built alongside with KTPH with aims to expand the number of beds while serving as a focal point for fulfilling medical needs of the residents.

Based on the price trends for 3-bedroom, 4-bedroom and 5-bedroom HDB flat types in Yishun, in post Q3 2013, after the government announced the property cooling measures, prices dipped significantly at the start across the board, but have managed to stay stable throughout starting from the following year in 2014.

One of the main cooling measures impacting HDB dwellers is the mortgage servicing ratio (MSR) which is kept at 30% of the monthly gross income spent on mortgage payment. 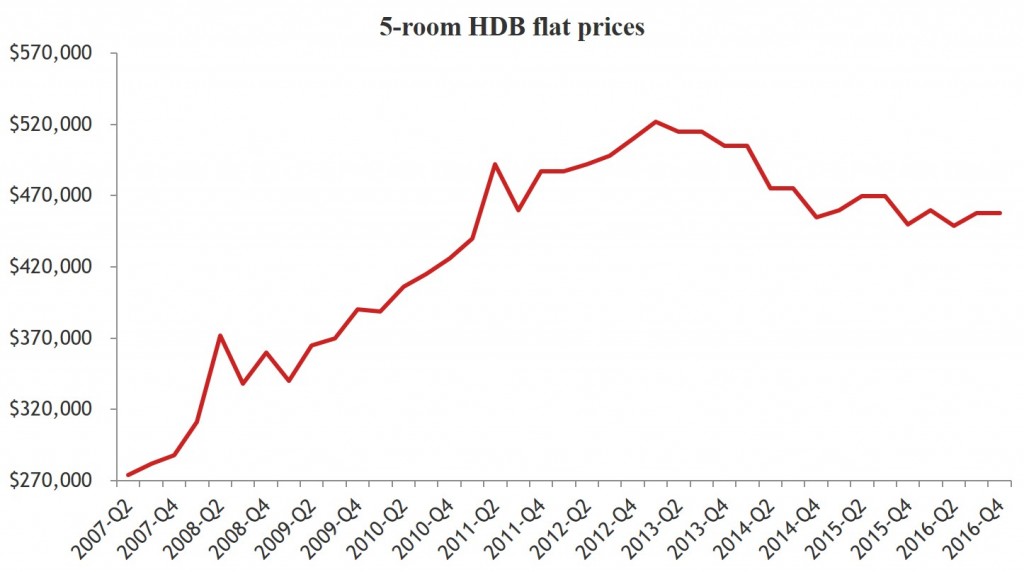 Looking at the three price trend charts above, among the 3-bedroom, 4-bedroom and 5-bedroom HDB flat types, the 4-bedroom HDB flat median prices have increased slightly since Q2 2016 where the prices increased from SGD360,000 in Q1 2016 to SGD370,000. This represents an increase of around 2.7%.

Taking a look at the 12-month historical HDB prices for 3-bedroom flats in Yishun, prices in general have been falling from the peak of SGD371 psf to SGD364 psf. 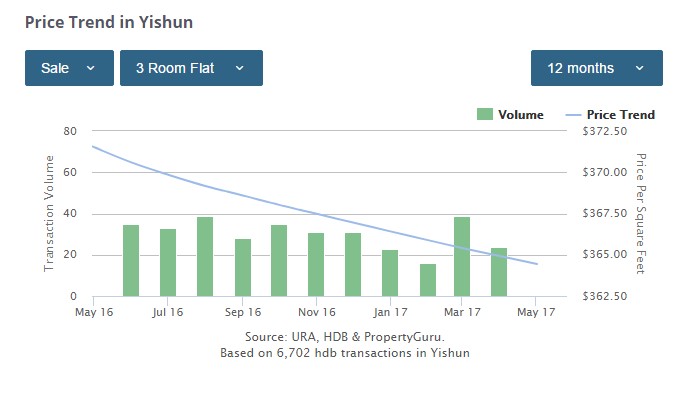 However, the percentage decline is about 1.9%, and transactions volumes do take a seasonal path. 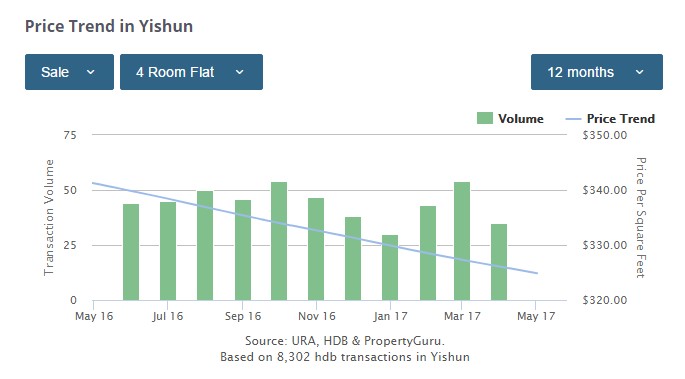 Flat prices for 4-bedroom units on the other hand, show a steeper decline at around 4.3% for the past 12 months. So, a price decline to SGD320 psf or below is not a surprise as resale transactions volumes seem to pick up north of 50 units in October and March, while 3-bedroom flats transaction volumes are still below 40 each month. 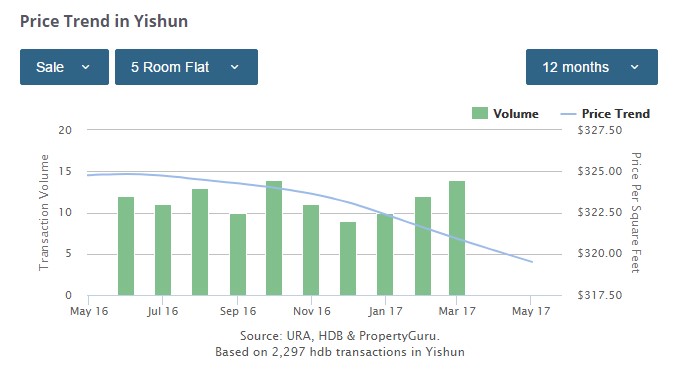 For the 5-bedroom HDB flats (shown below), the pace at which resale flat prices have declined is less steep when compared with the 3 & 4-bedroom HDB flats. In the case of Yishun, 5-bedroom resale prices had a mere decline of 1.6% in the past 12 months. This suggests there could be some price resiliency among these types of flats.

Additionally, transaction volumes for 5-bedrooms flats are not as robust when compared with 3 & 4-bedrooms. There is an average of five to 15 resale flat transactions completed each month since last year for the 5-bedroom flat types in Yishun.

A check with PropertyGuru.com on May 13, 2017 with the highest to lowest prices sorted out, the consensus is even though the median price for 5-bedroom flats was calculated to be around SGD457,900, a home owner has put up an asking price of SGD750,000. This is about SGD200,000 above the second highest asking price.

It is important to note that this is a Design, Build and Sell Scheme (DBSS) flat with the unit located on the high floor. It also has three bedrooms, and three bathrooms.

DBSS flats were introduced by HDB in 2005 where although the flats were meant for public housing, they were built by private developers. However, the construction of such flat types was suspended in 2011.

A check on the location of the flat on Google Maps, shows that there is about a 15-minute walk from where the flat is located to Yishun MRT station and Yishun Central. Despite a relatively long distance, it is possible that the owner has spent quite a big sum in renovating the HDB flat, and perhaps it does command a premium based on the Asset Enhancement Initiatives (AEI).

How living in Yishun will be like in the coming years

In the analysis of HDB flat prices, the understanding is that prices have declined across the board for most flat types. However, there are some exceptions including those flats that are of bigger room size, and flats that were built under the DBSS scheme.

These prices are further affected by HDB dwellers considering the distance to nearby amenities, the cost of their renovations, and their mortgage payment plans, among others before a final asking price is determined, independent of the valuation.

It is important for flat owners to think on a long-term basis, and take the advice of the latest remarks by the National Development Minister that they should not be overly dependent on selective en-bloc schemes (SERs) that may result in overpricing their flats. This might apply to those flat owners that are living in flats built around the 1990s in Yishun.

Yishun is a non-mature estate in the eyes of HDB, but the town is slowing getting the attention of many potential residents who desire a place where they can raise a family, go to work/school, and enjoy the amenities around the place.

With an integrated transport hub, and multi-functional mall, it is a strong possibility that HDB flat prices have the potential to appreciate over time.