View of high-rise condominiums in Singapore.

Which condominium projects have provided investors with the highest rates of rental growth over the last few years?

To find out, I used a free URA “e-Service” that provides quarterly statistics on median rents for non-landed private residential developments with a minimum of 100 units and at least 10 leases signed every quarter*.

To help reduce the impact that differences** in the units leased from period to period might have on the accuracy of the estimated growth rates, I took the average of the median rent reported by URA for all four quarters of a year and only included projects with rents reported in every quarter.  This meant there was a minimum of 40 leases each year in each project, though the average was between 120 and 130 leases.

Looking for a rental property in Singapore? Find an agent to take the hassle out of your home search.

I estimated the growth in median rentals across all projects that met the inclusion criteria over one, five and 10 years to 2018 with the overall results shown in Table 1.  The number of projects used to estimate growth over each period varies, mostly because of the rise in condominium stock in recent years.

Table 1. Rental growth across non-landed projects with over 100 units & at least 40 leases p.a.

The last few years have not been a great time for landlords. Over 10 years to 2018, the median rent across all projects fell by about 1.4 percent per annum, and by about 4.2 percent per annum over five years. To be fair, these growth rates do mask periods when rents rose. For example, the URA’s rental index rose by about eight percent in the first half of 2008, and then fell by about 20 percent to the end of 2009.  Rents then rose by about 27 percent until late 2013, after which they drifted down steadily until starting to stabilise in 2018.

Rentals over 2018 fell by only 0.4 percent, showing that conditions have improved overall, and about 42 percent of the projects included experienced stable or growing rents.

Let’s turn to the top performing projects.  Here I show the 15 projects with the highest annual rental growth rates over one, five and 10-year periods.

The results in Figure 1 might surprise you. J Gateway in Jurong East was the best performer over 2018 with rentals growing by 8.9 percent.  In second place was Foresque Residences in District 23 near Dairy Farm Road at 7.3 percent.  Cairnhill Nine in District 9 came in third place at 5.6 percent.  Interestingly, there were only two other projects out of the top 15 in central locations (The Plaza and Mirage Tower). Why did newer projects perform well?  It’s possible that they contained large numbers of units intended for rental and after TOP many were being marketed, thus giving tenants plenty of choice.  As units were taken up and vacancies fell, rents might have risen by more than the wider market. Just a hunch.

Foresque Residences, Tree House and The Lanai in District 23 together with Waterfront Isle and Waterfront Key in District 16 may have also benefited from the completion of Stage 3 of the Downtown MRT line in 2017.

Ocean Park in District 15 was the best performer with rents falling the least (0.6 percent per annum) with Waterside also in District 15 coming in fourth best with a 1.8 percent fall per annum.  Both these projects are relatively older and contain apartments over 2,000 sq ft in size, so perhaps they benefited from families relocating from en bloc projects. 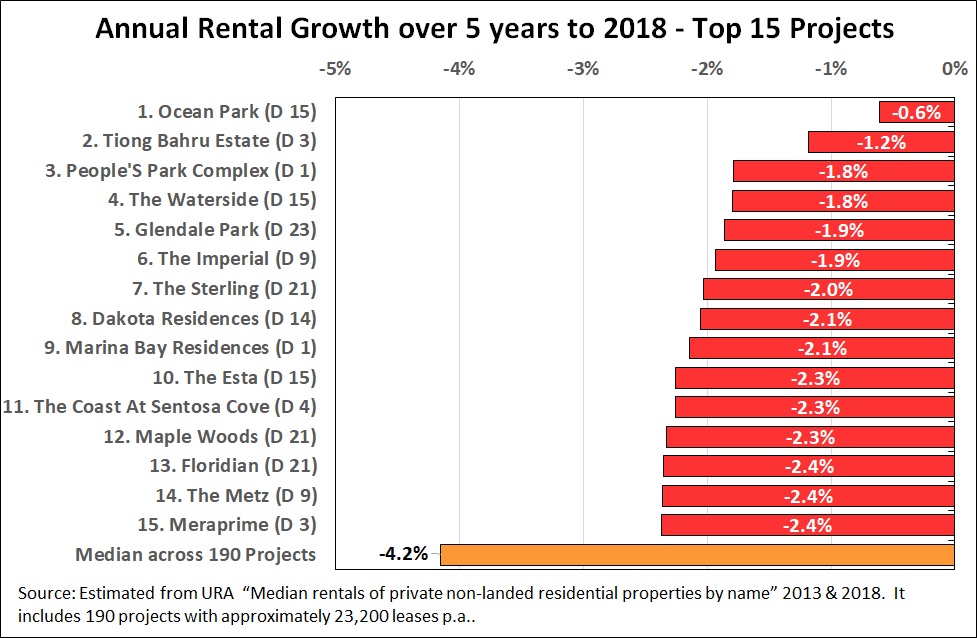 Tiong Bahru Estate and People’s Park Complex came in second and third respectively. Both are old by Singapore standards but very centrally located. Two District 9 projects made it into the top 15 (The Imperial and The Metz), as did Marina Bay Residences and The Coast at Sentosa Cove.  Meraprime in Tiong Bahru also made 15th spot. There were three projects in District 21 (The Stirling, The Maple Woods, and Floridan) that may also have benefited from the new Downtown Line. Again, no projects in Districts 10 and 11 made the list.

For growth over 10 years the pool of projects shrinks to 109. Many of the projects in the top 15 are much older than 10 years, with the youngest completed in 2005 (The Waterina).

The top performing development over the last decade was not even a condo, it was Tiong Bahru Estate (2.7 percent rise per annum), a privatised conservation area with apartments developed in the Art Deco style. The marketing hype suggests that it’s become very chic and perhaps its central location and possible extensive renovation of units helps explain its relatively good performance.

In second place was People’s Park Complex, which is of course very centrally located in the CBD, though it’s certainly not in the chic category, being quite old and may also go en bloc (as have some other projects that made the top 15). With the exception of the top two performers that are both in very central locations, the other 13 are spread across Singapore. None are in Districts 9, 10 or 11.

The opening of the Circle and Downtown MRT lines probably helped some make the top 15 list. In District 19, Chiltern Park and Chuan Park are located close to Lorong Chuan MRT station while Sunglade is not too far away. Over in District 23, Hillview Heights and Glendale Park are close to Hillview MRT station.

District 14 also has three projects in the top 15 list. All three are in the Geylang area with Sunny Spring and The Waterina also within walking distance of Dakota MRT station on the Circle line.

How to make sense of these results? Firstly, we need to remember that only projects containing over 100 units were included, so we don’t know how many smaller projects might have made the top 15 list. With this caveat, it seems that projects with smaller units have performed quite well over the short term (one year), but not necessarily in the most central areas. Over longer periods, older projects performed well, possibly due to their locations and larger unit sizes. Over all the time periods, projects in the traditional prime rental areas of Districts 9, 10 and 11 did not often make the lists, which probably points to some restructuring in the rental market as supply has increased in decentralised locations and the introduction of new MRT lines has improved accessibility across Singapore.  We can take a closer look at this in another article.

I am sure readers will have thoughts on the results and these are welcome. Until next time.

*The service is called “Median rentals of private non-landed residential properties by name” and is available on https://www.ura.gov.sg/realEstateIIWeb/rental/search.action.

**Major differences can include the size of units leased, number of bedrooms, floor level, views and facing, furnishings included, and whether units are in renovated or original condition.

The author and PropertyGuru do not give any warranty as to the accuracy, reliability or completeness of information which is contained in this article.  Except insofar as any liability under statute cannot be excluded, the author, PropertyGuru and its employees do not accept any liability for any error or omission in this article, or for any resulting loss or damage suffered by any person or organisation.

Check out PropertyGuru’s properties for rent! Alternately, refer to our other handy rental guides, or read more about the hottest areas to live in with PropertyGuru’s AreaInsider