According to figures revealed by the Ministry of National Development (MND) on Monday 7 November, the average selling price psf of BTO flats in mature estates has increased from S$479 in 2012 to S$584 in the first three quarters of 2022. This translates to a price psf increase of 21.9% in the last 10 years.

In comparison, the average selling price psf of BTO flats in non-mature estates has risen from S$311 in 2012 to S$362 in the first nine months of 2022. This means that prices of BTO flats in these areas have risen by 16.4%, which is slower than the price increase for new flats in mature estates.

The figures are part of a written parliamentary reply by the MND to non-constituency MP Leong Mun Wai, who has asked for the average selling price, land cost and subsidy psf of BTO flats from 2012 to 2022.

In its reply, MND noted that in pricing the BTO flats, HDB first determines the market value of new flats based on prevailing market conditions, prices of nearby comparable resale flats and individual attributes of the flat, such as location and storey height. Subsidies are then applied to ensure that these flats are affordable.

It highlighted that the amount of subsidy applied to the projects depends on the prevailing market conditions, location and attributes of the flats.

According to our Researcher data, prices of HDB resale flats in both mature and non-mature estates have increased by around the same rate over the same period, at 17.32% and 18.63% respectively. 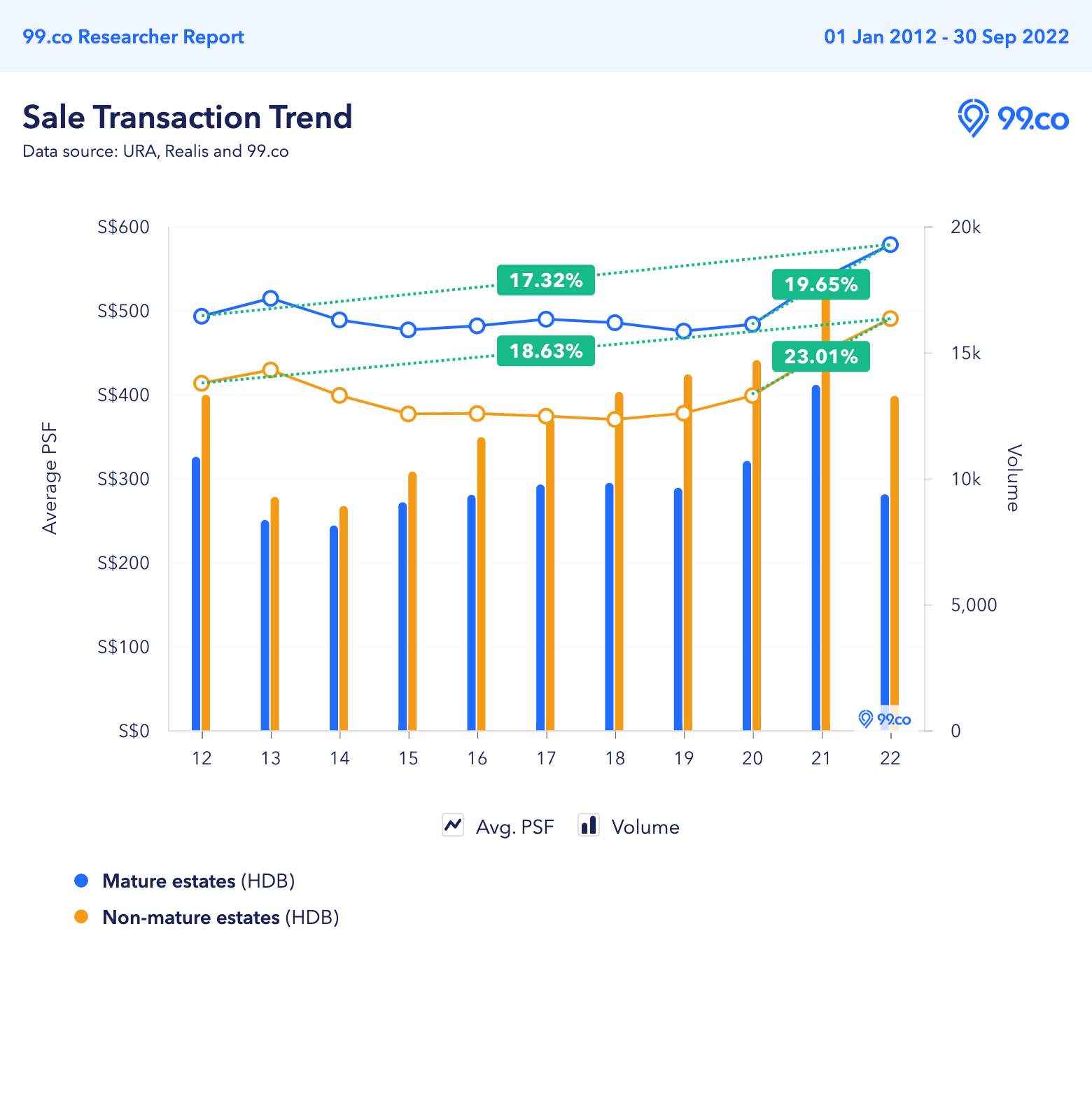 A closer look at the data reveals that in the last two years, prices of resale flats in non-mature estates have increased faster at 23.01%, compared to the price increase for mature estates at 19.65%.

Despite the 30% increase in construction costs in the last two years, MND said it has increased subsidies to keep BTO flat prices relatively stable.

“As such, it is not meaningful to compare it across years,” the reply stated.

On Monday, Second Minister for National Development Indranee Rajah said in Parliament that interest in land (such as leases) can be carved out and granted to other people for the duration of the lease. When state land is sold, it is converted from a physical asset to a financial asset. The sale proceeds go into financial reserves, which the Government invests.

The typical lease of land sold by the state is 99 years.

At the same time, she added that the financial proceeds are to make up for the state’s loss of the use of land for 99 years.

After the lease runs out, the land will revert back to the state.

This is a reply to Leong, who has asked about the sale of state land, land sales proceeds and the reserves.

She also added the reason why HDB pays fair market value for land from the state, instead of having it transferred at zero cost, given that it is a transaction between the government and a government agency.

The explanation given was that the land sale to HDB would mean that land is taken out of past reserves. By not paying for it at market value, past reserves would be depleted.

“Not meaningful” to reveal development costs

On the same day in Parliament, Leader of the Opposition Pritam Singh and Indranee argued over whether the development costs of new BTO flats should be revealed.

Singh’s question had arisen from the recent correction direction issued to former GIC chief economist Yeoh Lam Keong over his Facebook posts on the S$270 million loss for the Central Weave@AMK BTO project.

After some back-and-forth exchange, Indranee said that it was “not meaningful” to reveal the development costs, adding that the key thing for buyers is affordability.

Last week, HDB announced that it has incurred a record deficit of S$4.367 billion in the financial year 2021. The bulk of the deficit came from the expected loss for flats under development, gross loss on the sale of flats and disbursement of CPF housing grants.

This comes after rising concern about the affordability of public housing, with an increasing number of headline-grabbing million-dollar flat transactions. The Ang Mo Kio BTO also drew significant attention when it was launched for sale in August, as 5-room flats were priced ranging from S$720,000 to S$877,000.

Do you think public housing is still affordable? Let us know in the comments section below.

The post Average price psf of BTO flats in mature estates has risen by 21.9%, faster than those in non-mature estates appeared first on .