Are EC Prices Becoming Too High?

The gap between prices of Executive Condominiums (ECs) and mass market condos has been observed to be narrowing in recent years. For instance, the upcoming Piermont Grand EC is expected to launch at the $1,000 psf threshold.

It is a common assumption that Executive Condominium or EC projects are typically priced significantly lower than private properties. However, the narrowing gap between prices of ECs and mass market condos in the Outside Central Region (OCR) in recent years has come to challenge this popular notion.

For example, the EC, Rivercove Residences set a new high for EC prices when it came close to breaching the $1,000 per square foot (psf) threshold during its April 2018 launch.

On a median psf basis, we saw an increase of nearly 22% in transaction prices of new EC projects between 1Q2015 and 2Q2019 (as shown in the chart below). 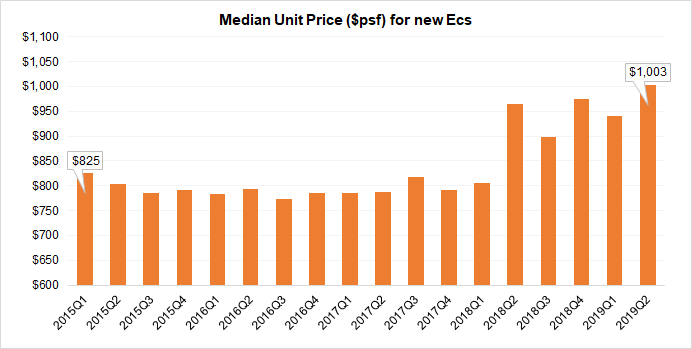 Recent trends suggest that prices of new EC projects would continue to rise. For instance, the site of the upcoming Piermont Grand EC was sold at about $583 psf per plot ratio (ppr), which means that the estimated breakeven price for units at the development could be around $1,000 psf or higher.

This new pricing threshold in new EC launches comes quite closely to that of certain new projects in the OCR during the first half of the year. For instance, new projects such as Parc Botannia, Treasure at Tampines and Riverfront Residences have been transacting at psf prices that hover around the $1,250 and $1,300 threshold. 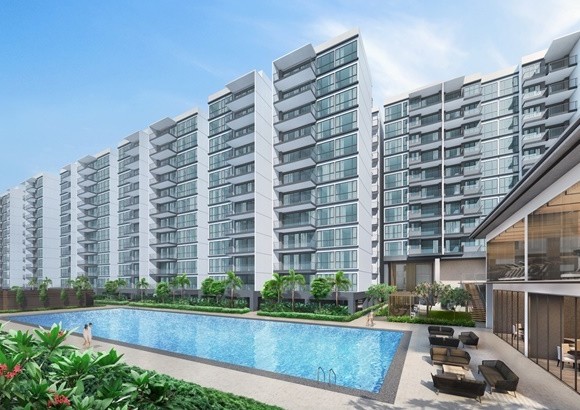 Meanwhile, Treasure at Tampines (shown above), launched in March this year, moved 272 units or 56 per cent of the 490 units released at an average price of $1,280 psf during it launch weekend. The project comprises 2,203 units and is touted as Singapore’s largest condo development.

The narrowing price gap in new EC projects and OCR condos in recent times has put many HDB owners who are looking to upgrade at a greater dilemma.

However, with Piermont Grand being the first EC launch in 2019 and likely the only one of the year, we expect to see keen interest in the project, especially with the pent-up demand for ECs.

Located near Nibong and Sumang LRT stations, which are linked to Punggol MRT station and bus interchange, the development will be close to the upcoming Punggol Digital District.

Whether you’re looking to buy a private condo or an EC, get insight on the best locations for your new home with our AreaInsider Guides.

Have EC prices become too high? What’s your take on this? Let us know in the comments’ section below!