Marina Bay: A district one should watch

Mention district one in Singapore and images of a place busy with officer workers during the days spring to mind. But nighttime, weekends and public holidays, the relentless traffic of the work days slow to a crawl rendering district one into something akin to a ghost town; at least in the imagination of one unfamiliar with the district.

In truth, there are many vibrant and exciting things that happen in downtown Marina Bay area than just business. And there’s more to it than simply being the financial district.

By night, Marine Bay’s skyline is illuminated by light shows courtesy of the super trees at Gardens by The Bay. Festival seasons like the Mooncake Festival, the Chingay Parade, and the Hong Bao Show during Lunar New Year, also imbues the Bay with a jolt of energy.

But for people who’d rather a calming and peaceful time, merely look out from the top floors of any skyscraper or hotel and a vast view of the sea and the Indonesian Riau Islands await on the horizon.

Such things make living in the district tempting. So, comes then the million-dollar question; how much does it cost to live in district one?

As is the first step in all property purchases, the inaugural thing to do is to determine whether the property is for personal or investment purposes. Second, there is a need to identify the costs associated with living near or in the city itself. The price to pay for city living is a stark difference from living in the heartlands. 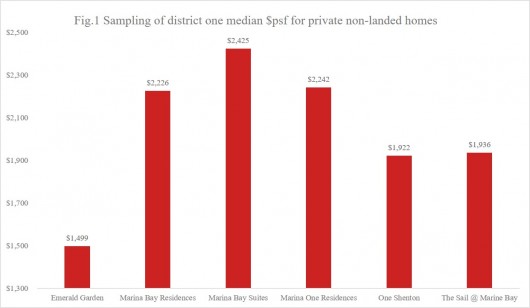 Looking at the sale prices on a per square foot (psf) basis, Emerald Garden appears to be priced lower than most other developments in district one. To understand this better, here is a brief retelling of the history of its’ development.

Located near Club Street where nightlife is constantly active, comes the rare 999-year leasehold development named Emerald Garden. It was completed in 1998 by Lum Chang Holdings Limited. The 11-storey development of 265 units have rooms that range from studios measuring around 721 sqft. to 4-bedroom units as large as 1,990 sqft. There are a few common condominium facilities including gymnasium room, a swimming pool.

The development is located across Cross Street, with accessibility to the Central Business District (CBD), and nearby Chinatown. Its location is convenient for people who already work in the CBD area and would therefore live close by, in the city.

Its long tenure, closeness to the CBD and nightlife makes it a development that isn’t just attractive for locals, but expatriates as well, provided they’re not averse to the loud music during the weekends and the human traffic on Friday nights.

With the price psf ranging from SGD1,000 to SGD1,900, prices have largely stabilized around SGD1,500 psf to SGD1,600 psf for the past 10-years. Compared to other newer developments like Marina Bay Suites or the soon-to-be completed Marina One Residences, if the age of the property is not a concern, then Emerald Garden is a good consideration. 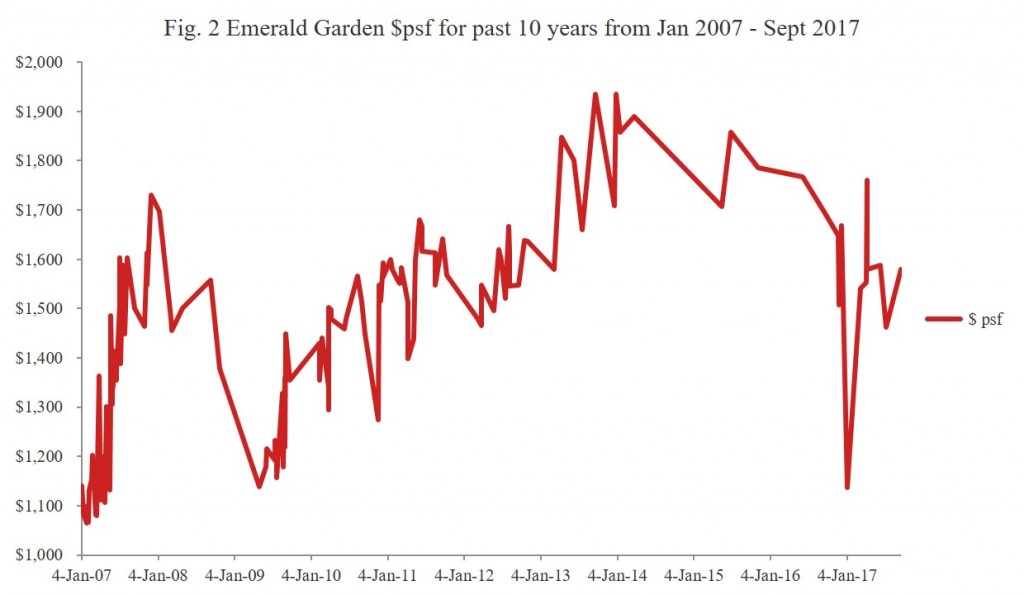 In addition, it is also a decent entry point for aspiring buyers who are looking for value-added properties to invest in. And at 999-years, the development is as good as a freehold, and therefore presents some advantage when compared to the 99-year leasehold developments centered around Marina Bay.

However, a potential disadvantage could be its height of only 11-storeys. Its relative shortness may not grant the skyscraper type views as is the wont of many other buildings in Marina Bay. Investors also need to consider other factors like loud music and accessibility, among others whether the property is for their own stay or investment.

How are the listing prices for Emerald Garden?

A check of the asking prices on PropertyGuru showed them starting at SGD1.85M or SGD1,735 psf for a 2-bedroom unit measuring around 1,000 sqft. to SGD2.5M, or close to $1,900 psf for a 3-bedroom unit measuring about 1,300 sqft. Depending on the type of furnishing, units are naturally priced higher with full furnishing included. The median transaction price for the last 10-years works out to SGD1.53M.

For the 2-bedroom unit with an asking price of SGD1.85M or SGD1,735 psf, it is fully furnished and located on the ground floor spanning around 1,066 sqft. Ground floor units could appeal to investors who aren’t bothered with the lack of a view and instead prefer more efficient access to the facilities nearby like the swimming pool and gymnasium.

Although the monthly listing rental price of SGD3.78 psf presents some value as it is priced with around a 10% discount from the median monthly rental price, one is advised not to jump in immediately and should instead view the apartment, and enquire about matters like ownership details, history of the unit, and any repairs done so far, among others. The last thing an investor would want is to deal with plumbing or heavy repairs- related issues.

Moving on to the Marina Bay area, one of the first developments built is The Sail @ Marina Bay. The development is priced competitively at a median of SGD1,936. When it was developed and completed in 2008 by City Development Limited (CDL), it was touted as the only residential development fronting Marina Bay that offered residents complete views of the bay area and the sea depending on the type of facing.

At 70 floors with 1,111 units the 99-year leasehold development is ideal for investors seeking quality homes with good views as well as space to entertain friends and relatives; a boon during special events like National Day, New Years’, and Formula One (F1) races. The unit was first purchased on March 2007 for SGD2.18M or SGD2,049 psf before the global financial crisis in 2008. The owner of the original sale profited a good return of 70.7% return in the space of three years.

However, when compared to the original transaction back in early August 2007, that same unit was bought for SGD1.43M (SGD1,599 psf), so the gain works out to be approximately 4.6%.

Property rental yields in District One

Investors seeking for investment properties and are considering district one developments, the following chart provides an overview of the historical median price psf, and the rental yields. 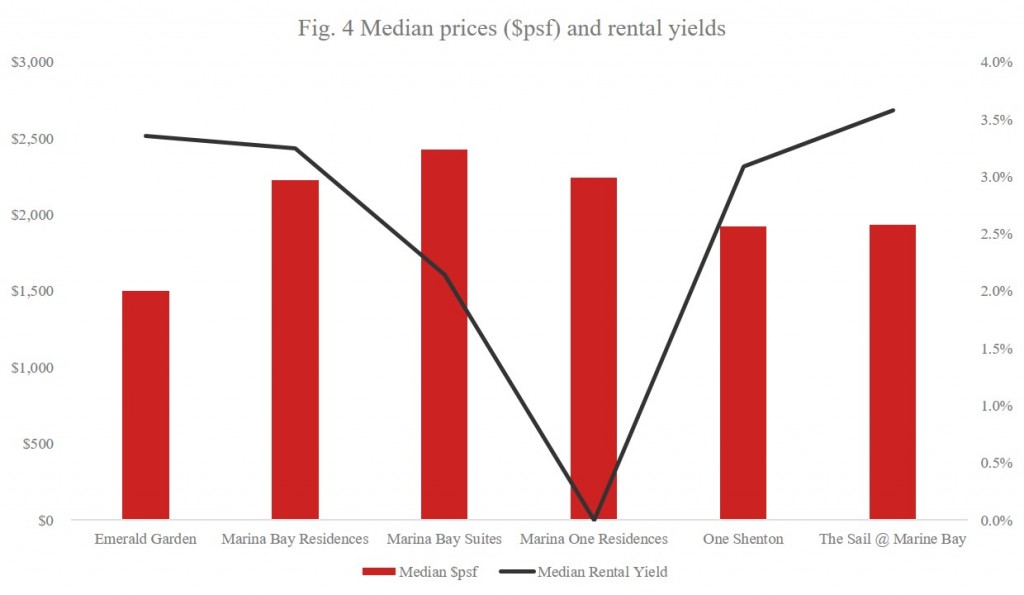 Source: URA, PropertyGuru(Note: No rental yields available for Marina One Residences as if is still under development)

Looking at the latest rental listings as of October 18, 2017, there is a 1-bedroom unit listed four weeks ago at a monthly rentof SGD17.27 psf. This is far higher than the historical monthly rental prices, especially for a 1-bedroom unit.  However, there could be some justification for it as the apartment is fully furnished.

Investors who are looking for developments with stunning views of Marina Bay, along with the accessibility, convenience, stable talent pools, and property rental yields among others, have several options with 99-year leasehold tenures.

Given the comparison choices including price, transaction volumes, and a strong tenant pool, it’s safe to suggest that The Sail @ Marina Bay offers the highest median rental yield of 3.6% when compared to the rest of the properties sampled.

However, sellers do need to take note of the falling inflow of foreigners recently, as this may translate to falling yields in order reflect the existing supply situation.

Tanjong Pagar: A district to live in