It’s been almost a year since the latest cooling measures were enforced and while overall sales transaction volume has been going down, the high-end segment continues to hold its appeal amongst property investors, which includes the rich and the famous!

From a TVB star to the daughter of a famed Malaysian tycoon – it seems like there’s no stopping the rich and the famous from snapping up a home on our tiny little island!

To start, the daughter of a celebrated Malaysian tycoon was reportedly behind one of the most expensive property transactions in 2018. Kuok Hui Kwong, daughter of the Malaysian tycoon Robert Kuok, is said to have purchased a Good Class Bungalow (GCB) for $43.5 million just a couple of weeks after the cooling measures hit on July 6. Located at 82 Belmont Road, the property spans across a 2,826 sq m or 30,408 sq ft site.

Ms. Kuok, who is the chairman of Shangri-La Asia, is said to be a Malaysian citizen and a Singapore permanent resident (PR). While non-Singaporeans are generally not allowed to purchase such landed properties, the Singapore Land Authority (SLA) has been quoted saying that a handful of PRs have been granted to buy a landed residential property in a GCB Area in the past six years due to their “exceptional economic contributions” in Singapore.

Another notable personality who moved to Singapore post cooling measures last year was veteran Hong Kong TVB actor Benz Hui. A familiar face of Hong Kong drama serials, Hui became a Yishun resident in October last year. Word on the street is that the actor moved to a private housing estate in Yishun.

Hui, 69, is best known for projects such as the crime drama Line Walker (2014), alongside Raymond Lam and Charmaine Sheh, and the movie, Love Undercover (2002), starring Miriam Yeung and Daniel Wu. 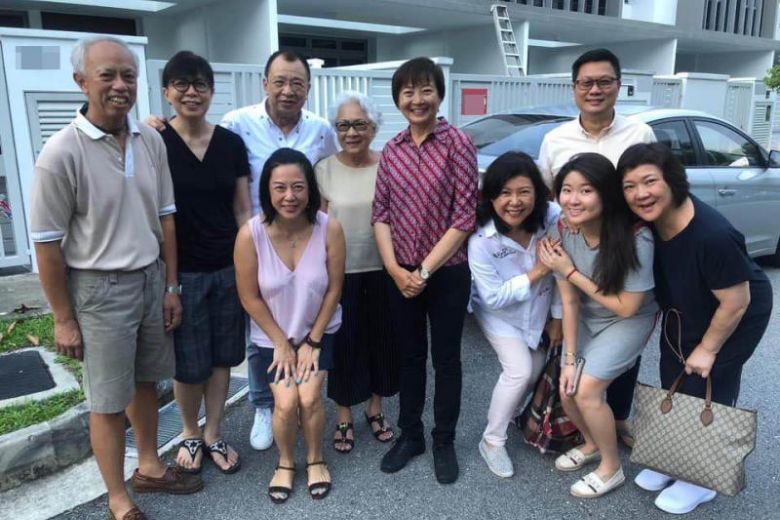 In an interview with the Chinese evening daily Shin Min Daily News, Hui spoke about his homes in Hong Kong and Singapore, adding that his family members visited Singapore whenever they had time.

Hui said he liked the Singapore environment and thought it was a good place to retire in.

Interest from foreign buyers (non-permanent residents) in the Singapore residential market has also remained robust, accounting for about 37% of new sales transactions within the prime districts in the three months following the end of 1Q2019 (as shown in the graph below).

Click for full-sized infographic! Source: PropertyGuru, URA. *Figures are accurate as at 14 June, 2019.

The project, which is a joint venture by Hong Leong Holdings, City Developments Ltd (CDL) and Lea Investments, comprises 154 units in twin 28-storey towers. In 1H2019, at least 53 units (35% of total units) at the development has been sold at an average price of $3,705 psf.

Another project that has enjoyed brisk sales within the same time period is the nearby 3 Cuscaden. Launched in November 2018, the 96-unit development moved 39 units at an average $3,585 psf in the first half of 2019. Based on URA caveats, a total of 60 units (62.5% of total units) has been snapped up at the development to date.

The buyers at these high-end projects are said to be generally foreigners, namely, Chinese investors. The city-state’s reputation as a safe haven for investors has without a doubt, continued to attract foreign investors who are interest in wealth preservation and who do not want to be exposed to risks such as political unrest or the changing of governments.

Some Hong Kong tycoons have reportedly started to move their personal wealth offshore as concern deepens over a local government plan to allow extraditions of suspects to face trial in China for the first time.

Viewed from a pricing perspective, Singapore properties also continue to be seen as being relatively affordable compared to cities such as Hong Kong, often touted as the world’s “most expensive city”. Wealthy investors seeking good buys will also take the recent price declines in Singapore properties as an opportunity to enter the market.

It is for these reasons that Singapore will continue to hold its ground as a top investment destination in the region, especially for the rich and the famous!

We wonder which other celebrities will move Singapore next…

Home buyers looking for Singapore Properties may like to visit our Listings, Project Reviews and Guides.