What does a cutback in new condo supply mean for the market?

The Government has acted to reduce private housing supply under the GLS programme for 2H2019 by 15%. Three things are expected to happen: home prices will remain stable, developers will focus on smaller sites, and there will be more demand for entry-level private housing by HDB upgraders and first-time homebuyers.

The Government has acted to reduce supply of private residential housing from confirmed sites under the government land sales (GLS) programme for the second half of 2019, due to a dip in buying demand after 2018’s property cooling measures and a large supply in the pipeline.

What does this mean for Singapore’s homebuyers and the property market at large? Here are 3 things we can expect:

The cutback comes amid oversupply concerns, with roughly 44,000 private housing units in the pipeline. This comprises roughly 39,000 unsold units from GLS and collective sales sites with planning approval, and an additional 5,000 units from sites that are pending planning approval. In addition, there are around 24,000 existing private housing units that remain vacant.

In comparison, buying demand has continued to fall since the introduction of the property cooling measures in July last year, while transaction volume has declined for the third straight quarter in Q1 2019, and developers’ demand for land also moderated, MND said.

The cutback in supply is expected to even out the supply-demand equilibrium in the local housing market.

2) Developers to focus on smaller sites

On the back of the growing unsold inventory, developers are observed to be restrained on high-unit yielding sites. This comes especially in light of impending additional buyer’s stamp duty (ABSD) remission rules on development sales success, says Desmond Sim, Head of Research at CBRE, Southeast Asia.

The latest cooling measures introduced a new, non-remissible 5% ABSD for developers when they purchase residential development sites (including en bloc sites). In addition, the remissible ABSD for residential developers has been raised to 25% from the previous 15%. If a developer fails to complete a project and sell all off its units within five years of acquiring the site, it will have to pay the 25% ABSD with interest. It is for this reason that developers tend to be more cautious when bidding for larger sites.

Out of the five residential sites in the Confirmed list, a new site along Irwell Bank Road was included, while the other four sites including an EC were transferred from the 1H2019 Reserve List.

Confirmed list of residential sites under the 2H2019 GLS Programme 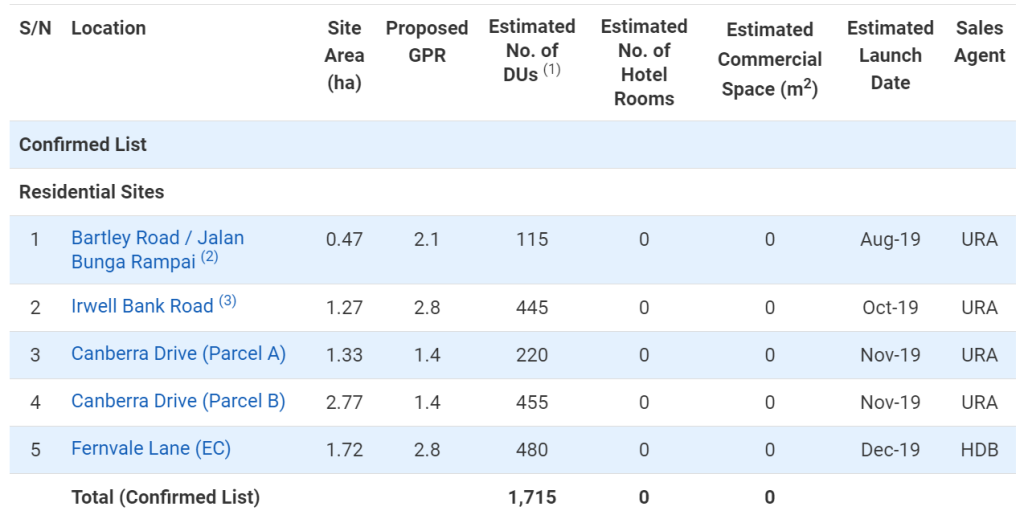 CRBE’s Sim views this as a positive move from the state planners. “The site dissection has made the sites (Parcels A and B) more palatable for developers to consider,” says Sim.

Meanwhile, Ong Teck Hui, Senior Director of Research and Consultancy at JLL, says that the Irwell Bank Road site within the prime districts stands out as an attractive prime site. “It is in the vicinity of numerous upmarket residential developments, including New Futura,” he says.

However, being a sizeable development that could generate 445 units, the absolute land price is likely to be high and developers are expected to be cautious in bidding for the site, given the oversupply in the prime sub-market, says JLL’s Ong.

3) More ”entry-level” projects in the pipeline

The two parcels at Canberra Drive (Parcels A and B) are sites that would generate entry-level private housing that would be in demand by HDB upgraders and first-time homebuyers, says JLL’s Ong.

Of the two, Parcel A appears to be the more attractive site, as it is regular in shape, smaller (220 units) and is more affordable. On the other hand, Parcel B is oddly shaped and is much larger (445 units). However, as both sites are located near the future MRT station at Canberra Link, there should be fair interest from potential bidders, he adds.

Lastly, the EC site at Fernvale Lane is likely to see healthy demand from developers as the supply pipeline for ECs, while increasing, is not excessive. However, bids may be moderated as supply is not as tight as before and market conditions could be less buoyant.

Feeling the pinch of paying more upfront after new measures in 2018? Turn back time and save on your new home with the biggest deals in town! Get it now at: www.propertyguru.com.sg/gurudeals