A total of 780 Tengah BTO flats will be offered during the May 2021 HDB BTO launch, with 2-room Flexi, 4-room and 5-room units available. As Singapore’s first “Forest Town”, Tengah will be imbued with lots of greenery and will also be Singapore’s first car-lite town.

In addition, the BTO project will be closely located to the upcoming Hong Kah MRT station on the Jurong Region Line (JRL). Jurong Lake District and Jurong Innovation District also won’t be too far away. As a plus, Tengah BTO prices are relatively reasonable compared to most BTO projects. 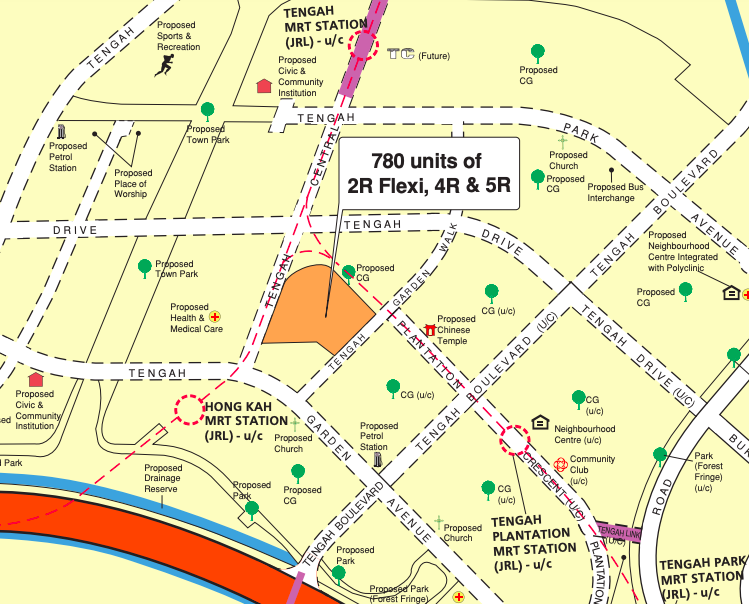 Residents will find themselves only minutes away from Hong Kah MRT station, which will be part of the upcoming JRL. With the eventual opening of the line, prices of the Tengah BTO flats could possibly see an uptick.

The proximity of the Jurong Lake District to the BTO flats could also add to the increase in property value.

That said, based on HDB’s location map, residents will only be able to access amenities like shopping malls and schools in neighbouring estates. For example, the nearest mall will be West Mall in Bukit Batok. However, it’s likely that mall amenities may be planned for Tengah estate itself in the future.

Nature lovers will be happy to know that there will be lots of greenery within the town in the form of community gardens and parks. If you’re thinking of getting a BTO flat here, you may want to choose a higher floor to avoid dealing with mosquitoes and other insects.

For those who enjoy keeping fit, there’s a proposed sports and recreation centre not too far away.

Additionally, there will be a number of healthcare facilities within the proximity of the estate. In fact, there are plans for a health and medical care facility to be built right across the road from the BTO project.

Prices for the Tengah BTO have yet to be released. However, it’s likely that prices for the May 2021 launch will be quite similar to those in the November 2020 launch.

While one could expect an appreciation in property values, this could take a while due to the longer timeline for developments near Tengah. For example, the Jurong Region Line will only be fully operational in 2028, while the Jurong Lake District will be fully realised in 2040 and beyond.

There are currently no resale prices to benchmark against as there are no Tengah flats that have reached MOP yet.

The Tengah BTO flats will be about a 5-minute walk away from Hong Kah MRT station. The station will open in 2026 and will be part of the upcoming JRL.

With the entire line operational in 2028, getting around the west will be a breeze. Choa Chu Kang MRT station will be only three stops away, where residents can hop on the North-South Line (NSL). Residents will also have quick train access to areas like Jurong East, Jurong West, and Bukit Batok.

One of the major features residents can look forward to are Tengah’s many green attractions.

The estate will have community gardens, a central park, and lots of greenery. Roads in Tengah will mainly be used for pedestrians and cyclists, and the town will have Singapore’s first car-free town centre.

As part of Singapore’s decentralisation efforts, many job opportunities and businesses will be situated in close proximity to Tengah.

All in all, Jurong Lake District will give residents access to a wide range of jobs, retail options, and recreational activities. However, the district is only expected to be ready from 2040 onwards.

In addition, the future Jurong Innovation District will be in the vicinity, bringing more jobs closer to home for residents. The first phase of this district is expected to be complete around 2022.

Health and sports amenities within Tengah and surrounding estates

A health and medical centre will be located just across the road from the Tengah BTO flats. There are also plans to build a polyclinic within walking distance from the BTO units. In addition, two other health and medical care facilities are being proposed to be built a short drive away.

Health amenities aside, there are plans to build a sports and recreation centre not too far from the BTO flats. Other sports amenities such as Jurong East Sports Centre and Bukit Batok Swimming Complex can be found in neighbouring estates.

West Mall will be the closest shopping mall for residents living in the Tengah BTO units. The mall will be about a five to 10-minute drive from the BTO estate and about 20 minutes away by bus.

However, this does not mean residents won’t be able to get food and daily essentials nearby. There are plans to build a neighbourhood centre that’s about a 15-minute walk away from the BTO project.

Many primary and tertiary schools in surrounding estates

Although there aren’t any schools near the BTO flats yet, there’s a wide range of educational institutions in nearby estates. This includes primary schools such as St Anthony’s Primary and Jurong Primary, and tertiary institutions like Millennia Institute and Hua Yi Secondary.

Conclusion: Is this Tengah BTO worth balloting for?

The Tengah BTO flats will have good public transport access, and will be near exciting business hubs in Singapore. Although plans for schools and mall amenities seem to be lacking for Tengah at the moment, the many green attractions may be a plus.

One consideration buyers might want to keep in mind is the estate’s proximity to Tengah Air Base. As such, blocks in the area will not be more than 14 or 15 storeys high. This may be a deal-breaker for those keen to live only on high floors.

Pros and cons of the May 2021 Tengah BTO

The Tengah BTO flats will be an ideal location for those who love greenery and want good MRT access. Also, those with a tighter budget may find this project suitable based on past Tengah BTO prices.

Compared to other BTO launches in May 2021 such as Geylang and Bukit Merah, the Tengah BTO project will also probably be less competitive.

Where is Tengah new town?

Tengah new town is located in western Singapore. The town is bordered by Bukit Batok and Choa Chu Kang in the east, and Jurong in the south and west.

How do I apply for a HDB BTO?

Wait for one of HDB’s quarterly BTO sales launches in February, May, June, or Nov. After checking your eligibility, submit your flat application through HDB InfoWEB on the HDB website during the 1-week application period.

When will Tengah BTO be ready?

In general, BTO projects take three to four years to complete. Some can be completed in as soon as 2.5 years.

When do I need to pay the downpayment for the HDB BTO?

You’ll need to pay the downpayment when you sign the Agreement for Lease with HDB. This will be within four months of booking your flat.

Find out more about estates in the May 2021 BTO launch here:

Head over here to read more of such property guides.