Is it worth getting a lower floor, pool-facing condo if higher floor views are expensive?

When choosing a home, buyers usually look for a unit that’s north-south facing (to avoid rising and setting sun), higher floor/windy (which comes at a price premium) and a beautiful view.

Depending on the buyer profile, “beautiful view” is subjective, but a poem on a condo discussion site ten years ago sums up the common preferences best:

While higher floor views that face the sea or lake are popular and more expensive, there’s no guarantee that the adjacent land in front of your premium view may someday be redeveloped with another high-rise or marred by an inauspicious structure or event that’s not within your control.

The cheaper alternative is the pool view, especially on the second floor, because at that level, the apartment:
a) offers an elevated and guaranteed view of the pool (ie. the alfresco resort feel)
b) is far less expensive than the 1st floor (due to the extra patio) or higher floors with premium views

Whatever the choices, developers would have already applied a price premium if the unit faces a pool (usually between 1-3%) compared to non-pool-facing units. The question then is, has this premium changed with resale demand?

Flanked by Tampines Avenue 10 and Tampines Street 86, The Santorini, a development by MCC Land, TOPed in 2018 with 597 units.

Living up to its namesake, the condo’s design, particularly its pools, are based around the resort island theme of Greece’s Santorini.

To own a home with a verandah overlooking the tranquil pool would be ultra-special since we did mention The Santorini’s pool feature as one of the development’s key attractions.

As the development is less than 4 years old, there hasn’t been that many transactions of 2nd-floor units, but we managed to uncover a few.

While we won’t know the exact circumstances behind each sale, such as the buyers’ and sellers’ profiles or preferences, or the interiors and actual balcony views of both apartments, the data seems to suggest that pool-facing units, at least for the 1-bedroom 2nd-floor ones, did well at The Santorini. 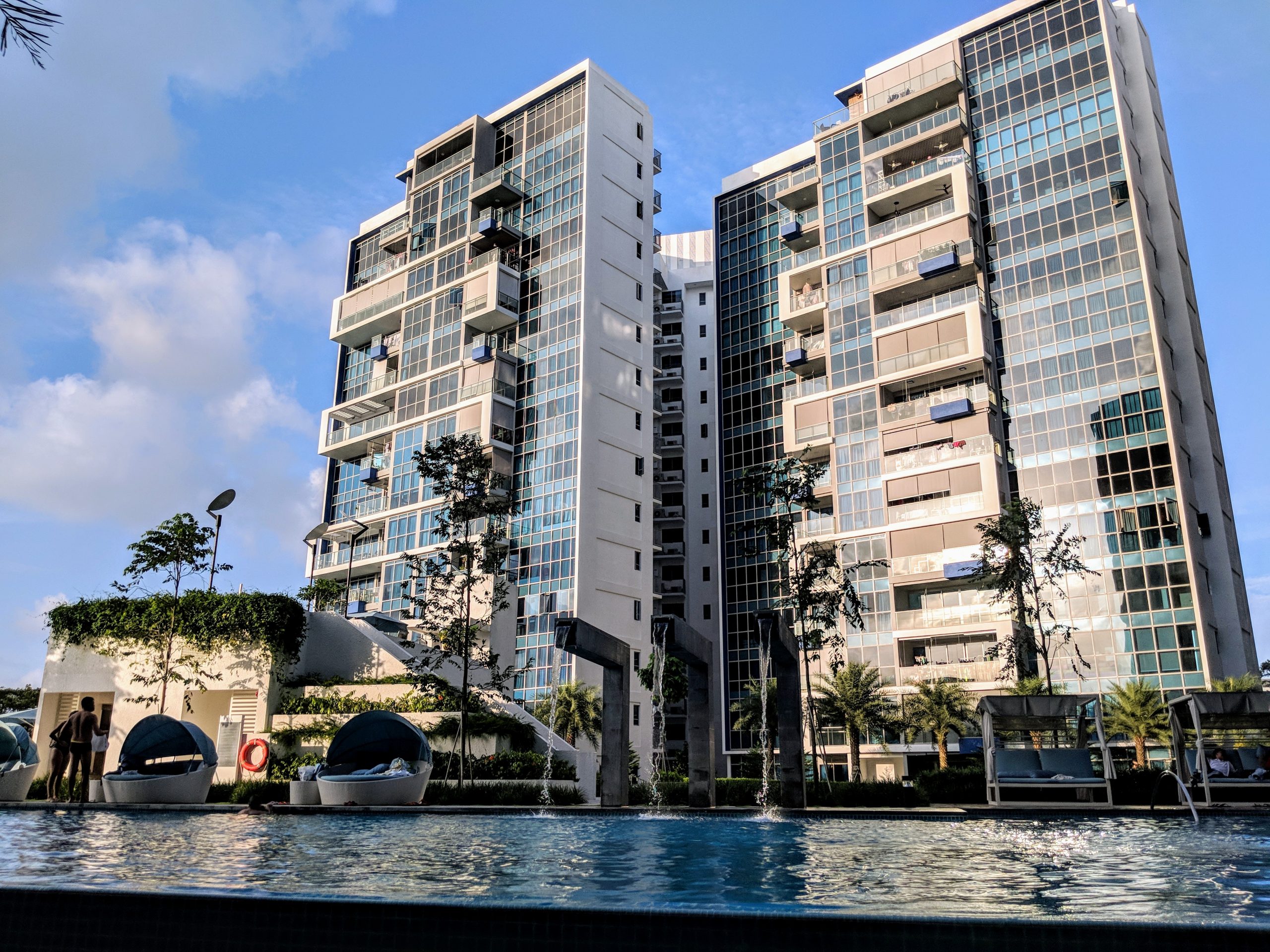 Another interesting development would be Prive, the executive condominium in District 19 (Punggol). 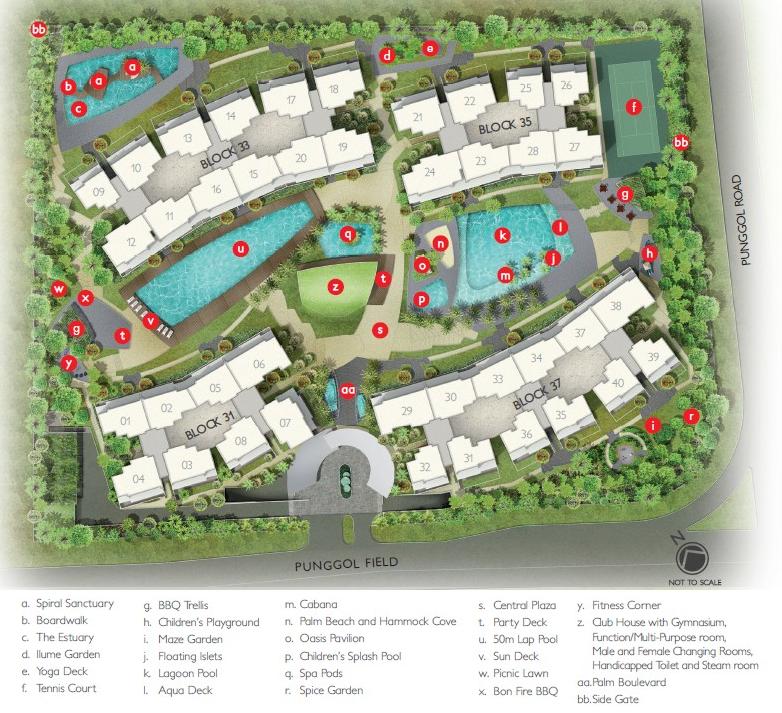 While both the pool-facing and non-pool-facing apartments had different layouts (C3 and C2), they had the same floor area and the number of bedrooms.

What’s interesting is that both transactions happened at roughly the same period, which gives us some leeway to rule out extraneous factors like an economic crisis or cooling measures (actually, the 2018 ABSD cooling measure was introduced in July), but since this is an executive condominium, both units were probably resold to Singaporeans or PRs who weren’t as affected by the ABSD adjustments.

We should point out that despite being a low-floor unit and facing a set of HDB blocks, the non-pool-facing unit had a relatively healthy appreciation in price.

As the saying goes, not all pool views are created equal.

Located at 21 Jalan Sempadan (District 15 – Siglap), Villa Marina is a 432-unit on a 99-year lease. It was completed in 1999, making it the oldest development we’re looking at for this article.

It also means there have been several resale transactions of the 2nd-floor pool and non-pool units since then. 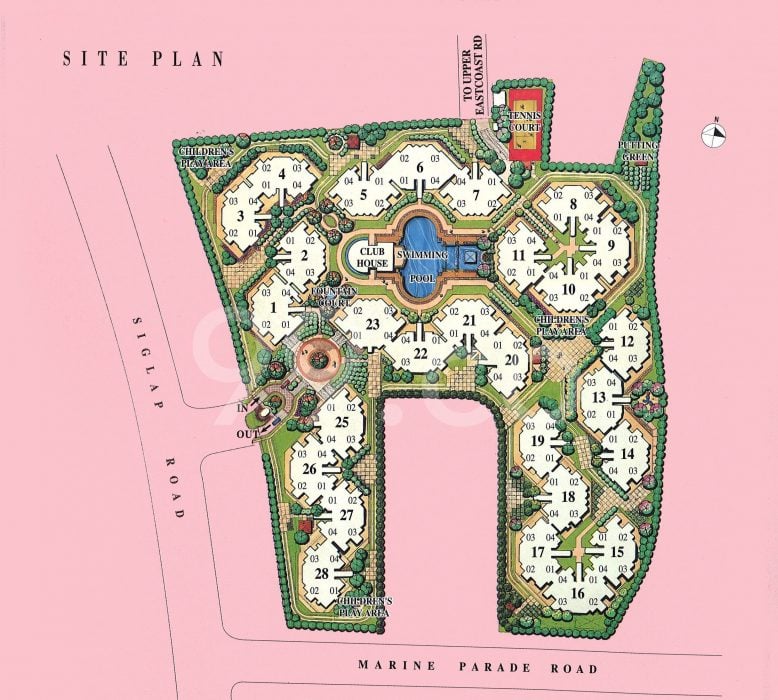 Villa Marina has an interesting layout. Design-wise, it’s been compared to a French villa, with pitched roofs, Georgian columns and French windows.

Most of the other blocks either face each other or look outward towards the Kampung Siglap mosque (between blocks 27 and 17), Indonesia school (blocks 3 and 1), Marine Parade road or neighbouring low-rise residences.

To the north, residents in blocks 4, 5, 6 and 7 overlook an empty tract of land, which is marked for future residential development with a gross plot ratio of 1.4.

Anyway, if you look at the photo below, pool-facing homeowners on the 2nd floor are separated by a lawn. This means that instead of a pool view, lower-floor residents may only be seeing a garden view from their windows.

If you’re living here, maybe you could tell us? 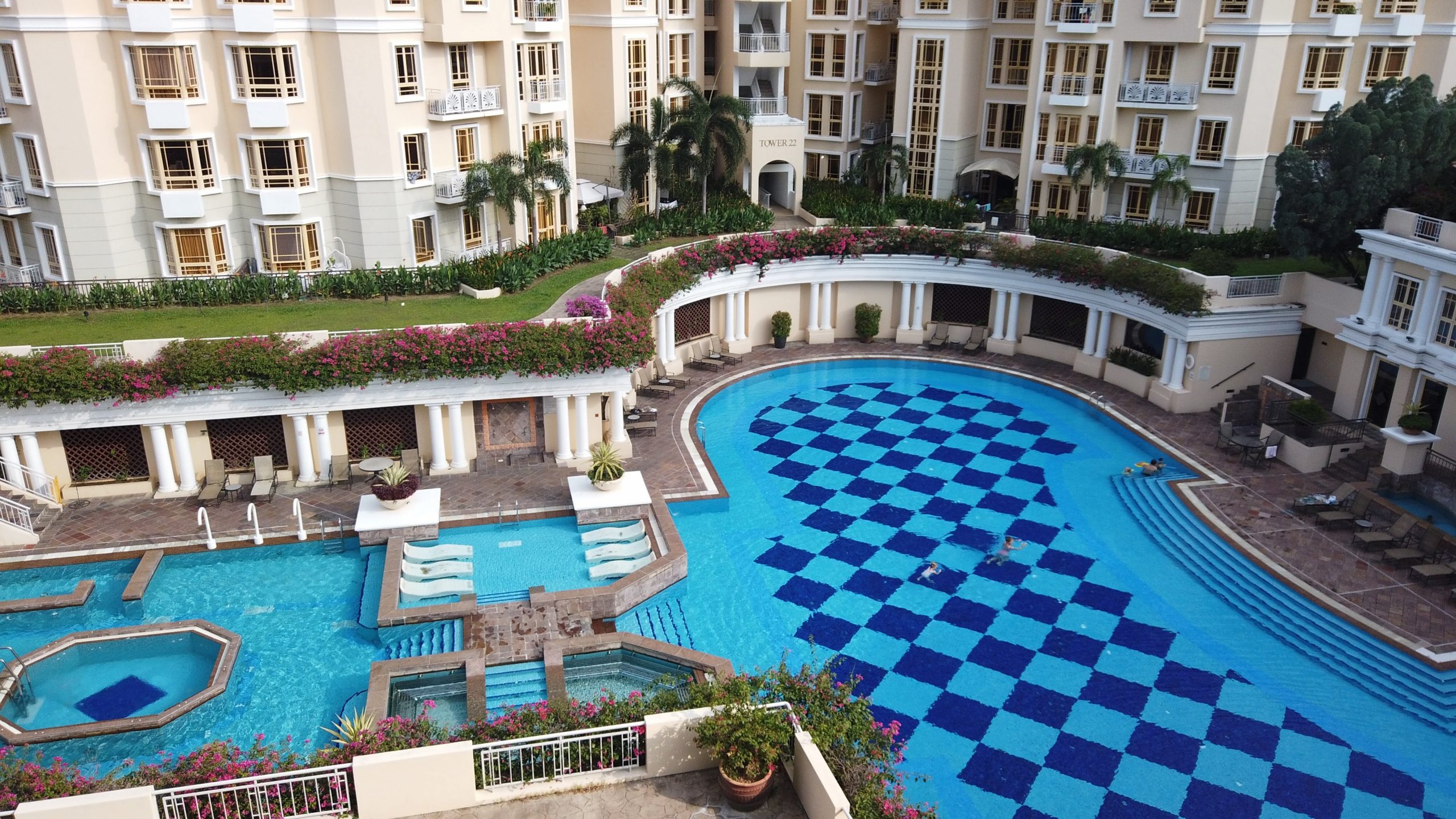 Anyway, based on the four different transactions above, it seems that between 1998 and 2011, both (presumably) pool-facing 2nd-floor units at blocks 21 and 22 had lower psf price appreciations compared to their non-pool-facing units.

For instance, the 2-bedroom unit at block 22 saw its psf price rose by almost 30%, but the same-sized unit at block 16 increased by 33.94% over roughly the same period.

Similarly, the 3-bedroom unit at block 21, which is next to the pool, had a price appreciation of 62.73%, but its non-pool-facing counterpart at block 1 (which faces the Sekolah Indonesia building) fared better with 78.23%.

One possible reason is the normalisation of the psf price at the time, regardless of whether they’re near the pool or not. While the non-pool-facing units were initially sold at a lower price than the pool-facing units in 1998, no one really saw the need for a pool-facing premium in 2011.

Another reason could be the fact that Villa Marina only had one pool, so the crowd and noise level around the adjacent blocks could be higher.

So if you’re a home-buyer keen on getting a condo unit but do not want to pay more for a higher floor, there may be some potential value in getting a lower floor that faces (or offers a view) of the pool.

Just make sure it faces the right kind of swimming pool and if you’re into feng shui, the right direction.

Are you intending to get a condo with a pool view? Tell us why in the comments section below or on our Facebook post.

If you found this article helpful, 99.co recommends Bishan HDB flats with stunning condo pool view is the very definition of ‘free rider’ and This is How to Pick the Best Units at a New Condo Launch.

The post Is it worth getting a lower floor, pool-facing condo if higher floor views are expensive? appeared first on 99.co.

Option to Purchase (OTP) For Private and HDB Properties in Singapore: What You Need to Know