While The Clement Canopy is arguably best known for being the world’s tallest concrete Prefabricated Prefinished Volumetric Construction (PPVC) structure, it is the landscaping at this 99-year leasehold project that steals the show. The 505-unit residential development, which sits in the heart of District 5 close to Clementi, has been built around the ethos of ‘eco-living in the sky’.

The harmonious integration of high-rise, high-density living with nature and lush landscaping at the two 40-storey towers has already captured the imagination of buyers, with 100 percent of the units already sold. Optimising the functional, far-reaching green space at ground level and spacious interiors in the one- to four-bedroom units, which average 972 square feet in size, with an array of upscale amenities, The Clement Canopy appeals to a wide, discerning demographic. 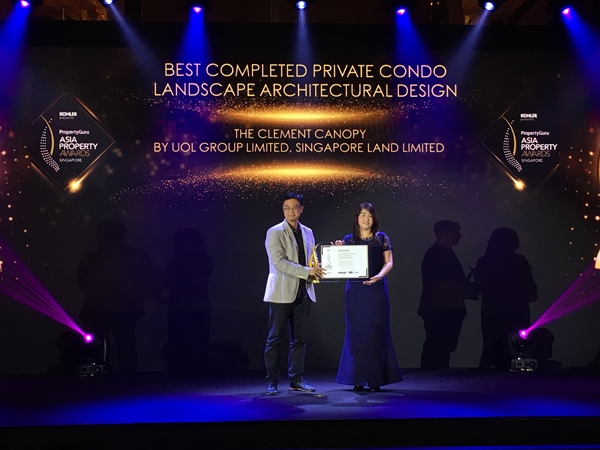 Residents are treated to a forest theme throughout the property: emphasised by the illusion that the buildings are integrated into the existing nature. The minimal basement work on each of the towers, in addition to the surrounding trees that will eventually subsume the architecture and thoughtful touches like the waterfall pits and walls, single out the landscaping by Ecoplan Asia. Moreover, the organically shaped pool that meanders around the large column-like trees simulates natural formations, while under-storey plantations comprising a variety of ferns creates a tranquil and gentle environment with visual depth.

“Preserving natural contours set against high-rise geometric lines, The Clement Canopy by UOL Group and Singapore Land features an almost magical setting with a pool meandering round trees and a spectacular waterfall wall from which dramatic, reflective glass pods seem to float: an intimate, three-dimensional and lush delivery which cleverly stitches different functional components together,” according to the judging panel of PropertyGuru Asia Property Awards (Singapore).

The Clement Canopy is a convenient spot for those working close to, or studying at, educational institutes within the Kent Ridge Educational Belt and One-North, such as the National University of Singapore. Connectivity to the CBD and other key commercial hubs, such as Jurong Lake District via Clementi MRT station, is also a major boon for homeowners.

The Clement Canopy is the latest residential development to stem from the hugely successful collaboration between industry stalwarts UOL and Singapore Land Limited (SingLand) following on from the 445-unit 99-year leasehold condominium Thomson Three, which was completed in 2017.

A unit of United Industrial Corporation (UIC), SingLand became Singapore’s first public listed property company in 1963 and has since become synonymous with major real estate projects across the island, including Singapore Land Tower, Tampines Plaza, West Mall and Marina Square. It delisted from the Singapore Stock Exchange in 2014 and currently operates as a public non-listed company.

It has been another monumental year too for UOL Group at the Awards. In addition to bagging multiple gongs for four completed and launched properties, including Best Luxury Condo Development for MeyerHouse, Best Completed Private Condo Development for Principal Garden, the firm also took home the coveted Best Developer 2019 trophy.