Update as of 16 October 2021: Two OEM electricity providers – iSwitch and Ohm Energy – have recently announced that they will be exiting the electricity market in Singapore. Some reasons include the volatile electricity market that made pricing plans lower than the regulated tariff unsustainable and rising fuel costs.

There’s also a Reuters report stating that SilverCloud Energy, which supplies power to commercial, industrial and residential buildings have similarly announced its exit from the market. 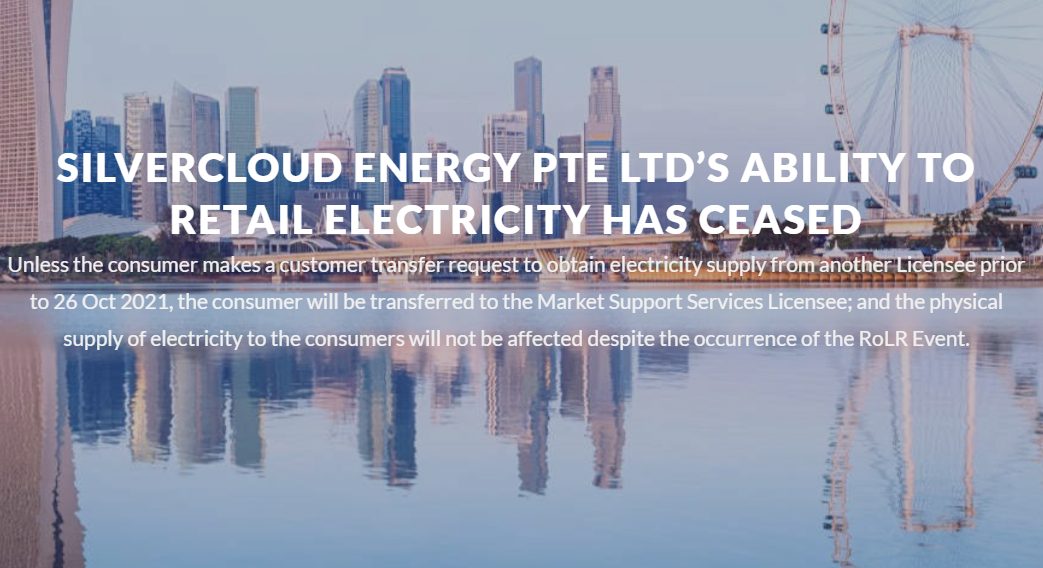 Also, it is understood from this report that Diamond Electric currently only features a zero-per cent discount off the prevailing regulated tariff (with a note saying that ‘this plan is temporarily not available’) while Best Electricity’s website no longer has information on its plans. Since 2018-2019, when the Open Electricity Market (OEM) officially rolled out across the country, Singaporeans are no longer restricted to purchasing their power from SP Group. What’s the rationale behind the OEM? How do you switch to another electricity provider? What type of plans are available? In this article, we cover all that so you can decide whether to make the switch.

What is the Open Electricity Market (OEM)?

It’s an initiative that was launched in March this year by the Energy Market Authority (EMA). The OEM allows you to choose between electricity retailers in the same way you can choose between, say, telcos. But it’s not necessary to switch if you don’t want to; you can keep buying from Singapore Power Group (SP Group).

Also, note that SP still maintains and operates the power grid, so reliability is unaffected when you switch to a retailer.

How does the Open Electricity Market work?

Under the OEM, consumers can now shop for electricity plans from a wide range of providers. The goal of this initiative is to liberalise the local retail power market, and allow consumers to benefit from “competitive pricing” and “innovative offers”.

Prior to the OEM, only businesses with monthly electricity consumption of 2,000-kilowatt-hours (kWh) and above could decide which provider to purchase their electricity from.

When will I get to switch my electricity provider?

After a successful soft launch of 108,000 homes and 9,500 businesses in the Jurong, households and businesses with postal codes 58 to 78 — about 350,000 accounts — can also choose to switch to an electricity retailer of their choice from 1 November 2018 onwards.

Subsequently, the OEM will be progressively rolled out across the country. The phased roll-out will be done in four batches, and the second batch will get to choose their energy retailer from 1 January 2019 onwards.

The diagram below illustrates the rest of the roll-out; by 1st May 2019, all consumers in Singapore will be able to switch their energy providers.

What’s the point of switching providers?

In a broad sense, competition helps to keep prices low, as each retailer is fighting to get customers. It also encourages innovation and productivity among the competing companies, so we customers can get a better deal.

Most plans offered by electricity retailers are 12 to 24-month contracts, although some retailers differ. For example, Tuas Power has a plan that’s only 6 months so you can test it out. If you’re interested, check what you have to pay after 6 months and see if it’s lower than your usual bill.

What are the different electricity plans available?

The Energy Market Authority (EMA) stipulates that electricity providers offer two standard price plans. That said, there are three types of price plans available, which you can pick to suit your needs: 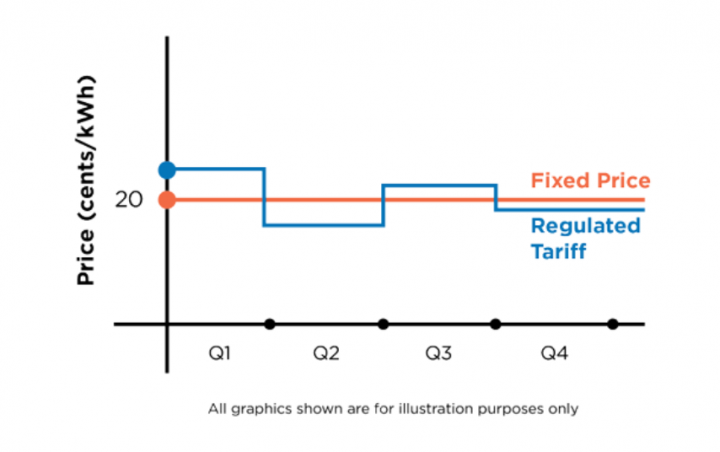 Fixed Price Plans are pretty self-explanatory; you pay a fixed rate for the electricity you use (e.g. 16.27 cents per kWh) throughout your entire contract.

Fixed Price Plans are likely to be more suited to business owners who want to keep their energy costs fixed, making it easy for them to plan and estimate their expenditure.

This plan is also worth a second look for residential landlords who rent out their entire apartments since this makes clear how much electricity charges to factor into the rent. 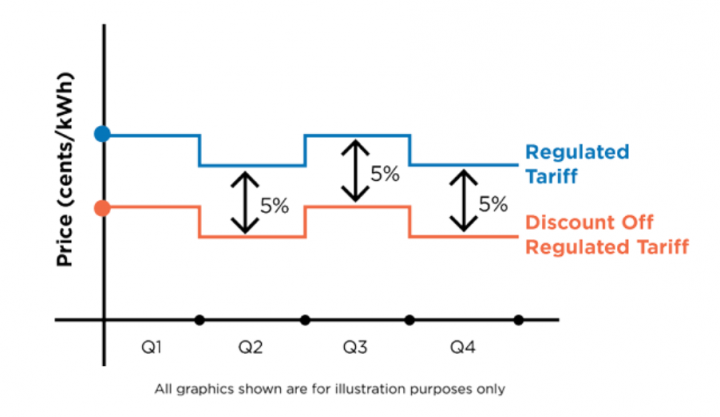 The Discount Off Tariff (DOT) plans, on the other hand, give you a discount off the prevailing regulated tariff price. The tariff price is revised every quarter, and it’s currently 25.80 cents / kWh until 31st December 2021.

While taking this plan does mean the price fluctuates, it also means you’ll always pay less than you would if you bought from SP.

This is probably the OEM plan most homeowners will settle for.

Other than the above two standard plans, there’s also the non-standard On and Off-Peak Plans. Under this plan, you get charged more at certain (peak) hours and charged less at other (off-peak) hours. This is pretty much the same way your Grab app works.

By charging different prices for electricity usage based on the time of day, those who work the night shift or keep late hours, for instance, may find these plans the most cost-effective option.

Note that such plans will only save you money if you have (1) a well-established routine, that lets you predict when you’ll be drawing power, and (2) you consistently use a lot of electricity at odd hours.

Some OEM retailers offering this plan include Pacific Light and Keppel Electric.

What else can you get?

Some plans will give you additional benefits. For example, if you care about the environment, go solar. Sunseap, an OEM electricity retailer, gets power from solar panels connected to the grid. These panels have been progressively installed on the roofs of residential buildings, including HDB flats, across the island.

Some OEM retailers like Tuas Power and Senoko Energy give you rebates and smart rewards for buying electricity.

For now, you’ll have to manually shop around to compare between retailers. But wait a while; we’re sure a gazillion comparison sites will spring up to help you compare between them, right alongside credit cards, personal loans, travel insurance, etc.

What about the Transmission Loss Factor (TLF) that everyone is on about?

The TLF refers to the energy that’s lost in the process of delivery. And even though it was lost in delivery, you may still need to pay for the total amount delivered, just like with your Taobao agent.

Previous retailers who passed on these charges to consumers include Keppel Electricity, Pacific Light, and Sembcorp Power Pte Ltd – but this list isn’t comprehensive and other retailers may as well (ask before you sign the contract).

TLF charges are likely to be small, adding around 3 to 4% to the total bill, if they still do so.

At the time of writing (16.10.2021), there are 10 OEM electricity retailers in Singapore, but it’s good to check on the latest list here. These include:

How to switch to an electricity retailer?

Once you contact the retailer and sign up with them, they’ll work directly with SP to take over. The only thing you may need to do is install a smart meter if you have a peak and off-peak plan. This costs S$40 (before GST).

A little bit of competition helps to keep prices down, or at least give you more freebies for your power usage. Still, we think a bit of laziness might stop the switch at first — not everyone can be bothered to check their power bill and project the savings. It will catch on in time.

To compare the pricing plans that the different electricity retailers offer, click here.

Do you have any queries in relation to switching OEM retailers? Let us know in the comments section below or on our Facebook post.

If you found this article helpful, 99.co recommends Quick guide to setting up utilities in Singapore for your new home and 3 simple things you wish you knew (that could save you money) before collecting your house keys.

How can I switch my electricity plan from Singapore Power (SP) to an OEM retailer?

Once you contact the retailer (easiest is via the Energy Market Authority-hosted Open Electricity Market’s website at ema.gov.sg/retailers for the latest list of retailers) and sign up with them, they’ll work directly with SP to take over. The only thing you may need to do is install a smart meter if you have a peak and off-peak plan. This costs S$40 (before GST).

Why would I want to switch my electricity plan from SP to an OEM retailer?

In a broad sense, competition helps to keep prices low, as each retailer is fighting to get customers. It also encourages innovation and productivity among the competing companies, so we customers can get a better deal. Most plans offered by electricity retailers are 12 to 24-month contracts, although some retailers differ. For example, at the time of writing, Tuas Power has a plan that’s only six months so you can test it out. If you’re interested, check what you have to pay after six months and see if it’s lower than your usual bill.

What are the different electricity plans available?

The Energy Market Authority (EMA) stipulates that electricity providers offer two standard price plans. That said, there are three types of price plans available, which depends on whether the OEM retailer chooses to offer or not. Pick the one that suits your needs: – Fixed Price Plan – Discount Off Tariff (DoT) Plans – On and Off-Peak Plans